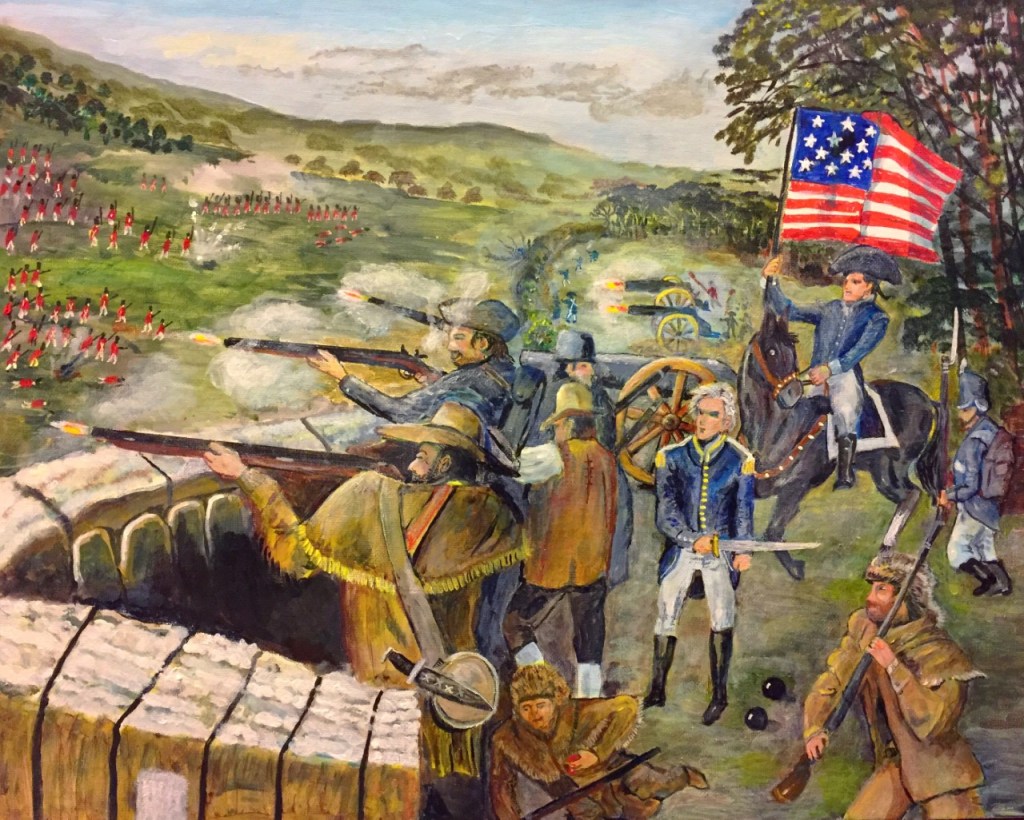 Pike County resident Michael Benton designed this painting on request for the book "War of 1812: The Battle of New Orleans."

Stranger things have happened. But not much stranger than a written conversation between Pike County artist Mike Benton and General Andrew Jackson.

It was during the War of 1812 at the Battle of New Orleans that Jackson shook Benton’s hand. “So you desire to preserve our cause by painting battle scenes, do you?”

“Yes, sir, so that our children and their children will be able to see what we’ve done to keep our nation sovereign,” Benton said.

Mike Benton closed the book titled “War of 1812: The Battle of New Orleans” and made no attempt to hide the smile that pushed at the corners of his lips.

Just how it happened that Benton and his childhood friend, Michael Fowler, reconnected after 40 years and he became the cover artist for Fowler’s book, “War of 1812: Battle of New Orleans” and also a character in the book was more than chance, Benton said.

“Michael and I grew up in Union Springs but he moved away when we were young boys and we lost touch,” Benton said. “The way we got back together was we’re both interested in history. I had posted some of my paintings of ships on Facebook and Michael Aye, a writer of historical fiction, complimented on them. He was over in Albany, Georgia. Somehow we got to talking and I mentioned I was from Union Springs, Alabama. He said grew up there and that his real name was Michael Fowler. I asked him if he was that kid we called ‘Whitey’ because of his white hair. And it was him.”

“I knew Michael Fowler was a medical doctor but I had no idea he had written 15 novels under the pen name, Michael Aye,” Benton said.

The first time the two met after so many years was when Fowler came to TroyFest and visited with Benton.

“Michael bought a couple of my pieces and we renewed our friendship,” Benton said. “He liked my work and asked if I would be interested in doing a cover for his book on the War of 1812. I was honored and excited to be asked.”

Fowler outlined what he would like on the cover: Regular soldiers of the era, some volunteers, Davy Crockett-like figures with flintlock rifles, three cannons and cotton bale blockade.

That required a lot of research and Benton hit the books.

And to Benton’s surprise, not only was he going to be the cover artist for the book, his childhood friend was going to make him a character in the book.

“I was going to be Mike Benton, the artist who painted figures and sketched scenes of the Battle of New Orleans,” Benton said. “In the book, I was riding on horses and in carriages and talking to General Jackson.”

And Fowler also included Benton’s wife, Kitty, in the story.

“I didn’t marry Kitty Earles but she was the object of my affection,” he said, laughing.

Everything was moving along as scheduled, then disaster struck. The Bentons’ home burned and with it the painting for the cover of Michael Aye’s “War of 1812: The Battle of New Orleans.”

Fortunately, Benton had saved the image on his computer and was able to re-create the cover just in time to meet the publishing company’s deadline.

At the event, Benton will exhibit his historical paintings, primarily the ships.

His fascination with ships began has a young boy when comic books invited kids to “draw me” to see if they had talent.

“The one to draw was usually a pirate,” Benton said. “I can’t tell you how many pirates I drew. And ships. I watched movies like ‘Master and Commander,’ ‘Mutiny on the Bounty’ and ‘Long John Silver.’ I can still see Burt Lancaster hanging from the mast of a ship with a knife in his teeth. Ships and pirates fascinated me as a boy and as a man.”

Benton’s first artwork was done in charcoal. When he got tired of black and white, he began drawing with pastels.

“That’s when I discovered color,” he said. “And with that discovery, I began using acrylics and oils. And, I still love pirates and ship, landscapes and seascapes.”

And, almost as much, he enjoys painting “history.”

“Michael has asked me to do more covers for him and I’m looking forward to that,” Benton said. “I love history so I enjoy the research and then putting the paint on the canvas. History and art bring me a lot of enjoyment and I enjoy sharing what I do with others.”