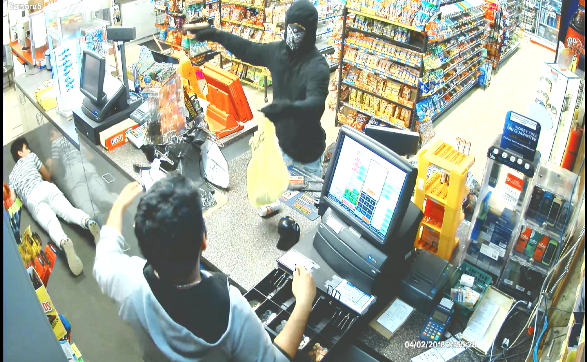 Video surveillance shows a masked robber with a semi-automatic handgun ordering a store clerk to hand over money while another employee lies face down behind the counter.

A man armed with a semi-automatic handgun walked into a Troy convenience store Monday night and forced a customer and employee to lie face down on the ground while the other employee took out money from the register.

Troy police chief said the man entered the store in the 22000 block of U.S. Highway 231 North at approximately 10 p.m. dressed in a black jacket with a hood, black gloves and a bandana covering most of his face.

“There was a customer at the counter making a purchase when the suspect entered the store with weapon in hand,” Barr said. “The clerk took an undisclosed amount of cash out of the register and placed it in a yellow Dollar General plastic grocery bag provided by the suspect. The suspect then left the store on foot and was last seen running toward the rear of the store.”

Barr described the suspect as a tall, slender black male wearing blue jeans and dark shoes in addition to the jacket, gloves and bandana. He described the handgun as silver over black.

This case remains under investigation. No injuries were reported.