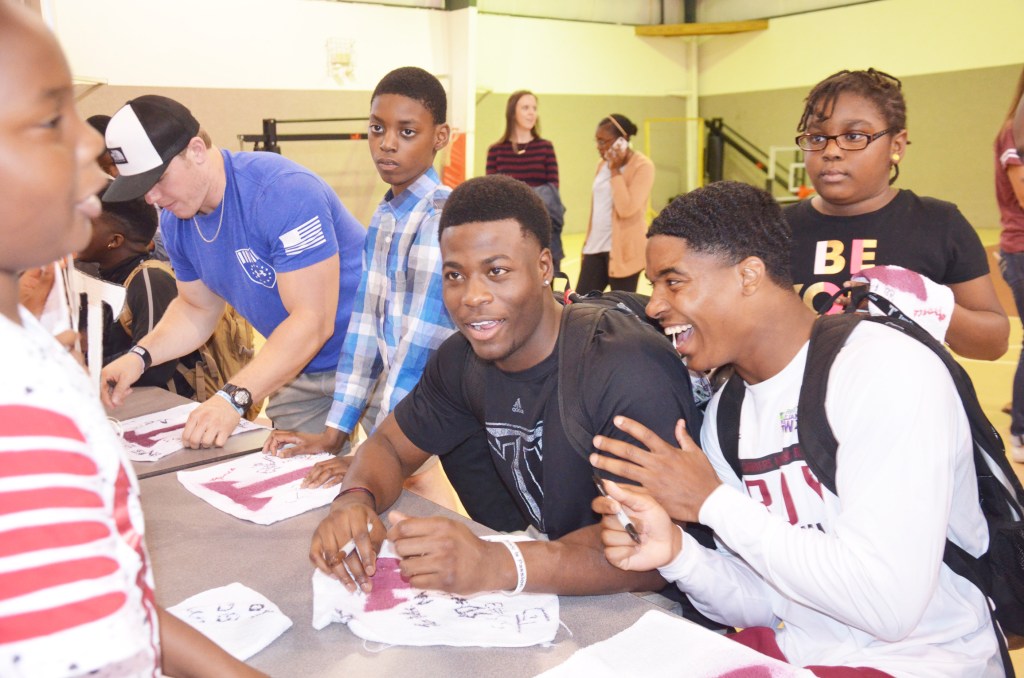 Kevin Nixon, left, and Terrence Dunlap, right, shared words of wisdom and loads of laughs with the boys and girls at the Boys and Girls Club in Troy on Monday. A large group of Troy University football players visited with the kids and encouraged them to never give up and hang with the good guys.

The Pike County Juvenile Probation Office’s idea to partner with other agencies in the community to impress upon young people the importance of education and hard work has a good shot at paying great dividends.

Members of Troy University Trojan football teamed visited the Pike and Surrounding Counties Boys and Girls Club in Troy Monday and shared with the youngsters the importance of education and hard work.  And, just as importantly, they said, was listening to and respecting those in authority and “hanging out with good guys.”

Trey Coryell told the gathering of boys and girls that, for a while, he wasn’t an attentive student and even failed a couple of classes. His negative attitude toward school caused him to not be able to play the game he loved. That’s when he realized that an education paves the way to opportunities and to success and, if he wanted to experience success, he had to do an about-face.

As a student, Walter Pritchett was the opposite of Coryell. He was a good student and took pride in his work.

“We got gold pins for good work,” he said. “I had gold pins all over my hat. Some kids had told teeth, I had a gold hat.”

“And it bit me in the butt,” he said. Pritchett was one of the lucky ones. He realized that he was on the wrong path. Had he continued on that path, he probably would not be in college and on a championship football team.

The message all the Troy Trojan football players had for the boys and girls was to “listen to your parents, surround yourself with good people, keep trying, never give up and don’t laugh at nerds because they are the ones who will be successful.”

All of the Trojan football players were volunteers. Nobody pushed them to visit the Boys and Girls Club.

Terrence Dunlop summed up the reason they were there.  “We love the kids and want them to know how important education and doing the right things are.”

Meredith Weaver, Pike County Juvenile Probation Office, said at the juvenile probation office, they were proud to have partnered with other agencies in the community to provide an event that encouraged boys and girls.

“We want to them to know and understand how important it is to never give up on their dreams, never let one bad decision define their futures and the importance of education,” Weaver said