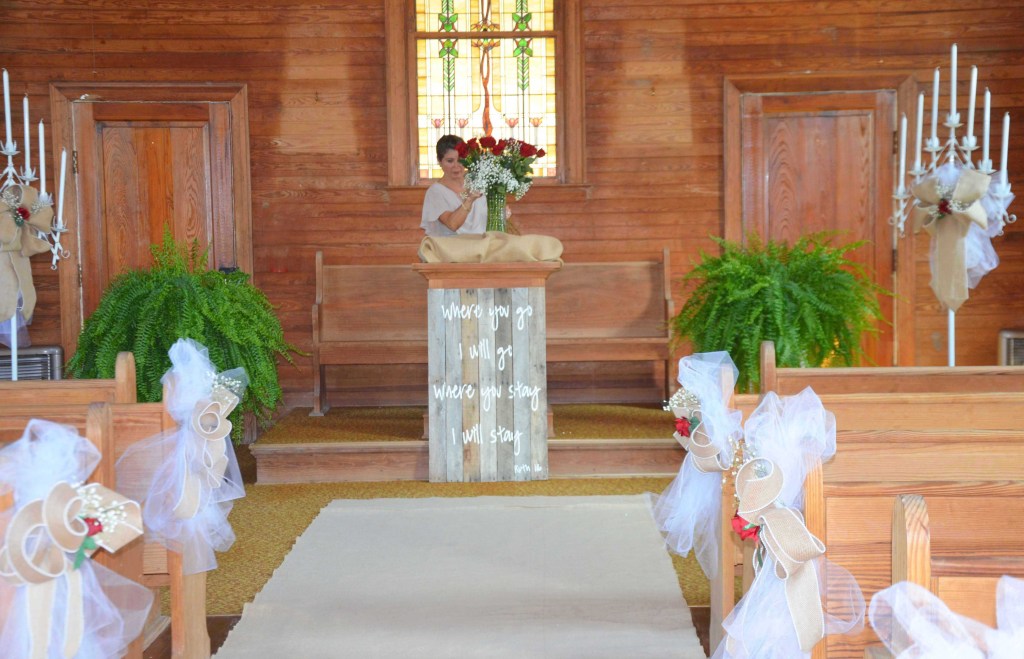 Messenger photo/Jaine Treadwell A decorator prepares Pisgah Primitive Baptist Church Saturday ahead of a wedding held in the historic building.

When a dart is thrown at a map of Pike and surrounding counties, chances are that it’s going to land within a stone’s throw of a church. In this part of the rural South, there’s a church on most every block and around every bend.

So it was on Saturday. The dart came down in close proximity of a church.

Just up the road from Briar Hill and right around Grady, there’s a church that could be a tourist attraction and maybe would be if it were not a best-kept secret.

W.F. “Sonny” Mills was the committee chair of Pisgah Primitive Baptist Church for several years and knows much about the history of the church and the solid rock wall that surrounds it.

“Pisgah Primitive Baptist Church was constituted in 1842,” Mills said. “The first church building was made from logs. The present church was built in 1931. For many years, the church had a large number of members, but now the church only has special services.”

The ribbons and bows on the porch railings and the posting of the words from the Song of Solomon: “I have found the one whom my soul loves”, were indications that a wedding was soon to take place in the historic church. Inside, the decorator was putting roses and baby’s breath in a vase. “So simple and yet so lovely.”

Outside, the wind was tossing the ferns around the porch and the azaleas in the cemetery were bending with the wind. But, the wind could only whistle around the gravestones.

The gravestones mark the final resting places of veterans of the country’s old wars: The War of 1812, the Civil War and the World Wars I and II. They tell the stories of war heroes, of husbands and wives, of mothers and fathers. They tell the stories of a young brother and sister, only two years apart, who died on the same day and of “two little boys budded on earth but bloomed in heaven.”

There are graves with no names and burial places that have been erased by time.

The graves were decorated by family and friends with rocks, clamshells and conches and by time with algae, lichen and fungi.

The shells are meant as symbols of a safe journey to that unknown shore. Rocks placed on a gravestone are visible reminders that a loved one is remembered.

However, the massive rock wall that surrounds Pisgah Primitive Baptist Church has no symbolic meaning and is only testimony to the hard work and commitment of the farmers who labored to build it, Mills said.

“Back in those days, after the farmers got their crops in the ground, there was about six weeks when the crops were laid by and there was not a lot of work to be done,” Mills said. “The story is that the farmers took that time to take their mules and wagons to the upper hills of Pike County and gather rocks to build the wall around the church. Just how they loaded all those heavy rocks on the wagons and how the mules pulled the wagons on that sandy land has made for conversation as long as I can remember.”

Mills said, at one time, undertakers were removing sections of the rock wall in order to get cement vaults into the cemetery.

“They were tearing down sections of the wall and not putting it back,” he said. “So, the church committee made the decision that no one can remove the rocks. We have to protect our cemetery and preserve our history.”