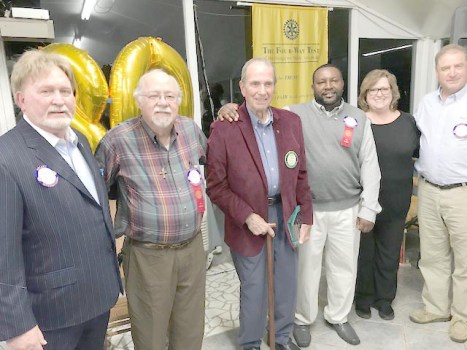 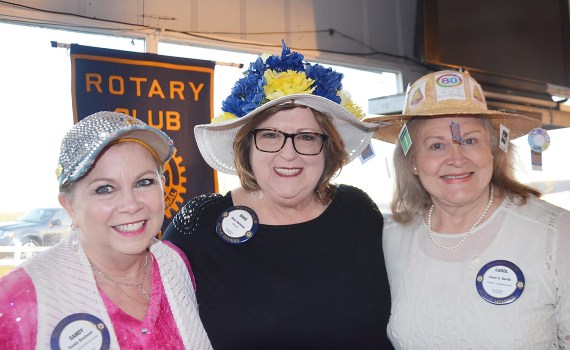 Club President Dixie Shehane said the Brundidge Club remains a viable part of the Brundidge community and is setting its course for its 100th anniversary of service.

The Brundidge Rotary Club had its beginnings in a meeting between R.H. Caper of the Troy Rotary Club and O.K. Ramage and other Brundidge businessmen who were interested in forming a club in town.

“On March 7, 1938, the Brundidge Rotary Club received its charter under the sponsorship of the Troy Rotary Club that was founded in 1920,” Shehane said.

Rotarian Chip Wallace, who is the club’s historian, said the club was chartered with 27 members and with O.K. Ramage as its first president.

Wallace said the club has had 77 different presidents with six serving more than one term. Two men, Ralph Dickert and Don Dickert, have served three terms as president. Fifth-eight people have been recognized by the Brundidge Rotarians as Paul Harris Fellows. Two Rotarians from the Brundidge club, Merlin Bryant and Ralph Dickert, served as District Governor of Rotary International District 688.

One of the club’s outstanding achievements is a record of 102 consecutive meetings with perfect attendance.

Wallace highlighted the club’s projects that were in response to needs of the community.

“The club’s projects include the direction of the local annual Pike County United Appeal campaign, sponsorship of Brundidge’s Boy Scout Troop 34, delivery of Thanksgiving plates to needy citizens, ringing the bell for the Salvation Army, sponsorships of handicapped persons to attend Camp ASSCA and the presentation of scholarships to local high school seniors.”

Wallace said the Brundidge Rotarians have provided more than $100,000 in scholarship funds to high school seniors within at 30-mile radius of Brundidge.

“Needless to say, the Brundidge Rotary Club has a proud and rich tradition of service to our community,” Wallace said. “But, we are still striving to improve our service to all avenues by placing ‘Service Above Self.’ It is our commitment that this heritage continues for many years to come.”

In closing the 80th anniversary celebration of the Brundidge Rotary Club, two new members were inducted into the club. Freddie Turner and Jerry Markeith Blakely were welcomed as Brundidge Rotarian and pledged their service to club and the community.

Longtime Brundidge Rotarian Lamar Steed was honored as the club’s Rotarian of the Year 2018. Steed has been dedicated to “Service Above Self” for 45 years and counting. For 33 of those years, Steed had perfect attendance.

“The club has never had, and probably never will have, a more dedicated member and a more committed community servant than Lamar,” Shehane said. “It is truly our Man of the Year and of the years.”