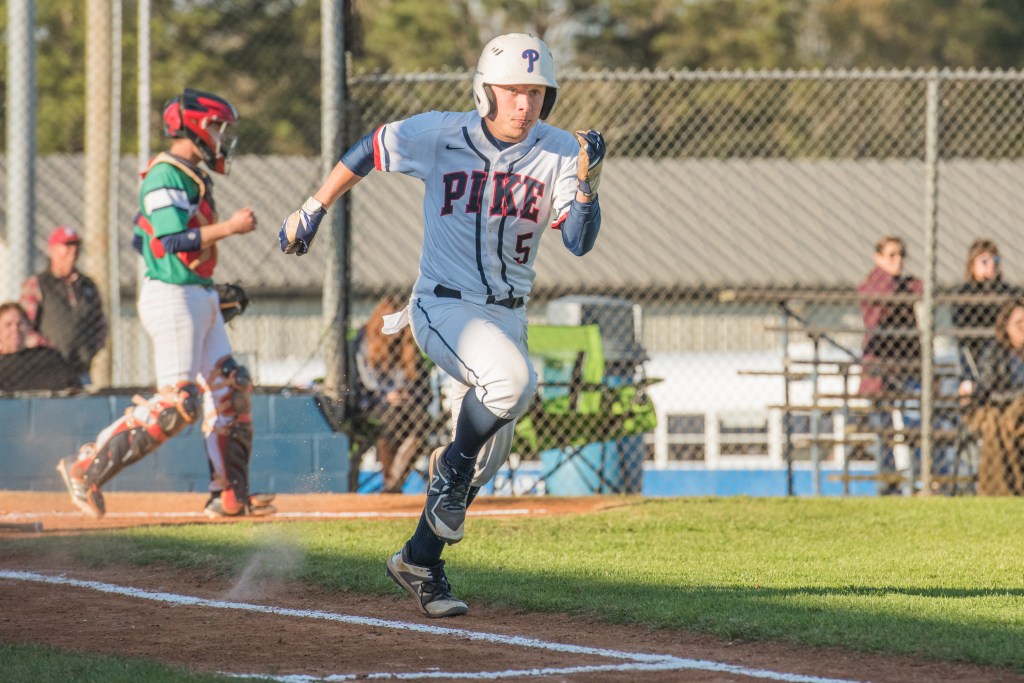 The Pike Liberal Arts School Patriots capped off a home doubleheader against league opponent Northside Thursday, winning 13-7 and completing the sweep after winning the first game 3-2 over the Knights.
The Patriots were able to fend off a late rally to improve their league record to 4-0 and overall record to 20-3.
After grinding out a win in a low-scoring first game, the two teams combined for 20 runs off of 22 hits in game two.
Patriots starting pitcher Wood Jinright pitched five innings and was tabbed with six earned runs, four of them coming in the fourth inning.
PLAS struck first in the bottom of the second when Jade Sikes’ hit a sacrifice fly, scoring Jinright. During the next at-bat, Cole McWhorter was able to steal home from third after Knights catcher Braydon Peters’ made an errant throw while attempting catch a baserunner at second.
Northside outfielder Jake Kinney led off the third inning with a solo home run to make the score 2-1 before a double play later ended the inning.
In the bottom of the inning, Davis Allen gave the Patriots their third run after reaching on an error and then scoring on another error.
Both teams went down in order in the fourth inning while Kinney added his second run of the game in the top of the fifth to make the score 3-2.
PLAS began the bottom half with four consecutive hits with Jinright driving in the first two runs of the inning with a double.
A sac fly brought in Jinright after a McWhorter single, who was later driven in by a Max Copeland single.
Trevor Barron, who reached on an error, scored on another errant throw by Peters.

His score was immediately followed by a double from Cody Hollis, scoring Copelad and giving the Patriots a 9-2 lead after five innings.
The Knights quickly responded by sending 11 batters to the plate to begin the sixth. Austin Thrasher led off and reached on an error while Northside’s starting pitcher Jacob Sauls was walked. Hunter Summerlin then drove in Thrasher and pinch runner Jacob Andrews with a double, cutting the Patriot lead to 9-4. An RBI single on the next at-bat led to the game’s first pitching change as McWhorter took the mound. Two more runs got across in the inning, causing the Patriots’ lead to dwindle to 9-7.
Looking to add some insurance in the bottom of the ninth, PLAS was able to do that and then some by
plating four runs on four hits. Reed Jinright blasted a leadoff solo homerun to open the inning. His brother, Wood, then hit a double and later scored on an error. Barron and Sikes represented the final two runs of the game for the Patriots as they headed into the final inning up 13-7.
McWhorter finished the game by striking out three of four batters.
Wood Jinright finished the game hitting 4-4 with every hit being a double. He had two RBI’s, three runs and 15 total bases.
“I was very proud of the way we came out in the bottom of the sixth,” PLAS head coach Allen Ponder said after the game. “For us to rebound was big for us because we able to take the momentum back on our side.”

After a one-game trip to Lakeside School on Friday, the Patriots will host Bessemer Academy in a three
game series this weekend.