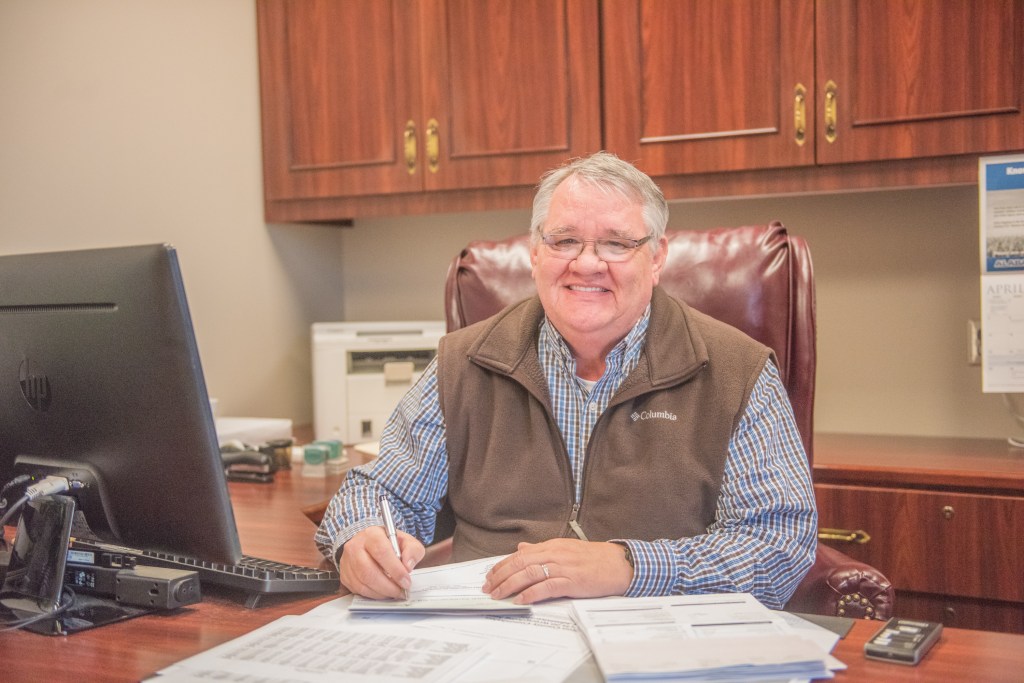 Harry Sanders is stepping down from his role as county administrator after serving in the position for the last 16 years, spanning multiple commissions. As administrator, Sanders worked with each commissioner and all county personnel and was responsible for handling the day-to-day operations of the county. Above, Sanders works at his office desk at the Pike County Health Department Wednesday with just one day left before he retires to spend time with family.

Despite his coworkers’ begging for him to stick around a bit longer, Harry Sanders will be leaving his role as county administrator after he wraps up his daily duties today.

“If it had been possible for us to stop his retirement, or decrease his age and increase the number of years left to continue with what he knows how to do best — creating a peaceful workplace for the superiors and subordinates to work together in harmony — we would have done that for him,” said Debra Gibson, chief financial officer for the county.”

Sanders joined the county as administrator back in 2002 after spending approximately 20 years in the private sector with Sony in Dothan.

When he announced his plan to retire in February, District 5 Commissioner Charlie Harris – one of the commissioners that hired Sanders – said that Sanders could retire, but that the commission would still lean on his experience and understanding.

“Another county administrator thought he was going to retire too and then he kept getting called by commissioners for help,” Harris said. “We’re going to still be asking you for help sometimes too.”

Gibson said there’s a reason that the county employees are so sad to see Sanders leave.

“Harry spent 16 years guiding and inspiring everyone in the workplace; it seems like it was yesterday we started to work under him. Mr. Sanders has given us so many opportunities to be thankful for. I see myself and my colleagues as lucky to have worked under his leadership. For that, I cannot thank him enough — the sweet memories of ever working with him will remain in my heart forever.”

McKenzie Wilson, personnel and safety director, said Sanders had an impact on the county that some people might not understand.

“There’s so much I can say about him,” Wilsons said. “He’s been a fabulous mentor to me. He has taught me a tremendous amount about how to treat people and how to work for the commission and people of Pike County. he will be greatly missed by the people in this office … There’s so much he has done with that job that people don’t even realize.”

Russell Oliver, county engineer, said Sanders is a tremendous man and a great friend. “He is a very good person and has meant a tremendous amount to me over the years as I’ve tried to do my job,” Oliver said. “He’s done a lot in the public eye and much more behind the scenes that people don’t even realize that has been a tremendous benefit to Pike County and its citizens.”

Sanders said he has accomplished what he set out to do in the office and made lasting relationships.

“I think we’ve done a decent job to improve the county’s position both financially and as far as the general attitude in the community,” Sanders said. “It’s kind of a bittersweet time; I’ve been planning on coming to retirement for quite a while – my wife and I have many things we’re looking forward to doing – but it means the separation of day-to-day relationships with people I’ve come to know and love over the last 16 years. There are a lot of good people in public office that are underappreciated that deserve a lot more credit than they get, but they aren’t looking for that credit anyway. Those people I will miss very much.”

Sanders said he is ready to begin a new season in his life and spend more time with family.

“It’s just time for a seasonal change, time to move on to the next part of my life,” Sanders said. “We’ll do that hopefully with as much joy as we have had over last 16 years. What made it that way is all the people I had the privilege and honor of working with.”

Although county personnel are sad to see Sanders leave, Gibson said they are happy for him to get to enjoy retirement.

“Of course, we all know how painful it is to say goodbye to a very friendly boss and a father,” Gibson said. “He has worked diligently; now it is time to enjoy all that he has labored for all over the years and live life happily without any stress. As he joins the ‘seniors’ of this great country, I pray that God continues to grant him sound health, mercy and blessings. And may he find life after retirement a happy moment with endless sweet memories.”