CLASS IN THE FOREST: Students learn about nature in the woods 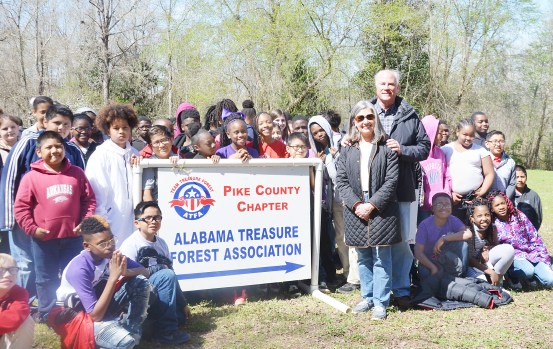 Fifth-grade students from Pike County, Goshen and Banks spent Tuesday at Classroom in the Forest on the Renfroe Family Farm in rural Pike County. 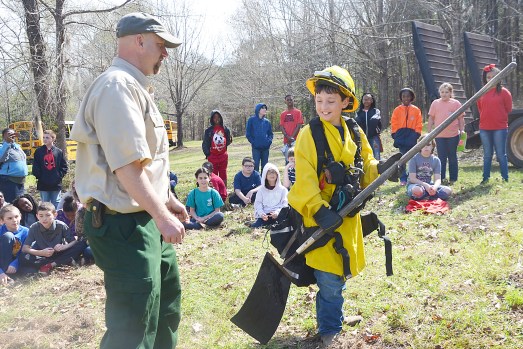 Logan Linton wants to be a firefighter when he grows up. He had the opportunity to suit up in a fireman’s gear at Classroom in the Forest on Tuesday. The gear was heavy and hot but Logan said he is up for the job. Jeremy Lowery of the Alabama Forestry Commission explained that a firefighter’s equipment and clothing are designed for safety. 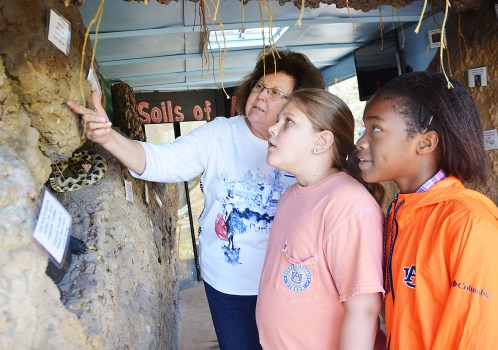 Alyssa Sparks, right, and Marilee Hughes, Goshen fifth-graders, were given a tour of the Soil Trailer by Deborah Huggins-Davis, Pike County Treasure Forest president. The students were amazed that so many creatures live underground. They had no idea they might be walking over turtles, snakes, lizards and “ugh, worms!” 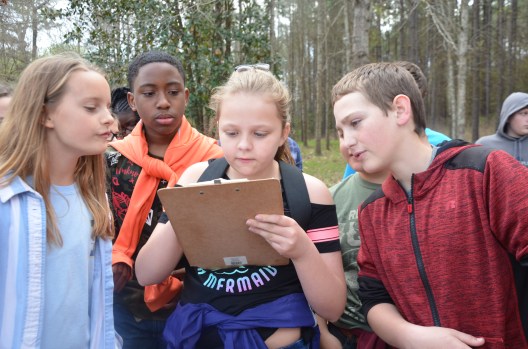 “Anything can and will be used against you,” he told the group of Pike County Elementary School fifth-graders. Then, a smile crossed his face as he added, “…on a test. So, listen and remember.”

Wildlife Conservationists Tharp and Bryan Rice were presenters at the 2018 Classroom in the Forest held at the Gene and Jana Renfroe family farm Tuesday with fifth-grade students from Pike County, Goshen and Banks schools participating.  Fifth-graders from Troy City and Pike Liberal Arts schools will be in the outdoor classroom today.

“Classroom in the Forest is an annual event that provides an outdoor classroom experience for all fifth-grade students in the county,” said Randy Hale, chair of the Pike County Farm-City Committee, a sponsoring organization. “It’s an opportunity for the students to participate in hands-on learning experiences in pond management, wildlife and prescribed burning, a scavenger and a visit to the soil trailer.”

Hale said in today’s world, some children don’t have many opportunities to experience nature. Classroom in the Forest provides them with a unique outdoor learning experience.

Emily Rolling, Pike County Extension coordinator, said the scavenger hunt was a new Classroom in the Forest activity this year and one the 134 fifth-graders really enjoyed on Tuesday.

“They were looking at things they would normally have walked on by and they were discovering things about the forest they never knew or perhaps never thought about,” she said.

The students were divided into group and competed to see which group could find the largest number of different things in the forest.

MacKenzie Gregory and her Banks School group found 11things in Mother Nature that the other groups didn’t find. And, perhaps, Braydon Arnett had the most unique find.

“It’s a jawbone from a small animal, maybe a squirrel or a rat,” he said. “I was looking hard for things and saw something white. I went and picked it up and it was a bone.”

Braydon said had he not been “in the hunt” he probably would not have even noticed the bone. “I’ll notice more things now.”

Greater awareness of the outdoors is what sponsors hope will be a benefit of Classroom in the Forest.

Gene and Jana Renfroe welcomed the fifth-graders to the Renfroe Farm, which he said has been in the Renfroe family for five generations.

The property was purchased around 1880 when the railroad came through the Pike County area.

“Back then, this was a farm with tenant houses,” Renfroe said. “Each tenant farmed and sold his products to the farm owner for money for things he and his family needed.”

Today, row crops are not a part of the farm. Roads have been added and, each year, the owners initiate a project to enhance the property, but always with the goal of keeping the property as natural and environmentally friendly as possible.

On behalf the host organization, the Alabama TREASURE Forest Association, Deborah Huggins-Davis, president, expressed appreciation to the Renfroes for their support of Classroom in the Forest and their generosity in allowing the use of their farm.

Classroom in the Forest was hosted by the ATFA with support from the Natural Resources Conservation Service, Alabama Forestry Commission, 4-H, Alabama Extension and Pike County Farm-City.