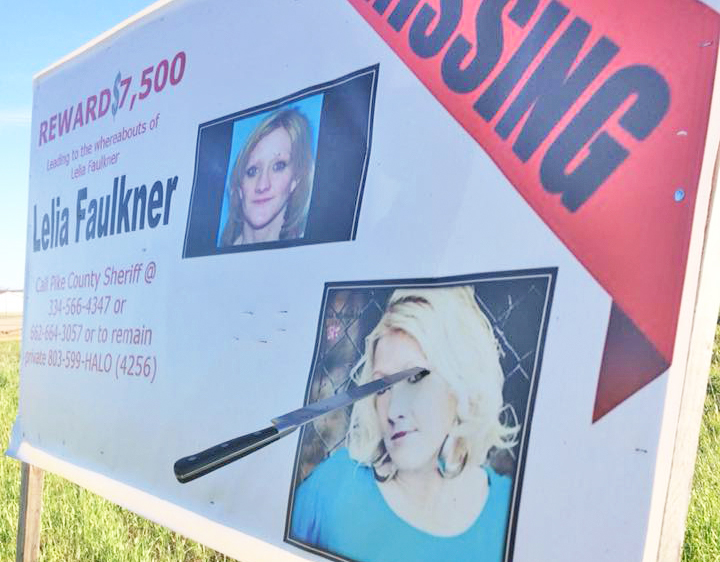 A knife sticks in a sign on U.S. Highway 231 Monday, March 12 that shows missing woman Lelia Faulkner. Faulkner’s parents came across the scene Monday and reported it to authorities. The sign was stabbed multiple times according to Susan Faulkner, Lelia’s mother.

As Susan and Ricky Faulkner drove past the sign seeking help finding their missing daughter, Lelia, they noticed what appeared to be a long shadow across her face. Looking closer, they realized it was not a shadow, but a knife thrust through the sign right above their daughter’s left eye.

“Whoever did this had stabbed the sign seven or eight different times,” Susan Faulkner said. “One of the knives broke off in the billboard itself and another was lying under the sign.”

Lelia Faulkner went missing July 4, 2016, after arguing with her parents and walking out of her Pike County home. Since then, there has seemingly been no trace of her: no use of her EBT card, phone or social media accounts.

The family has offered a $10,000 reward for information that leads to finding Lelia, dead or alive, and they’ve created four billboards around the county asking for help. The efforts have been futile.

“We’ve had people come and tell us they got information, but when they tell us what they’ve got, it’s virtually the same stuff that we’ve already heard. A lot of these people just want reward money and we can’t give that out until we find her,” Susan Faulkner said.

The family discovered the damage to the sign, located on U.S. Highway 231 across from the Pike County Cattlemen’s Association Monday, March 14, and notified the Pike County Sheriff’s Department.

Sheriff Russell Thomas said the department has a suspect in the stabbing of the sign but no charges have been filed. “It’s still under investigation,” he said.

Susan Faulkner said the incident is just another painful circumstance of her daughter’s disappearance.

“We felt threatened because it was like they were trying to tell us to stop what we’re doing because we’ve been posting a lot and talking to a lot of people and asking questions,” Faulkner said. “They can get mad all they want; we just want to bring our daughter home. I just want answers.”

In addition to her parents, Lelia leaves behind a 9-year-old daughter, Madison. Susan Faulkner said it’s hard for Madison to understand why her mom is gone and that the family needs answers.

“We just really need closure,” Faulkner said. “We know she is not going to just walk out and not contact us or not talk to us or anything. She’s never done anything like that and she would not leave her little girl without telling anybody.”

Anyone with information about Lelia’s possible whereabouts can contact the Pike County Sheriff’s Office at 334-566-4347.