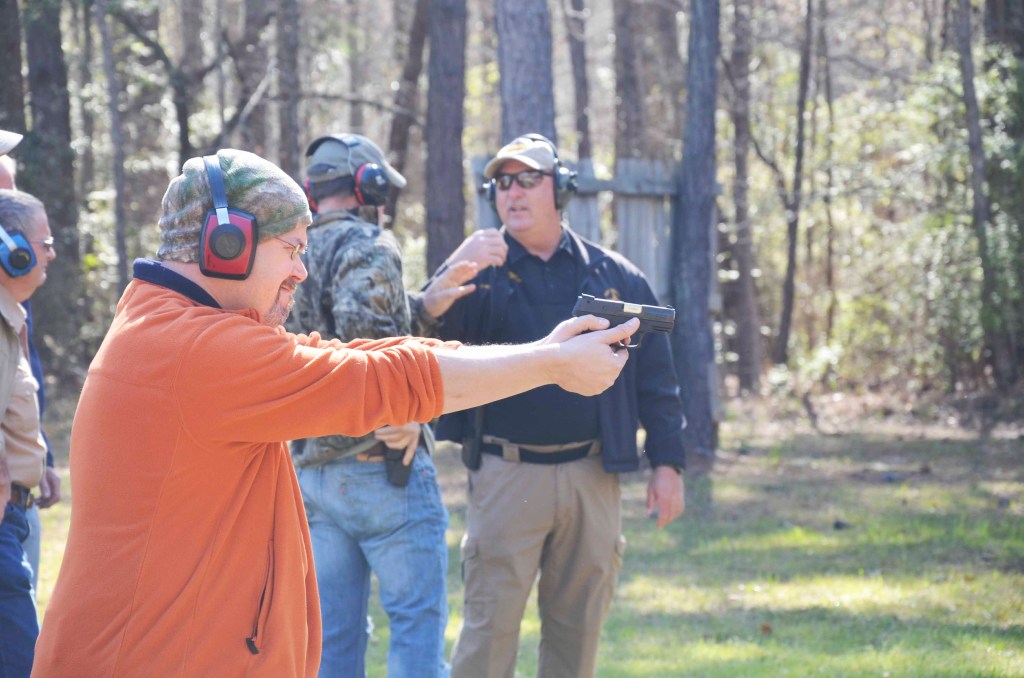 A few members of Salem Baptist Church of Brundidge were at the Pike County Sheriff’s Department shooting range early Friday morning into the afternoon working with deputies on how to handle their weapons, practicing their aim and getting tips about how to secure the church in the event of an active shooter. Above: Pastor Chad Mannion eyes his shot on a target at the range Friday.

Pastor Chad Mannion fired multiple rounds Friday as Sgt. Kevin Childs of the Pike county Sheriff’s Department observed. The bullets made contact with Mannion’s target, a sheet of paper in this case.

Mannion and several other members of Salem Baptist Church of Brundidge were preparing though in the case they ever have to shoot an assailant that enters their church doors.

“It’s a sad day when you have to worry about being armed in church, but those are the times we live in, with shootings that we’ve seen all over the country that have gotten to be more common,” said Sheriff Russell Thomas.

Most recently, a school shooting in Parkland, Florida left 17 students dead, but Mannion said the concept of a security team for his congregation has been in the works since an earlier tragedy. “The shooting at Sutherland Springs really got the ball rolling,” Mannion said.

In that incident on Nov. 5, 2017, a gunman entered the rural Texas church armed with a rifle and killed 26 people.

Mannion said his role as pastor includes physically protecting his flock. “My concern is not always just spiritual protection but also physical protection from harm that might come,” he said. “It’s something in this day and time that you have to be aware of any time you’re gathered in a public place.”

So Mannion and his group of about eight volunteers gathered a the Pike County Sheriff’s shooting range Friday morning bright and early to get in some target practice along with plenty of instruction from deputies about how to handle their guns and ways they can protect others in an active shooter situation.

“We went through a course of training that is basically the same as we do with the women’s handgun course, and actually went a step further with these men because they’re actually going to serve as security team,” said Sgt. Kevin Childs. “They’re going to stand as a kind of a shield and they wanted to come out and get some familiarity with their guns. We allowed them to shoot as much as they wanted to and showed them some techniques that we use in everyday practice: how you determine what is actually a threat, carrying a gun or drawing a gun.”

Mark Azant, who is heading up the team, said the training will be invaluable as the church continues to transition towards having the security team in place.

“It was an amazing training session,” Azant said. “These officers that trained us are very highly qualified and know what they’re doing. It was a very positive experience. As a security team it will help us 100 percent.”

Azant said there is a tough balance, however, between taking proper care of the congregation and continuing the church’s mission of reaching out to non-believers.

“The first thing you’ve got to know is, as a church, we’re there to help win souls for Christ,” Azant said. “You’ve got to be very aware of what you’re doing and why you’re doing it. But if a threat arises, you have to meet that threat and eliminate it at once.”

On top of those concerns, the church will also have to handle liability concerns and train the rest of the congregation on how to react if the situation arises.

“It’s a full church effort in reality,” Azant said. “The church has to know how to act if something does happen like that. We’re still in the process of putting proper scenarios in place for what will be best for our church. Every church will be a little bit different.”

Salem Baptist Church is not alone in wanting to increase security in Pike County. Some churches have already implemented security forces and others are still working on options similar to the route SBC is taking.

For churches wanting to arm their own members, Thomas said the Sheriff’s Office is there to help.

“We’re glad to be able to provide this service to this particular church,” Thomas said. “We want to do our part as members of the law enforcement community to partner with any local church that wants to do this.”

For churches interested in setting up a training day for church members, call the Pike County Sheriff’s Department at 334-566-4347.