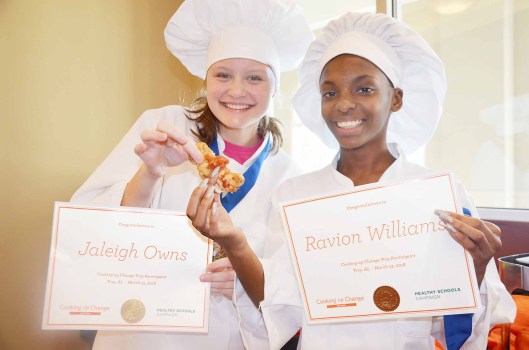 Jaleigh Owens and Rayvion Williams hold up their certificates after winning the Cooking up Change competition at Trojan Arena Tuesday. They will travel to Washington D.C. in June to compete nationally. 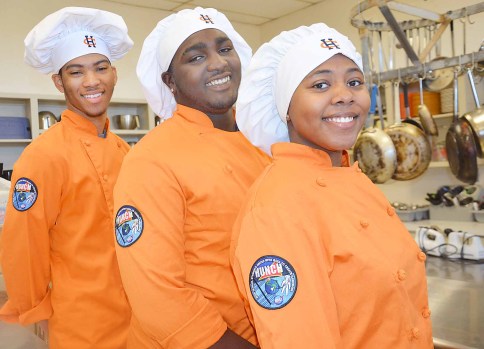 Ashley Ensley, Aaron Kelly and Rhezgeine Dobbins are headed to Houston in April in a competition to create the best space food for NASA.

Jaleigh Owens and Rayvion Williams danced a jig when their names were announced as the winners of the Cooking Up Change competition at the Trojan Center Arena on Tuesday. Not only were they were the winners of the Charles Henderson High School Culinary Arts competition, they had just punched their tickets to the Cooking up Change National Finals in Washington D.C. in June.

Seven student teams competed locally. Ashely Ensley, Aaron Kelly and Rhezgeine Dobbins were among the competitors and, for them, winning would have been icing on the cake. They already have tickets to the HUNCH Culinary Challenge in Houston, Texas in April.

Having two culinary arts teams from CHHS to compete in national culinary competitions is quite an accomplishment, said Paula Shute culinary instructor.

“My whole goal for our culinary students is for them to be exposed to the opportunities that will be available to them,” Shute said. “Culinary arts is an open area with many opportunities. In Houston, the teams that compete will get to see the lab where the astronauts’ food is tested. In Washington D.C. the Cooking up Change finalists will actually cook their meals on the floor of the U.S. Senate. This experience could peak their interests in politics. Culinary arts is much more than baking cookies.”

The HUNCH (High School Students United with NASA to Create Hardware) team of Ashely, Aaron and Rhezgeine will be the first to compete in the national culinary arena. However, it will be nothing new for Ashely.

“My team went to Houston last year but the other members graduated,” Ashely said. “It was a real experience and I’m looking forward to it. Maybe I won’t be so nervous this time.”

Each HUNCH team has to make a presentation about their meal. Why they chose the foods, how they are prepared the meal and why it will be a better tasting meal for the astronauts.

“I had to make the presentation last year and I was nervous,” Ashely said. “This time, Rhezgeine is going to do the talking. She’s a girl and she is better at talking.”

Rhezgeine said she will have no problem talking about their meal and its nutritional value for the astronauts.

Rhezgeine stopped short of saying there’s a secret ingredient in their “launch” but her smile said there just might be.

Aaron said the ingredients are placed in a skillet and blended to a consistency where they could be packaged.

“Astronauts can’t have food that could crumble,” he said. “Crumbs could fly around the cabin and cause problems for them and with the equipment. Their food has to be almost sticky so it will hold together.”

The food the HUNCH team entered in the NASA competition has been tested and approved by Johnson Labs in Troy.

“Even if we don’t win, our recipe will be included in an astronauts’ cookbook,” Ashely said. “That will be exciting.”

Jaleigh Owens and Rayvion Williams, the CHHS Culinary Divas Team, will have to wait until summer vacation to compete in the Cooking up Change Nationals. They admitted that they are excited and anxious to participate with their Tuscan Chicken and trimmings recipes.

“Our Tuscan chicken is really good,” Jaleigh said. “Everybody at our school challenge really liked it. We are excited about going to Washington to compete.”

The CHHS sophomores said they were surprised to win because it was their first time to compete but they thought their Tuscan chicken had a chance.

“At our school competition, we had to cook 140 chicken tenders and, when people started coming back for another piece, I started to think we might win,” Rayvion said.

Neither Diva Team member gave the exact ingredients for the sauté for their finger lickin’ tenders. But, in the nation’s capitol, there will be no secrets.

“We’ll have to prepare our meal in front of the judges and make a presentation. We’ll probably be nervous at first,” Jaleigh said. “But we’ve cooked a lot of chicken tenders so we should be okay.”

In addition to the rather spicy chicken tenders, Jaleigh and Rayvion will prepare broccoli and cheese mashed potatoes, which they said adds even more nutritional value to the potatoes.

“Our dessert is apple crisp which is healthy and good,” Rayvion said.

The meal is as balanced as it is good with spicy meat, vegetables with a hint of protein and a healthy fruit-based dessert.

With the Cooking up Change nationals still months away, Jaleigh and Rayvion will probably prepare their prize-winning Tuscan chicken meal another time or two to make sure they are ready for Washington.

Shute said her culinary students are up for the challenges ahead in Texas and in the nation’s capitol.

“Our dishes are hard to beat,” she said. “I think our teams will give the other competitors a run for their money.”