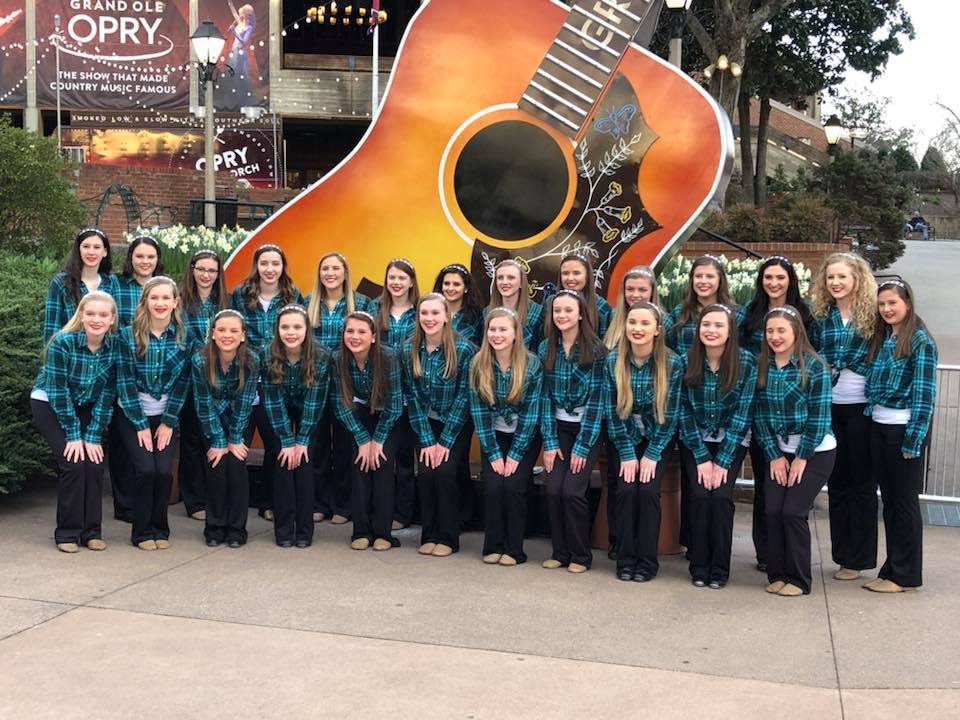 subMItted photo Cloggers with Troy’s Shebang pose for a group photo at the Grand Ole Opry in Nashville. The cloggers performed as the pre-show entertainment outside the theatre and also got to see the show, and some even got to be involved. The team also toured other parts of Nashville and became the first cloggers in history to be recorded at RCA Records.

For all the people to pass through RCA Records in Nashville – from Elvis Presley to Dolly Parton to Taylor Swift – only the Troy Shebang cloggers can say they were the first to ever be recorded clogging at the studio.

A total of about 60 students, parents and leaders took the trip to Nashville last Thursday and, by all accounts, it was a highlight experience for all.

“We all grew closer together,” said Anna May, a senior clogger at Shebang. “From seventh to 12th grade, you wouldn’t be able to tell it if you just saw us all loving on each other like we have been friends forever. We don’t always get to spend a lot of time with these girls with the different age groups.”

The cloggers noted a variety of memorable moments from the trip, with one of the best being the first ever group to be recorded clogging at the famous RCA Records studio, to the Tennessee favorite “Rocky Top.”

The girls were also recorded singing a Shania Twain song, although the girls weren’t as confident about how that went.

Another highlight of the trip was the group’s performance in front of the Grand Ole Opry, touring the facility and watching the show.

May even got called on to participate.

“I had to name eight things that start with the letter ‘S’ that could be found at a Dollar General,” May said. “I did it too and got a $20 gift card. My first answer was spaghetti sauce.”

One of the¬ great things about clogging at the Opry, the girls said, was the enthusiasm of the crowd.

“It drew a big crowd and a lot of people were videoing and clapping,” May said. “It was good because I feel like people in Troy go numb to clogging.”

“One woman told us that she enjoyed seeing us clog because she clogged too,” said Abbi Kay Terry. “It was cool to see that other people do it too.”

The girls were in Nashville from Thursday night to Sunday and also got line-dancing lessons at the Wild Horse Saloon, toured the Country Music Hall of Fame and got photos with the famous angel wings in the Gulch.