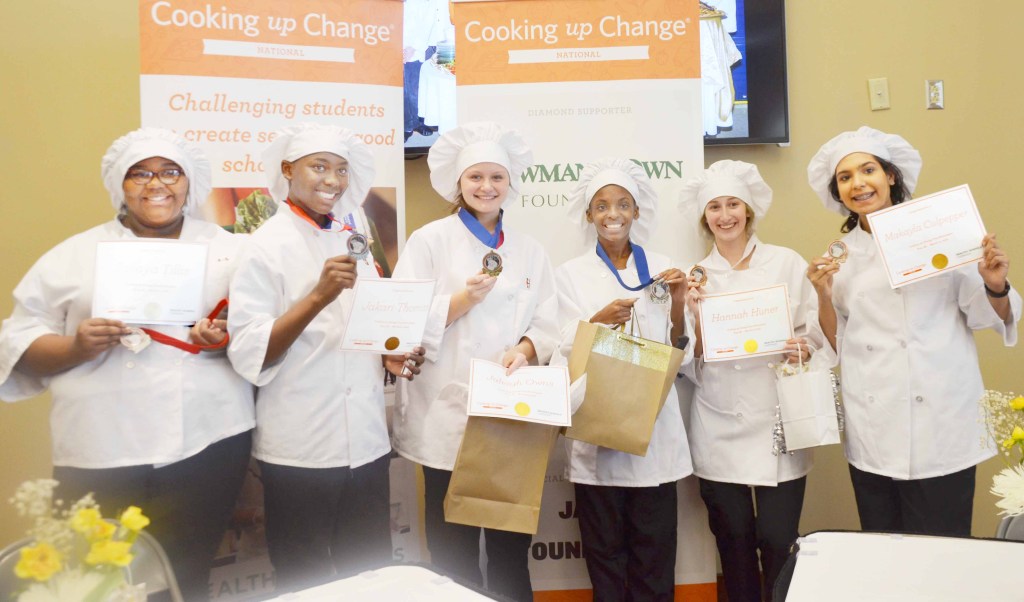 Troy City Schools culinary students competed Tuesday for the first time in Cooking up Change, a culinary competition that gives students an opportunity to have a voice in the national dialogue about school food.  The competition was held at Trojan Arena.

Team All Fired Up, Jakari Thomas and Tanaya Tillis, claimed second place with their chicken and cheese quesadillas with sides of mashed potatoes with peas and applesauce with dried cranberries.

The Spice Girls, Makayla Culpepper and Hannah Huner, were in third place with BBQ chicken, garlic Parmesan baked fries and peaches with yogurt.

“I appreciate all of the hard work you guys have put into this event,” Kelly said. “The dishes have been amazing and I’ve tasted them all. I’m proud of you and the accomplishments of the Culinary Arts Academy.”

Jaleigh and Rayvion, who competed as Team Culinary Divas, said they were surprised when their recipe was chosen. Even, though they thought their Tuscan chicken was delicious and even though the judges came back for “one more piece,” the Culinary Divas knew the competition was tough.

“All the teams had good food and everybody worked hard,” Jaleigh said. “I thought ours was good enough to win but it was up to the judges.”

Rayvion agreed all the food was good and well presented but she leaned toward “the Tuscan chicken.”

The Culinary Divas are looking forward to competing on the national level in the nation’s capitol, however, they are anxious to know how their Tuscan chicken will be received by the students in Troy City Schools.

Shute said before Jaleigh and Rayvion compete in the Cooking up Change National Finals, their recipe would first be served to the students in the Troy City Schools.

“That’s when we’ll really known if it’s good or not,” the young cooks said laughing.

“Cooking up Change serves up life-changing opportunities, helps students realize their own potential and gives students a voice in what meals are served in our schools,” Shute said. “Our students looked forward to taking on the challenge to create a delicious, nutritious school lunch that their peers will enjoy. I’m proud of all of them for taking on the Cooking Up Change challenge. They have done a commendable job of planning and carrying out their meals. All of them are to be congratulated.”