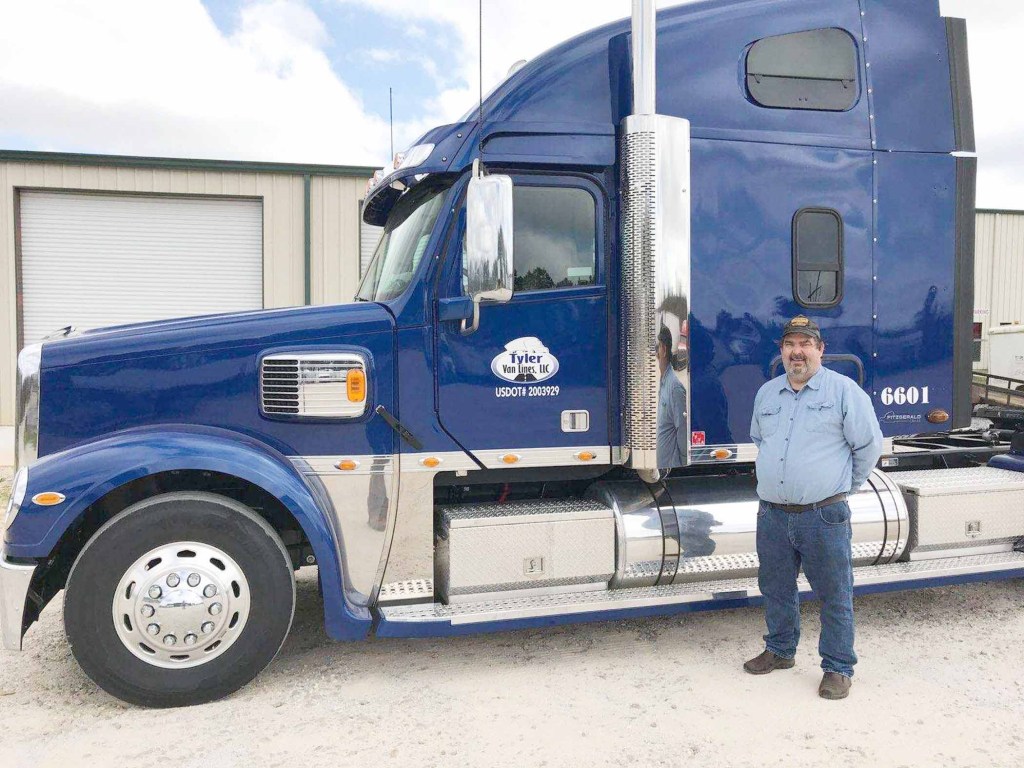 Bill Wood of Troy is Tyler Transport’s Driver of the Year. For that recognition, Wood received a $1,000 bonus, a plaque and the truck of his choice from the company’s new 2018 Freightliners.

Bill Wood has been named Driver of the Year for Tyler Transport in Troy and was given the choice of the truck to drive during his yearlong reign. Wood didn’t have to think twice to decide which truck he wanted – the brand new big blue 2018 Freightliner.

In addition to having first choice of which truck to drive, Wood also received a $1,000 cash bonus and a recognition plaque.

Lee Hussey, Tyler Transport owner, said Wood was the obvious choice for the Driver of the Year Award.

“Bill met all the criteria in our Driver Excellence Program,” Hussey said. “He won three out of four quarterly contests during 2017 and he sets a fantastic example for anyone in the profession.”

Hussey said Wood is always there when called on and he performs every task with a positive attitude and excellent performance.

“Bill is always there for us so we want to be there for him,” Hussey said.

For Wood, driving for Tyler Transport is the perfect job for him. He has opportunities to haul dry freight throughout the Southeast and the Midwest and those are his favorite routes.

“Most of my routes are up in Indiana and I like that,” Wood said. “But I really don’t mind driving anywhere. I like being behind the wheel. I like the freedom of being on the road. I can sit back and listen to the radio – country, rock, classic – whatever’s on and enjoy the ride.”

Wood has driven loads to the West Coast and the Washington state. He’s driven through bustling cities and one-horse towns, through the plains, across deserts and over mountains.

“That’s when I have to start crunching,” he said. “I crunch ice, potato chips, sunflower seeds. Anything that you have to crunch will keep you awake.”

Wood said driving a truck for a living is not for everybody.

Wood expressed appreciation to Hussey for the opportunity to drive for Tyler Transport and thanked him for the confidence the company has in him and his ability to drive the big rigs.

“I couldn’t drive for a better boss or work for a better company,” Wood said. “I enjoy every day on the road and I am thankful for the opportunity.”