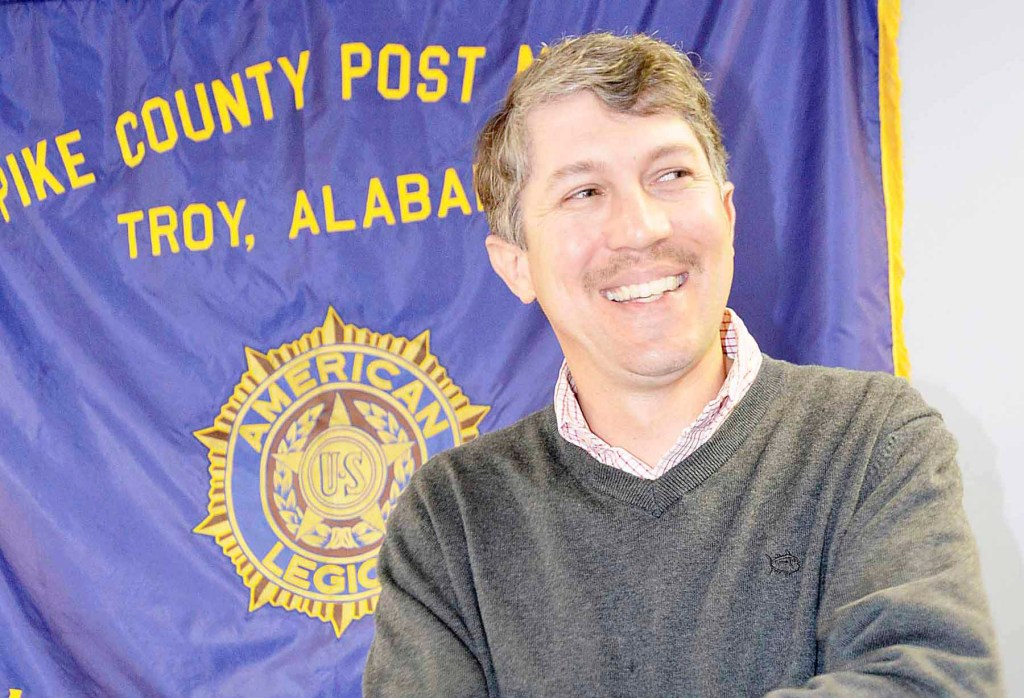 However, Johnson was introduced as a timber man and an outdoorsman who likes to rodeo, hunt deer and ducks.

But Johnson chose to talk about his experiences as a first-term Pike County Commissioner.

Johnson buys timber and has owned his own business for 10 years. It was his interest in the regulator aspect of business that attracted him to politics.

In his bid for the Pike County Commission, Johnson won the primary election and was unopposed in the general election. Not wanting to go into his first meeting as a county commissioner uninformed, he began early going to the commission’s meetings.

“The first thing I heard was ‘we’ve got to have a jail’ and, immediately, I thought, ‘what have I gotten myself into?’” Johnson said, laughing. “The commission had to tackle what nobody else wanted to.”

Johnson said the Pike County Jail is 63 years old and is the oldest in the state. Building a new jail would not be popular among county residents and that made the commission’s task even more difficult.

“Not many residents will end up in the county jail but all the residents ride the county roads,” Johnson said. “How could we build a jail if we couldn’t fix the roads. The thing is, the state mandates that we have a jail but the state does not mandate us to have good roads.”

In August 2017, the Pike County Commission approved a temporary sales tax that would bring in revenue to fund the construction of a new county jail.

“The sales tax would allow us to build a new jail but, with a $31 million backlog in infrastructure work, we would have to wait on the state for work on the county’s roads and bridges,” Johnson said.

With the jail tax in place, the commission began to look for changes that could be made and ways to restructure so the county could move ahead.

One way to save dollars was to stop collecting trash and turn the collection over to a private company. That resulted in a savings to the county.

Rather than mowing the county right of ways, the commission began using a herbicide to help keep the weeds down.

“Another way we saved was with the mass notification system which was one-third the cost of maintaining the 16 sirens used for severe weather warnings,” Johnson said. “We began to look at new budgeting for local road resurfacing and ways to restructure our debt.”

Johnson said he became more aware that having money in the coffer doesn’t mean that it can be used. There are restrictions on how certain funds can be spent.

But, through it all, Johnson said the “fear of the jail’ opened the door for change and the changes that have been made are moves in a positive direction.

Johnson talked briefly about Rex Lumber coming to Pike County with a guaranteed investment of more than $100 million in the local economy and at least 110 jobs with pay beginning around $16.25 an hour.

“The increase in timberland net worth could be tremendous,” he said.

For the Pike County Commission, the time for restructuring, re-negotiating and problem solving is now.