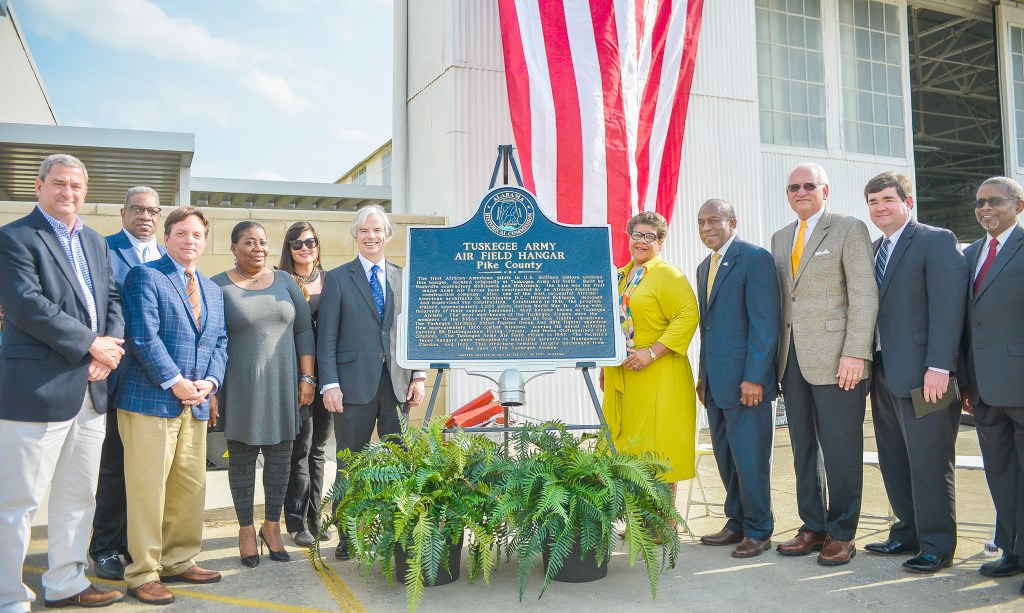 The marker honors the Tuskegee Airmen who were the first black military aviators in the United States Army Air Corps, a precursor of the U.S. Air Force.

“The distinguished performance of the Tuskegee Airmen paved the way for the integration of the U.S. Air Force,” Givhan said.

The Tuskegee Airmen were young African American men who aspired to become pilots but had to overcome many obstacles including racism. At that time, racial segregation remained the rule in the U.S. armed forces.

“These young airmen were proud individuals,” Crowell said. “They aspired to be aviators and they were determined to show they could fly. They seized the opportunity to excel.”

Crowell said the Tuskegee Airmen paved the way for the desegregation of the United States military “without thinking about it.”

“They put service before self and they accomplished their goals. They showed they could fly.”

Crowell said if the walls of the Tuskegee Army Airfield hanger could talk, what stories they could tell.

She closed with Gillespie Magee’s “High Flight” that surely captured, in its closing lines, the feeling of a dream fulfilled by those who proudly wore the title Tuskegee Airmen:

“I’ve topped the wind-swept heights with easy grace; Where never lark or even eagle flew: And, while with silent lifting mind I’ve trod; The high untrespassed sanctity of space; Put out my hand, and touched the face of God.”

Lamar Higgins, Troy University Trustee, closed the program with heavenly thanks for opening doors to new opportunities and for closed doors that cause us to look to heaven.