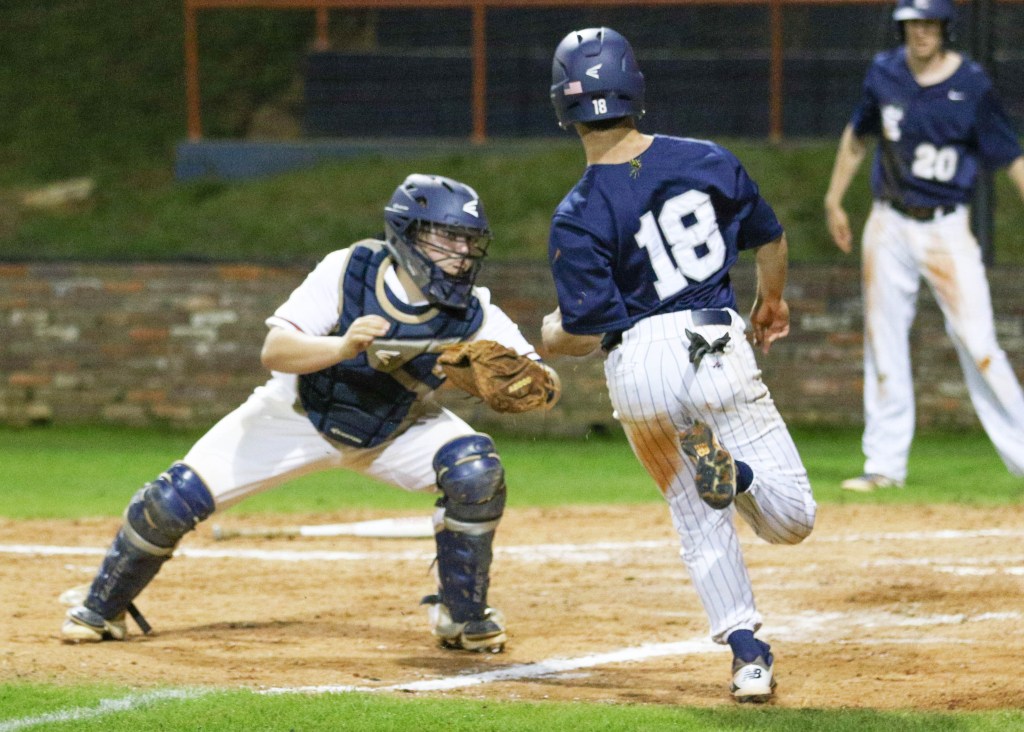 CHHS catcher Lawson Scarbrough applies the tag to Enterprise base runner Gabe Anderson at a play at the plate Tuesday night in Troy.

Charles Henderson High may have come up short on the scoreboard Tuesday night in a 10-6 battle with Enterprise at Hogan’s Hole, but from the overall play of the Trojans, and the enthusiasm in the dugout and on the field, it is clear CHHS is improving as a baseball club.

“The dugout had a better attitude, and it was a whole new team from what I saw,” said interim head coach Taylor Polk. “We competed a lot more, we competed at the plate, and we hit the ball a lot better than we have been. Just from what I saw, I think we are going to be okay.”

Class 7A Enterprise took a 1-0 lead and CHHS tied the score 1-1 in the bottom of the first when J.B. Sanders walked and scored on back to back doubles by Noah Lowery and Keonte Brantley.

Enterprise led 6-1 in the second, with Ryan Page hitting a solo home run to lead off the rally for the Wildcats.

CHHS cut the lead to 6-5 in the bottom of the third when Caden Bryan and Chance Pollard singled, Sanders was hit by a pitch, Lowery doubled in two runs, Anthony Gurba singled in a run and Lawson Scarbrough hit a deep sacrifice fly to drive in a run.

The Wildcats added two runs in the fourth and two more in the fifth innings to go ahead 10-5.

CHHS added a final run in the bottom of the sixth when Payne Griffin singled and later scored on a single by Pollard.

Pollard, Lowery and Brantley each had two hits for the Trojans, while Gurba, Will Reeves and Bryan had one hit each.

Lowery had two runs batted in for the Trojans while Pollard, Brantley, Gurba and Scarbrough drove in one run apiece.

Enterprise was led at the plate by Chance Warren with three hits, Joseph Thornton had two, while Robert Hutson, Ryan Page, Colin Marsh and Lane Levine had one each.

The Trojans are at home Thursday at 3:30 p.m. against Robert E. Lee, return home Friday for a 4:30 game with Holtville, and a 7 p.m. matchup that same day against Opelika at 7 p.m. Saturday CHHS will host Ft. Payne at 10 a.m. to close out the four-game weekend series.