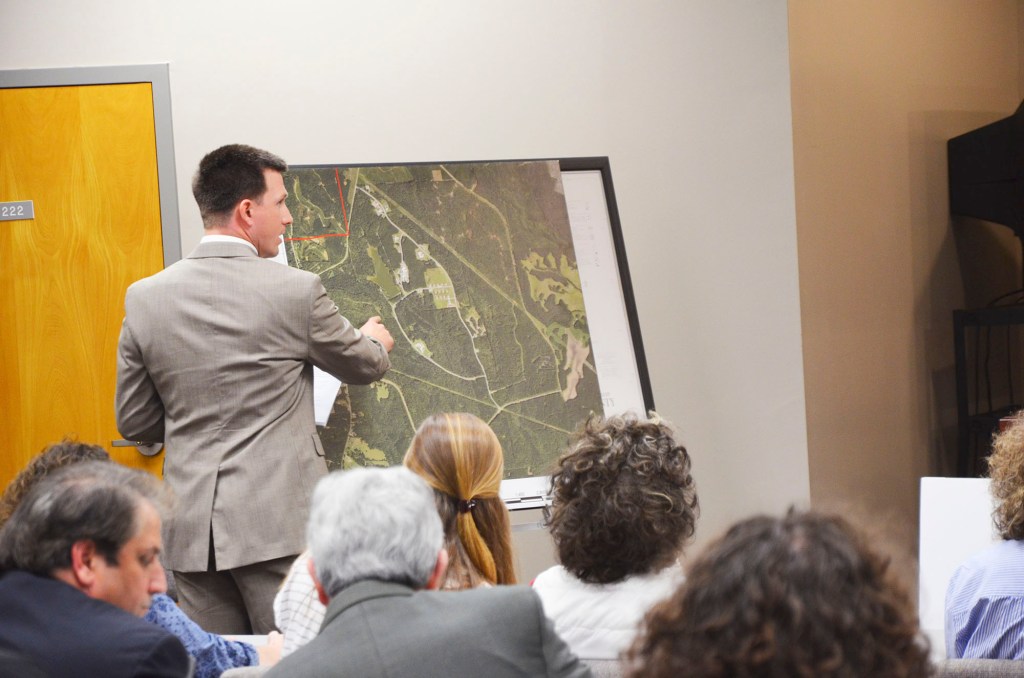 Lockheed Martin representative Adam Carson explains the lack of space left at the company’s site near County Road 7717 and why the company must absorb the road for future expansion opportunities.

Lockheed Martin can no longer expand on its current property according to company representatives at a commission meeting Monday night. That, they explained, is why the company is asking the county to transfer the ownership of a 2.7-mile stretch of county road to the business.

“Recent contract wins have resulted in unprecedented growth and significant construction projects,” said Adam Carson, Lockheed representative. “We have three new projects underway right now. We have 39 completed buildings across our site. But we have to abide by (a regulation) that says there has to be certain distance between facilities on our site. It keeps us from building anything within 1,250 feet of public roads, our property line and the transmission lines that run through our property. Other items that restrict our ability to build within our existing site are wetlands and the topography of other land. As we stand today, those three new projects were the only spots left to construct facilities on our site. Without this road, we will no longer be considered for future contract wins.”

The company first petitioned the commission for ownership of the road in September 2017 and the first public hearing on the road transfer was held in January. During those meetings, nearby residents have brought up concerns that the closing of the road could cause inconvenience to travel times, decrease property values, inhibit the Meeksville Fire Department, back up traffic and cause safety issues, among other concerns.

Carson addressed some of those concerns Monday night.

“Ms. (Darlene) Lee made numerous statements about the ability to see an employee gate from her property and employee traffic backing up,” Carson said. “There is no plan or intention to put an employee gate on that road and therefore traffic would not be backed up. The gate that would be on that road would be approximately 250 yards around a curve from her property … with the timber between the two properties and the gate around the curve it would be practically impossible to see. There’s also no evidence that vacating the road would cause any devaluation of property and any claims that it would are purely speculation.”

In previous meetings, Lockheed representatives had not quantified how many jobs owning the road might bring, but Carson projected Monday that a road transfer could allow for 150 to 200 new jobs.

“We compete internally for the production of home contract wins,” Carson said. Once a program is won, it has to be manufactured somewhere. We want to be the location of choice, but because we have won these contracts, we have filled up our space and can no longer be considered … As a resident of Pike County, I saw this opportunity and approached the company about this idea. I saw a chance to expand the community we love.”

Darlene Lee, whose family owns property near the area, presented a petition with 204 signatures to the commission requesting they deny the request.

“You’re considering closing a road for 150 jobs and then they’re tapped out,” Lee told the commission. “After that they can’t expand anymore … Everything they’re saying is hogwash.”

Richard Morris, a lawyer representing a nearby resident, asked representatives to reveal projects they had lost due to not having the road or whether they could promise 150 jobs if the road was absorbed. ”I don’t think you understand how this works,” Carson said. “I can’t promise exactly how many because I don’t have a crystal ball, but Lockheed Martin will continue to find a place to put these.”

Matt Baker, counsel for Lockheed, also informed commissioners that the road was originally paved by industrial access funds because of Lockheed’s location there and that the company actually donated 66 acres of land to the county at that time free of charge. He also updated commissioners that he had a proposal in place with Meeksville Fire Chief Lewis Davis and that he had agreements or letters of support from Pike County Water Authority and South Alabama Electric Cooperative.

Commissioners announced at the end of the meeting that a vote will be held March 26 on whether to give up the road to Lockheed.