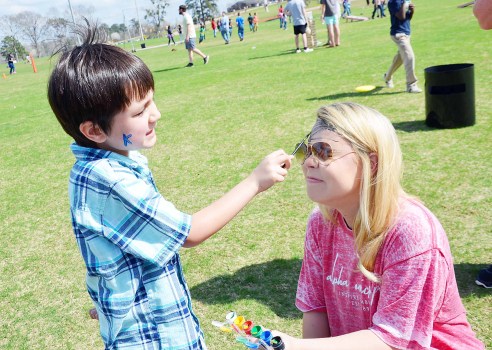 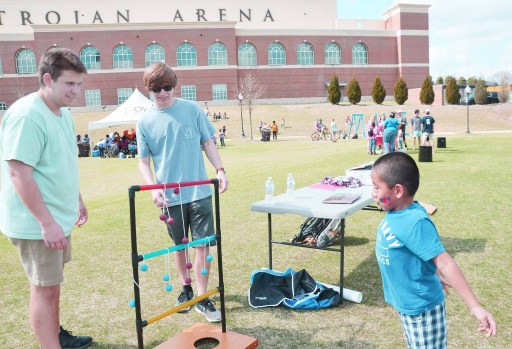 Vincent Elio, Pi Kappa Phi president, left, and Travis Ratliff, Carnival chair, look on as one of the visiting students with special needs plays a game at the fraternity’s carnival Thursday. 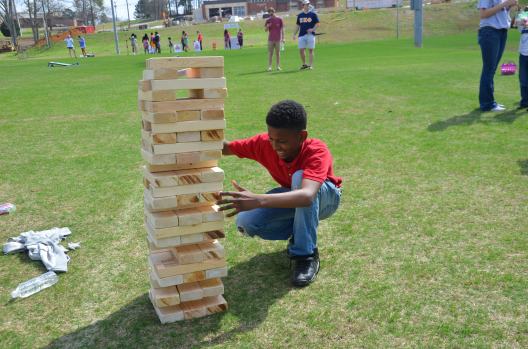 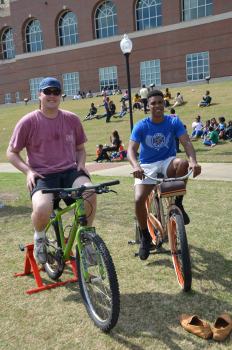 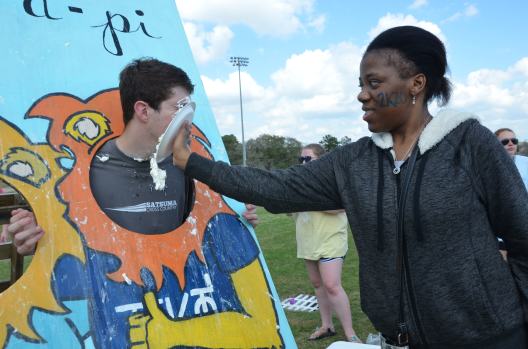 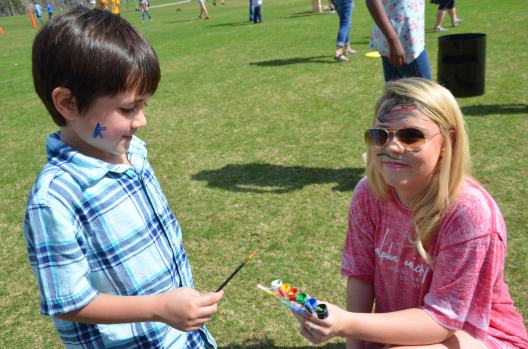 The brothers of the Pi Kappa Phi Fraternity at Troy University wanted to make a good thing better. And, if numbers and smiles count for anything, then the Pi’s made better, the best.

The Pi Kappa Phi hosted a Carnival for special needs students from Pike and surrounding counties Thursday at the Troy University Arena field area with more than 180 kids participating.

“The kids had a great time and we wanted more kids to be able to participate this year, so we opened the Carnival up to schools outside Pike County.

“We had more games this year because of more support of the Carnival,” Ratliff said. “We really appreciate the support of those organizations and of our volunteers.”

The games were designed after old-time carnival games, such as “Go, Fish” and “Ring the Bottle” but also included skill games, face painting and “Pie a Pi” which was “the most fun” because kids got to actually put a pie in the face of a member of the sponsoring fraternity.

But Vincent Elio, Pi Kappa Phi president, said it’s worth a pie in the face to see the smiles on the kids’ faces.

“This is something that we can do for these kids and something that is so rewarding,” he said. “Having a disability can be limiting physically and socially. Out here, nobody thinks about things like that. They just have a good time.”

“This is a great event because children forget about their shyness and their disabilities,” she said. “Out here, they are not different. They are just kids having fun. We enjoyed the carnival so much last year that we brought all six grades this year.”

The Pi Kappa Phi fraternity’s philanthropy is The Ability Experience, which is a nonprofit organization that supports people with disabilities.

At the Carnival the Greeks were riding stationary bikes for the “experience.”

“Together, we will ride 100 miles on each of he two bikes and we ride non-stop,” Ratliff said. “We want to experience what it’s like when it hurts to keep going or when we are so tired we want to stop. People with disabilities often have to keep going when things get that tough.”

The fraternity raises funds to build wheelchair ramps at homes around Troy. Their mission is to put smiles on the faces of kids with the annual Carnival and to lend support to people of all ages, when and where possible.