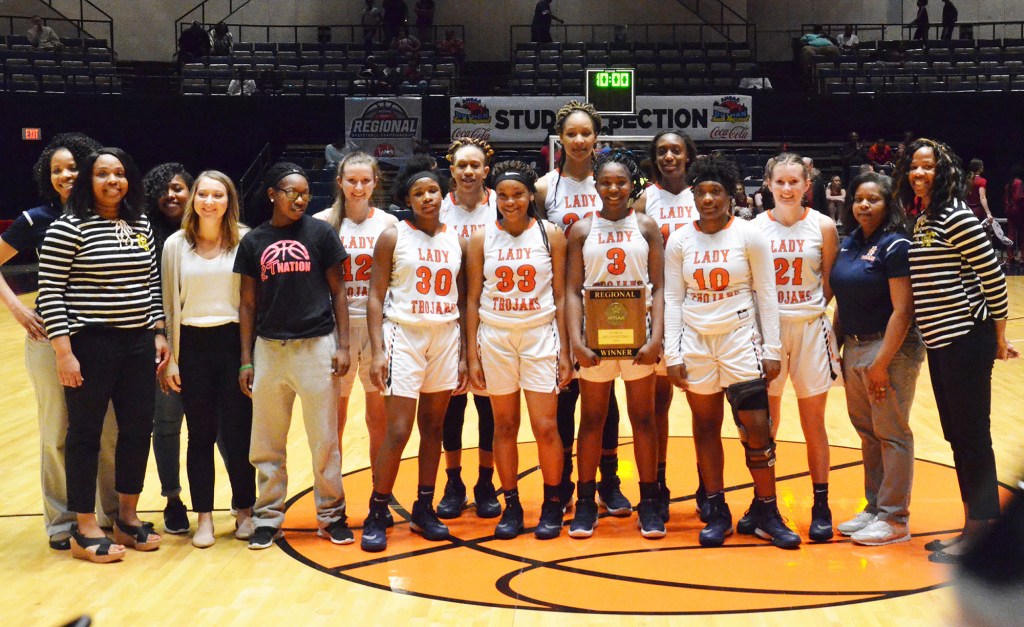 It wasn’t easy, but the Charles Henderson Lady Trojans advanced to Birmingham after knocking off Faith academy 36-22 on Wednesday afternoon in Dothan.

The Trojans shot just 20 percent in the win, but a strong defensive effort and a lofty free throw percentage helped the Trojans pull out the win.

“We started off slow,” said head coach Dyneshia Jones. “It was a low-scoring game. Offensive-wise, we didn’t hit anything. We weren’t rotating like we were supposed to be rotating. We pulled it out in the fourth quarter. We had a bad shooting percentage, but the free throws in the end ended up winning the game.”

The Trojans defense held the Rams to just 25 percent shooting.

“One thing I put emphasis on while watching film and practicing is, is what hand do they dribble with,” Jones said. “If they had a dominant hand, we tried to take that away from them. They did a good job at it.”

“I knew it was going to be a tough game,” said Niaira Jones. “We pulled it out with defense.”

It was a defensive struggle for much of the opening half on Wednesday afternoon. Neither team led by more than 6points in the opening 16 minutes of play.

The Rams led for much of the opening quarter by as many as 6 points before Tatyana Siler helped lead the Trojans to a 9-8 lead heading into the second quarter.

Ashanti Lipscomb nailed a 3-pointer as time expired in the second quarter, sending the game to halftime with the Trojans leading 16-13.

Despite the 2-point advantage, the Trojans shot just 15 percent compared to 27 percent by the Rams.

Siler led the way in scoring for the Trojans with 6 points.

The third quarter stayed relatively quiet. The Trojans led by as many as 5 points and after back-to-back baskets by Maori Davenport, the Trojans went into the final quarter holding a 22-19 lead.

The Trojans began the fourth on a 12-0 run to gain a comfortable lead, one they wouldn’t relinquish. Four of the points came from Samira Moore. Moore finished the tournament on the all-tournament team and had 6 points on Wednesday.

The Trojans outscored the Rams 14-3 in the final quarter to book their ticket to Birmingham for the third consecutive season.

“It’s big,” Jones said. “You see we are not throwing water or are excited because we have a goal. We have been there. We know what this feels like to make state. Now our goal is to win state. They are excited, but they are humbled and they know what they have to do to win.”

Davenport led the way for the Trojans with 10 points, while Tatyana Siler and Niaira Jones had 8.

The Trojans will take on Wenonah for the third consecutive year in Birmingham. The Trojans have dropped the previous two.

“The game is going to be tough, but I feel like we can win,” Davenport said.

Tipoff is scheduled for 3 p.m. on February 28 at the Legacy Arena in Birmingham.