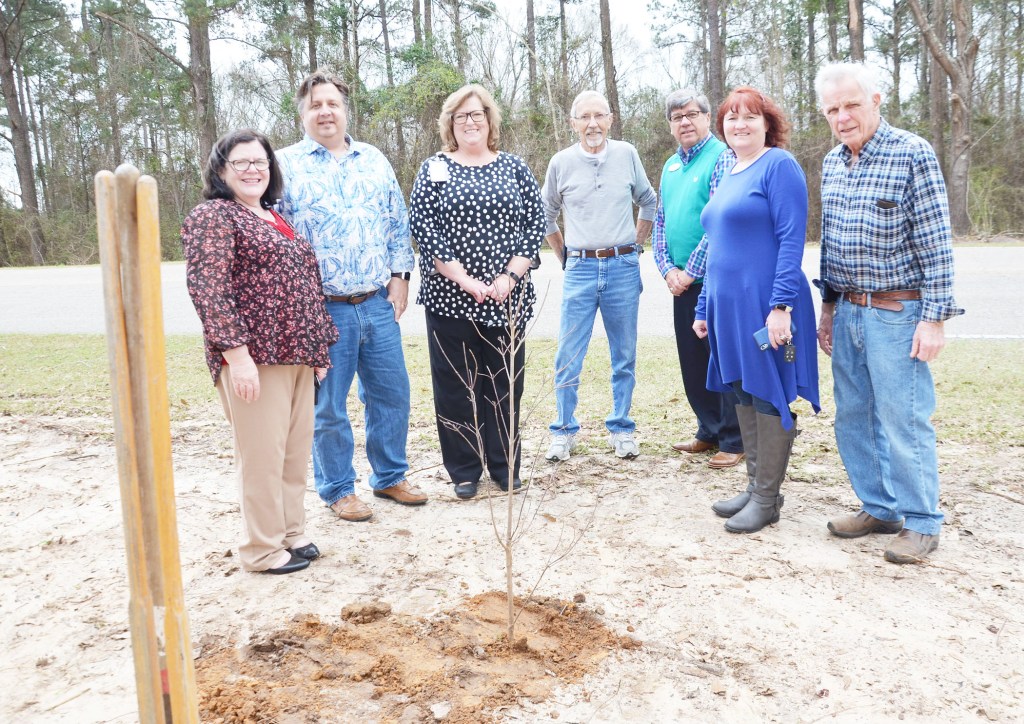 Members of the Brundidge Rotary Club were on hand for the planting of 16 dogwood trees along Veterans Blvd. Tuesday. The trees were planted in response to Rotary International President Ian Riseley’s challenge to all Rotarians worldwide to each plant a tree. Pictured, from left Buriece Gracey, Olaf Lieb, Dixie Shehane, Larry Shiver, Jimmy Ramage, Jennifer Garrett and Homer Homann.

Rotary International President Ian Riseley challenged all 1.2 million Rotarians to each plant one tree between the beginning of the Rotary year on July 1, 2017 and Earth Day 2018 on April 22.

In making the challenge to Rotarians worldwide, Riseley said environmental degradation and global climate change are serious threats to everyone. Trees remove carbon dioxide and other greenhouse gases from the air, which slows global warming.

Once the challenge was issued, the Brundidge Rotarians immediately gave their support to the Rotary Tree Planting Initiative. On Tuesday, with the assistance of the City of Brundidge, the Rotarians planted 16 dogwood trees along Veterans Boulevard. The dogwoods replaced the crepe myrtles that had become root bound, Shehane said.

Olaf Lieb was the first Rotarian to put a shove in the ground. Other Rotarians gave their encouragement to the planting of the dogwoods. They laughing agreed that each Rotarian should have his or her own tree and the responsibility of maintaining it.

“Sleep, creep and leap is the rate of growth,” she said. “That’s what I’ve been told.”

No matter the rate of growth for the dogwoods or the maples, the Rotarians said the planting of the trees will not only fulfill the club’s commitment to Riseley’s challenge, it will be visible recognition of the club’s responsibility to the people and to the earth as well.

The Rotarians expressed appreciation to the City of Brundidge for its support of the Rotary Tree Planting Initiative and especially Steve Roberts, Timmy Keel and Kendall Gilbert who provided much of the physical labor for the project.