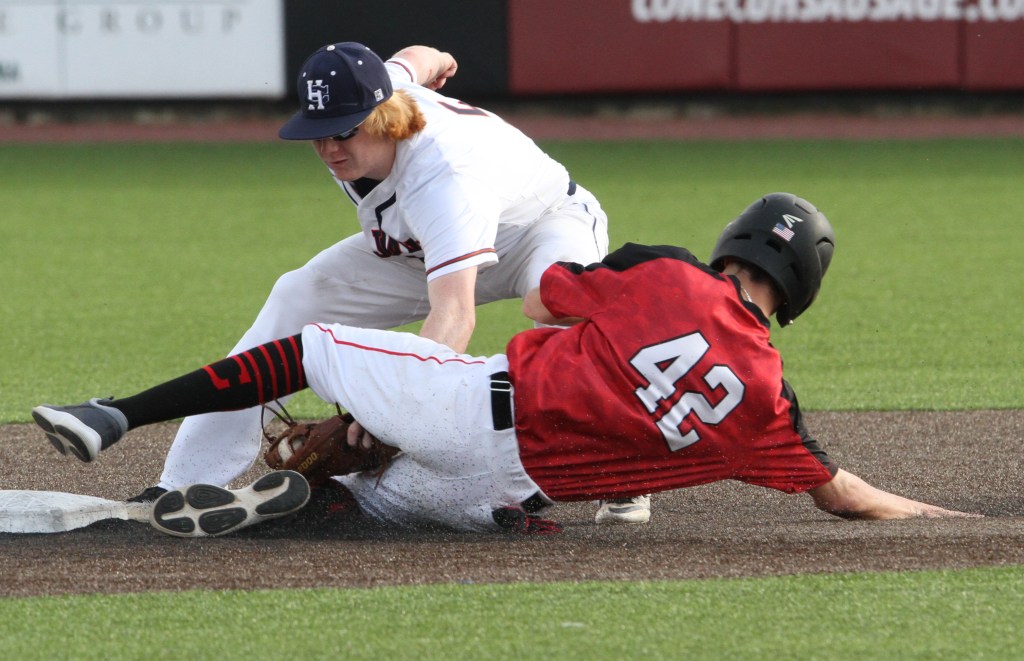 CHHS second baseman Jackson Giles applies the tag to get a Central of Phenix City base runner out Monday at Riddle Pace Field.

It did not help matters that the flu bug is making the rounds on the Charles Henderson High varsity baseball squad, and that three teammates were in Dothan on the basketball roster competing in the 5A regional tournament, but CHHS head coach Josey Shannon did not make any excuses following two Monday setbacks. G.W. Long and Central of Phenix City were as strong as any opening day opponents you could schedule, with CHHS falling 10-0 to G.W. Long and then 4-1 to Central to open the 2018 season at Troy University’s Riddle-Pace Field.

“Considering that we’ve been hit by the flu bug, and a few players on the basketball team in Dothan in the regional playoffs, not saying the outcome would have been any different, not making any excuses, but we were shorthanded today,” said CHHS Head Coach Josey Shannon. “We kind of platooned the best we could, and we saw some positives against some really good teams. That’s why we play a 35 game schedule, and we will continue to get better every day.”

Against G.W. Long starting pitcher Payne Griffin allowed only two runs on three hits over four innings, but the Rebels touched CHHS relievers for eight runs in the top of the fifth inning to go up 10-0.

J.B. Sanders had the lone hit for CHHS as Dylan Register of G.W. struck out eight and walked one.

In the second game against Central of Phenix City, the Red Devils scored two runs in the first, and two in the third, while CHHS tacked on a run in the bottom of the seventh for the 4-1 final.

Christopher Maxwell had a single in the seventh inning for the Trojans to break up a no-hit bid by Central pitching.

CHHS is in action again Thursday at Wicksburg and will return home Friday and Saturday to begin the Terry Sikes Tournament.