RUNNING MATES: Price passes love of running down to his children 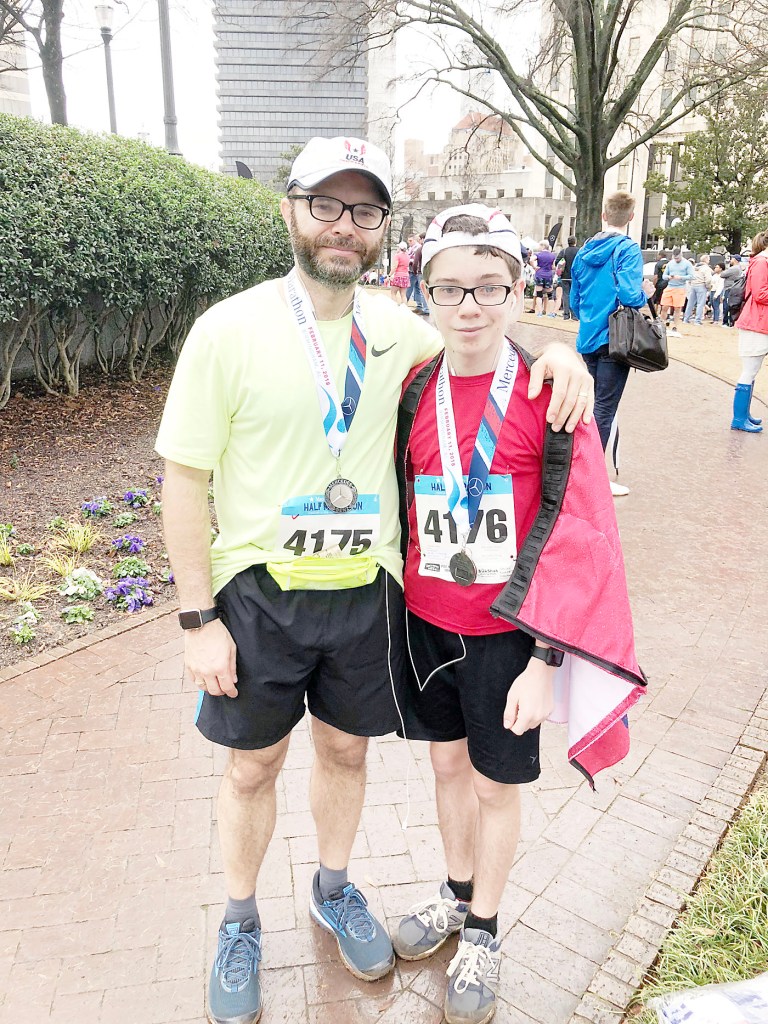 Greg Price of Troy and his son Will competed in the Mercedes Half Marathon in Birmingham Saturday. They finished the 13.1-mile run together. The half marathon was 14-year-old Will’s first of what he said will be many.

For Greg Price, it was a euphoric moment when the announcement came over the loud speaker Saturday that “Senior and Junior William Greg Price are about to cross the finish line.”

Greg Price Jr. was probably thinking about the Jim ’N Nick’s barbecue that awaited him. His dad, Greg Price Sr. was reveling in the coming of age moment for his son.

Fourteen-year-old William (Will) Greg Price had just completed his first Half Marathon and, along the way, had given his dad a run for his money.

“The Mercedes Half Marathon in Birmingham is a beast of a run,” Price said. “I had a heck of a time keeping up with Will. He kept turning around to see me. I think he felt sorry for me.”

Greg Price is a seasoned long distance runner. He has run marathons and charity runs, including local runs as far as 100 miles and he ran 200 miles in support of the Pike County Relay for Life fundraising campaign.

So, it seemed natural that his children would have an interest in and the stamina for distance running.

“I’m addicted to running and I’ve been running competitively for 36 years,” Price said. “When our kids were babies, I would put them in their strollers and jog pushing them.

I’m sure they had to wonder what I was doing – wonder about their daddy’s weird addiction.”

As Greg and Amy Price’s children grew older, they took an interest in what their daddy was doing and often joined him on his jogs. Price encouraged their interest in running and welcomed them along on his runs, which he tailored to the length of their little legs.

“When Will was four years old, he ran in the Troy Nutrition Center’s 5K Jingle Bell Jog with me,” Price said. “I thought he would run some and walk a lot but he ran the race. That was when I knew he had a keen interest in running.”

The three Price siblings have shown an interest in running and they are veterans of the Peanut Butter Festival 5-K Run in Brundidge, which their dad said presents an optical illusion.

“It’s challenging because you think the finish is flat but it’s really uphill and you’re not expecting that,” he said.

And, the unexpected is what makes long distance running so “addictive.” You just never know what a race will bring, Price said. And, the Mercedes Half Marathon has its own surprises. And, the possibility of things unknown gave Price some concern when he and Will were searching for what would be the 14-year-olds first half marathon, 13.1 miles.

“Will told me in December that he wanted to run a half marathon and I wanted to find a good introductory race for him,” Price said. “The Mercedes runs are always well organized but the course is a beast with a lot of hills and the weather is not always pleasant. There was the possibility that it would not be a good first-time experience.”

Greg Junior wanted to give it shot.

Right from the beginning, there was a hitch. It rained. Keeping their feet dry to prevent blisters was a major concern for the runners. The hills started to come up quickly and conquering them in wet gear was an added challenge.

“About half way through, I got a cramp and had to stop,” Will said with a hint of laughter. “Dad said I just stopped to eat Skittles. I was hungry.”

Will finished the race along with his dad who kept saying, “Slow down” and he finished eager to run again.

“I’ve been running since I was about four,” Will said. “I play tennis and that takes a lot of running so I didn’t really have to do a lot of training for the half-marathon. It was fun and it’s something I want to do again. My dad has run distances of 100 and 200 miles and that has inspired me. Running keeps you in shape and it’s fun. It’s something I want to keep doing.”

And, he’ll have the encouragement and support of his dad and will be an inspiration to his 12-year-old sister Emily, and five-year-old brother Ben.

And, if he is serious about being a long distance runner, his dad will pass on words of wisdom from his friend and mentor, the late Nick Costes.

“Nick told me that running is the loneliest sport in the world, that you battle yourself the entire time,” Price said. “I’ve found that to be true. Running is demanding but being outside and enjoying the environment is so rewarding. There’s nothing to compare to a runner’s high. There is no way to describe it. You have to experience it.”