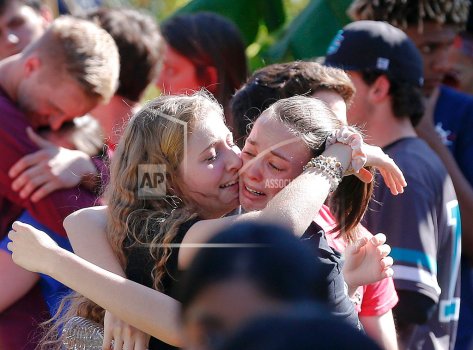 PARKLAND, Fla. (AP) — The Latest on the school shooting that killed 17 people in Florida (all times local):

The FBI says it failed to investigate a specific report in January that Nikolas Cruz could be plotting a school shooting.

The agency said Friday that the tip should’ve been investigated thoroughly because it was a potential threat to life. Cruz has been arrested and charged with killing 17 people at a high school earlier this week.

On Jan. 5, a tipster who was close to Cruz called the FBI and provided information about Cruz’s guns, desire to kill people, erratic behavior and disturbing social media posts. The FBI says the caller expressed concerns Cruz could attack a school.

The FBI was also notified about a comment on a YouTube video posted by a “Nikolas Cruz” last year. It investigated the comment but did not determine who made it.

At the first funeral for a victim of the Florida high school shooting, mourners packed the Star of David chapel to remember 14-year-old Alyssa Alhadeff.

Those outside Friday stood and strained to hear the voices chanting Jewish prayers and remembering the star soccer player as having “the strongest personality.” She was also remembered as a creative writer with a memorable smile.

Authorities say Nikolas Cruz, a volatile 19-year-old who had been expelled from Marjory Stoneman Douglas High School, opened fire there Wednesday, killing 17 people and wounding more than a dozen others. Cruz was ordered held without bond Thursday.

Sen. Bill Nelson says he’s continuing to work for changes in gun laws after 17 people were killed in a Florida high school.

The Florida Democrat says the state Legislature also bears responsibility, since it could outlaw assault weapons in the state.

Nelson says “these kids are just terrific. … The fact that they are speaking up as boldly as they are, maybe that’s the turning point. You haven’t heard students speak up one after another after another after witnessing such carnage and speaking out with such conviction.”

Former student Nikolas Cruz is being held without bond on 17 counts of premeditated murder.

Everytown for Gun Safety says it has received $800,000 in unsolicited donations since the shooting at Marjory Stoneman Douglas High School. It calls it a precursor for midterm elections in 2018, which it hopes will turn the tide in gun politics.

John Feinblatt, president of the Everytown group, says “it’s time to elect leaders who will finally act to save lives from gun violence.”

The five-point action plan includes pledging to vote according to candidates’ positions on gun safety, letting leaders know the money they’ve taken from the National Rifle Association will determine one’s vote, registering friends to vote, getting candidates to state their conditions on the record, and finally, running for office to become a champion for sensible gun laws.

Shannon Watts, who founded the group Moms Demand Action for Gun Sense in America, said “many of our lawmakers have failed us, but that’s why we have elections.”

A grieving mother who directed her anger at President Donald Trump on live television after the Florida school shooting isn’t done shouting. And she’s made it personal, invoking the president’s 11-year-old son, Barron.

Lori Alhadeff spoke Friday in a CNN interview before the funeral for her 14-year-old daughter Alyssa.

She said, “President Trump, Barron goes to school. Let’s protect Barron. And let’s also protect all these other kids.”

Then her voice raised to a shout as she said “You need to help us, now. We need security now for all these children. We need Action, Action, Action!”

President Donald Trump says he’s heading to Florida, where a community is in mourning after a shooting at a high school killed 17 people.

In a Friday morning tweet, Trump said “I will be leaving for Florida today to meet with some of the bravest people on earth — but people whose lives have been totally shattered.”

He also said he’ll be working with Congress “on many fronts.”

Authorities said Nikolas Cruz, a volatile 19-year-old who had been expelled from Marjory Stoneman Douglas High School, opened fire there Wednesday, killing 17 people and wounding more than a dozen others. Cruz was ordered held without bond Thursday.

Funeral services are being scheduled for victims of the shooting at Marjory Stoneman Douglas High School in Florida.

Meadow Pollack and Alyssa Alhadeff will be buried in the Garden of Aaron at Star of David Memorial Gardens in North Lauderdale after separate funerals on Friday.

Fourteen-year-old Alyssa was among the youngest victims of Wednesday’s shooting that killed 17 people. Her mother screamed on CNN, demanding that President Donald Trump take action.

Eighteen-year-old Meadow was a senior planning to attend Lynn University in Boca Raton.

Another funeral service is scheduled Sunday for 14-year-old Jaime Guttenberg.

Jimmy Kimmel opened his late night show by replaying clips from President Donald Trump’s statement about the killings of 17 people by a teenager with an AR-15 assault weapon at a Florida high school — including the part where Trump said “no parent should ever have to fear for their sons and daughters when they kiss them goodbye in the morning.”

Kimmel said he agrees, “and here’s what you do to fix that. Tell your buddies in Congress, tell Paul Ryan and Mitch McConnell and Marco Rubio, all the family men who care so much about their communities, that what we need are laws, real laws, that do everything possible to keep assault rifles out of the hands of people who are going to shoot our kids. Go on TV and tell them to do that!” he said to strong applause.

Kimmel called on Trump to “force these allegedly Christian men and women who stuff their pockets from the NRA to do something, now. Not later, now. And don’t you dare let them say it’s too soon to be talking about it.”

Kimmel urged people to write their representatives, call them, “and if they don’t listen, vote them out of office.”

At least 1,000 people attended a candlelight vigil near the school Thursday night, some openly sobbing as the victims’ names were read aloud. At one point, people began chanting, “No more guns! No more guns!”

Some held flowers. Others held signs asking for action, including gun control, against school violence.

Authorities said Nikolas Cruz, a volatile 19-year-old who became an orphan when his mother died in November and had been expelled from Marjory Stoneman Douglas High School, legally bought the AR-15 assault weapon he used to kill 17 people and wound more than a dozen others.

Cruz was ordered held without bond Thursday. His lawyer called him a “broken human being” and Executive Chief Public Defender Gordon Weeks said he was under a suicide watch.

No. 1 Alabama looking for 6th title under Saban vs. Ohio St