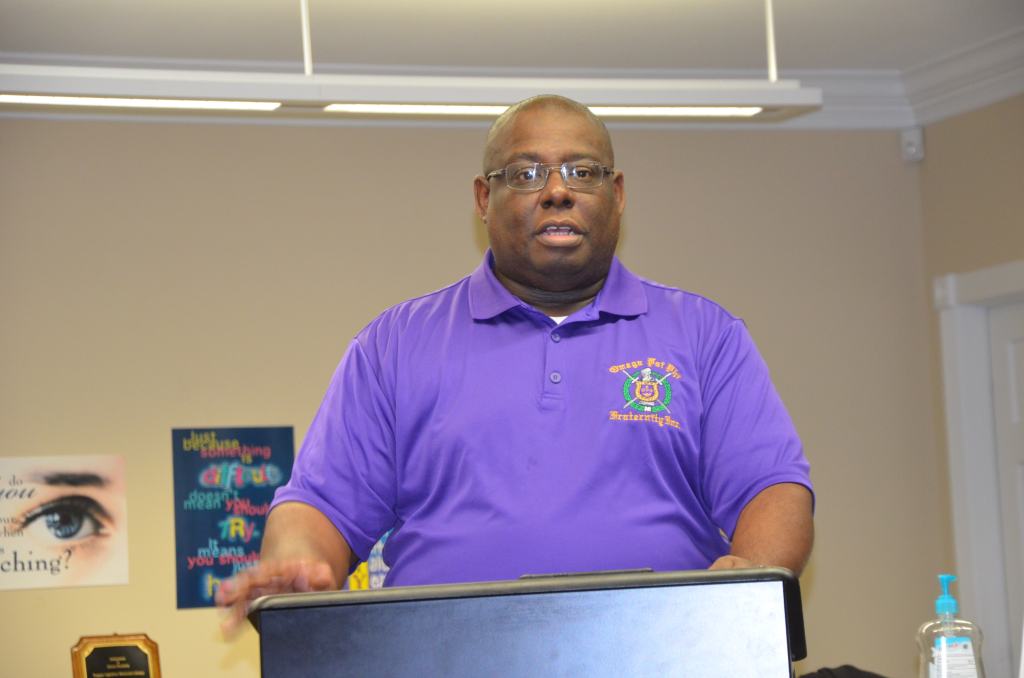 Carter Davenport, a former employee with the Alabama Department of Corrections, answers Brundidge residents' questions about the challenges the prison system faces.

A large gathering of Brundidge residents that had questions about Alabama prisons got answers from Carter Davenport, who is retired from the Alabama Department of Corrections.

The question and answer forum was presented as a Brown Bag event by the Tupper Lightfoot Memorial Library in Brundidge at noon on Wednesday.

Davenport began with the Alabama DOC as a correctional officer trainee in 1987. He served as warden at Holman Correctional Facility in Atmore, where he was stabbed during a riot in 2016.

Davenport has made the rounds in the state prison system and he admitted that he’s glad to be “out of prison.”

“The prisons are overcrowded and understaffed,” he said. “Right at this time, I would bet there are 20 or less correctional officers at Easterling. Come 6 p.m., there will be even fewer.”

Davenport said the overcrowding could be attributed, in part, to the large number of inmates that should be in a mental health facility rather than in prison.

“I am not speaking for the DOC,” he said. “But the lack of federally funded mental health facilities is the reason so many of those with mental illnesses wind up in prison.

Davenport said contraband is the number one problem in the state’s prisons.

“Contraband does get it,” he said. “It comes in baby diapers, pork chop sandwiches, body cavities. You would not believe how it comes in. Most prisons are next to highways or near wooded areas. Ninjas, dressed in black, come at night and throw contraband over the fence. I’ve chased Ninjas through the woods all night.”

Davenport said contraband gets into prisons in mailed packages and in supplies that are trucked in.

“To keep it out, every item that is bought in has to be checked and that’s labor intensive,” he said. “Even cans of beans that come to the kitchen have to be checked.”

Women’s prisons have to be managed differently from men’s and Davenport said he would rather work in a men’s prison than a women’s.

The Brundidge residents had questions about several topics from the burial of inmates to the pros and cons of a prison being located in their community.

Davenport said there has to be an autopsy of any inmate that dies in prison. When the DOC is left to bury an inmate, the state will make the coffin and the prison chaplain will perform the service. There are three state cemetery options for burial. The cost of an inmate’s funeral is about $2,100.

As for having a prison locate in Brundidge, Davenport said he doesn’t want a prison.

The only benefit to the community would be the income from the utilities.

“Those that work in the prison would probably come from outside the town,” he said. “Few people that live in a town where a prison is located, work there. And, contraband comes in and those that bringing it are cause for concern. A prison? It depends on what you want for your town.”