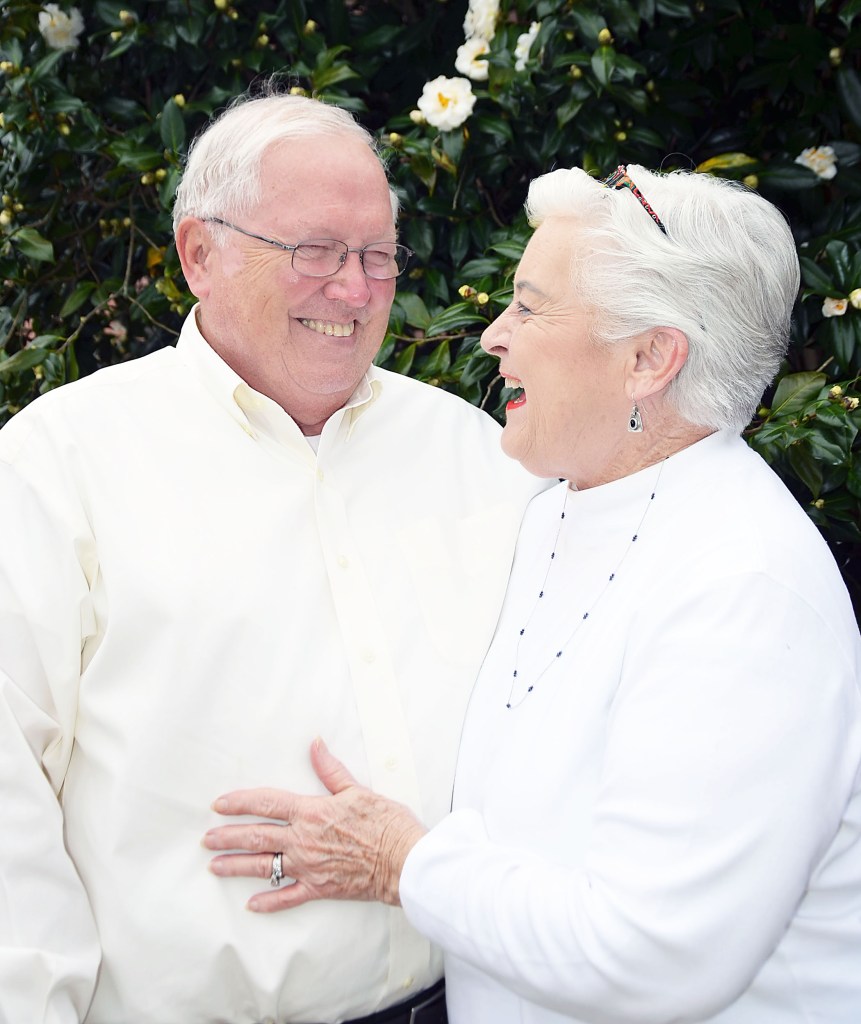 Joe and Evelyn Watson are celebrating 50 years of ownership of Byrd Drugs today. On Valentine’s Day 1968, they purchased the drug store that had been owned and operated by her dad, Marvin Byrd from 1940 until 1968. Joe Watson has been the pharmacist at Byrd Drugs for 50 years. It is the only job he has ever had.

Evelyn Watson makes no bones about it.

When she looked across the room at the boy with a big smile, it was love at first sight.

“It hit me like a ton of bricks,” Evelyn said, glancing across the room at her husband, Joe Watson. “And, it still does. I’ve got the shirt Joe was wearing that night at the Alpha Delta Pi party at Auburn University.

Evelyn’s Big Sister set up a date for her and the boy with the big smile. The date was to a party and then church and ended with a drive up to the lake.

“I told my roommate that if Joe had asked me to marry him that night, I would have said, ‘Yes! Yes!’” Evelyn said, casting a smile of her own across the room at her husband of 50-plus years.

Joe Watson was working at Winn-Dixie in Auburn, making 50 cents an hour while pursu-ing a career in the medical field. Evelyn was preparing to be a teacher.  Both were thinking of spending their lives together.

“We got ‘lavaliered,’ and I would go home to Troy with Evelyn and her dad, Marvin Byrd, put me to work in the drug store on the corner of the square,” Joe said. “I loved everything about the drug store and about Troy. I liked the people. It was a comfortable place to be. It was like being a home.”

“Daddy had four daughters and Joe became like a son to him,” Evelyn said. “They went fishing and hunting together and they enjoyed just sitting around talking.”

And, the more Joe learned about the drug store business, the more he realized that pharma-cy was the career for him.

“I don’t remember talking it over with Evelyn,” he said. “I just knew that was what I want-ed to do so I changed from pre-med to pharmacy. That’s a decision I have never regretted.”

The couple talked their parents into letting them get married two quarters before they gradu-ated from Auburn and they moved into an apartment near campus and began their lives as a married couple.

“We were as happy as we could be,” Evelyn said. “We enjoyed being at home together studying. We both made the Dean’s List.”

The Watsons graduated in the spring of 1967 and moved to Troy where he worked at Byrd Drugs and she accepted a teaching position at Fort Rucker.

On Labor Day of that year, Marvin Byrd had a heart attack. He had a second heart attack in January and died on February 11, 1968.

The couple gave little, if any, thought that their purchase of the family drug store occurred on Valentine’s Day. However, now 50 years later, they are celebrating a milestone event in their lives.

“Byrd Drugs is the only job I have ever had,” Joe Watson said. “It has been a terrific 50 years, for me and for us.”

“When we first bought the drug store, I bought gifts for the store,” she said. “In those early years, the drug store was the town’s Walmart. We sold almost everything and the store was packed from the floor to the ceiling.”

Byrd Drugs had everything from prescriptions to pots and pans.

“We had perfume, cosmetics, toys, magazines, just anything that you needed or might need,” Joe said. “We had to order directly from the supplier so we had to store what we ordered on shelves and in the basement. The drug store was the Walmart of those days.”

Evenly stayed home for 10 years to raise their two sons and she left the drug store to her husband.

“It was where he worked and I decided he should be the one to run it and keep it the way he wanted,” she said. “When I started teaching again, I helped at the store only if Joe need-ed me, which was not that often.”

“I tell my employees to know their customers,” he said. “I want our customers to feel like they are at home when they come through the door. That’s the kind of place Byrd Drugs was for me and is for me. I want it to be like that for everyone else.”

Today, Valentine’s Day 2018, Joe and Evelyn Watson will celebrate 50 years of ownership of Byrd Drugs. The drug store has change in some ways but, in the best ways, it has re-mained the same. Joe Watson greets his customers with the same big smile that won Eve-lyn’s heart and has held it into the Golden Anniversary years.

“We didn’t celebrate our 50th wedding anniversary in any special way,” she said. “Just be-ing with Joe at the lake was special enough.”

Today, Joe and Evelyn Watson are celebrating their 50 years of ownership of Byrd Drugs and the legacy her dad began in 1940. On this Valentine’s Day, they want the community to know how deeply appreciative they are for 50 wonderful years in downtown Troy and of the many friends that have made it possible.