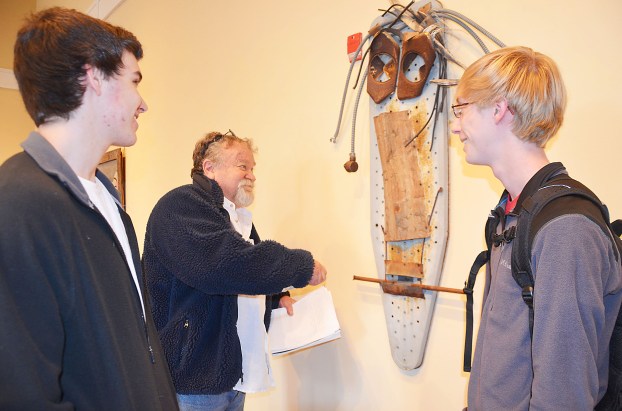 Troy University students Sterlyn Eiland and Thomas Smothers visited the Johnson Center for the Arts with Russell Everett’s Visual Arts class. They were attracted to the 3D artwork of Charlie Lucas and were amazed that junk can be turned into art that they actually like. Everett, center, viewed Lucas’ work as a stroke of genius.

Russell Everett’s Visual Arts class at Troy University visited the Johnson Center for the Arts Thursday to view the exhibitions of two outsider or found objects artists, Charlie Lucas of Selma and the late Lois Wilson of Fayette.

Everett huffed a little at the title “visual arts” class.

“It should be ‘art appreciation,’” he said. “This class should be nothing more than an attempt to begin to cultivate an appreciation for art. These students need to understand that art is not just a dog or a flower. Art can be free standing like Charlie Lucas’s “one speed” horse or his warrior made of found objects.”

Everett said Lucas’ metal sculptures are different from a woodcarving.

“If the arm breaks off a wood carving, you say, ‘oh, man,’ but if something goes wrong with a metal sculpture, you can take a welding torch to it and keep going,” he said and added that students should be exposed to different art mediums and know about the processes.

“We had 20 students here today and only five of them have been to an art museum,” Everett said.  “Some of them are from Montgomery and there’s a nice art museum there but they say, ‘why go?’ That’s why this should be an art appreciation class. They need to know and they need to go.”

Everett said the Johnson Center of the Arts is an impressive art gallery.

“The exhibitions change often so it’s a good place to come to see the works of different artists and the different kinds of artwork that is being produced,” he said.

Everett’s students were free to roam the JCA’ upper and lower galleries and decide which artist’s work appealed to them.

“His art looks like he went to the junk yard and picked up things and put them together,” Eiland said. “I like the way he used junk to make something interesting. And it is interesting.”

Smothers agreed that Lucas’ work is interesting, especially the sculptures that are identifiable.

Dior Brown and Olivia Nobles raised their eyebrows as they viewed Lucas’ work.

“It’s too abstract,” they agreed. “We like Lois Wilson’s exhibit.”

“It makes you feel something,” she said. “Her painting of the weeping willow gives you a feeling of peace, of serenity. Abstract art doesn’t do that for me.”

Nobles agreed that Wilson’s work causes the viewer to “feel something.”

“To me, it has a country kind of feeling about it,” she said. “It has a lot of detail and you understand it. You relate to it. It’s about the kind of people we are. I like it.”

Whether the students liked the artwork of Charlie Lucas or Lois Wilson or neither of them, Everett said he is pleased that they stepped inside the JCA and that they were exposed to the artwork of two different styles of outsider art.

“I hope that they will come back and be exposed the work of other artists,” he said. “The more you are exposed to something the more likely you are to ‘get’ it.”

The Pike County Bulldogs won a slow deliberate basketball game 25-21 in overtime to claim the Class 3A Area 4... read more