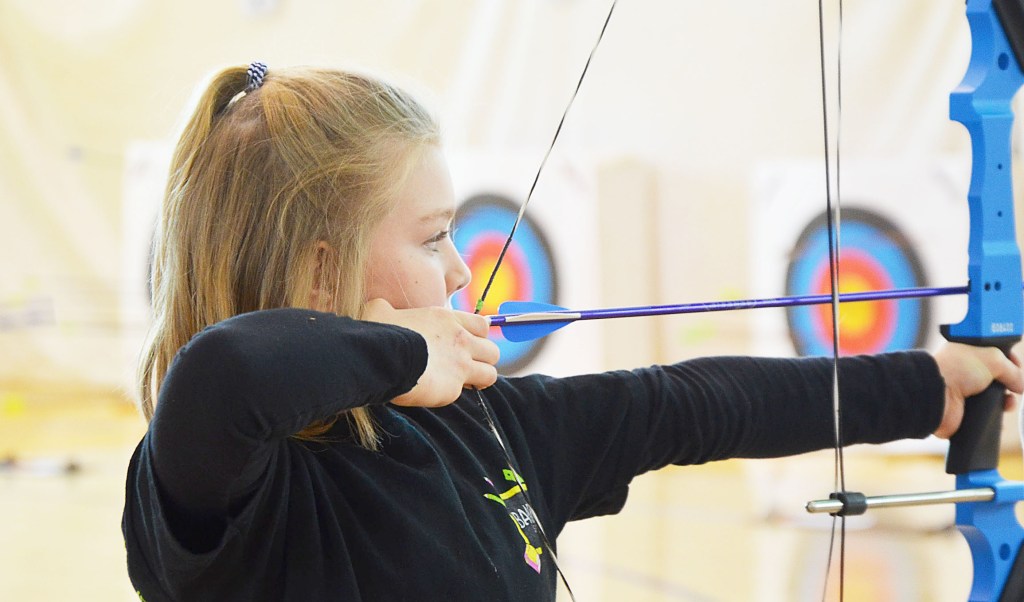 Banks student Madison Faulkner notches an arrow before a shot at the National Archery in School Program Regional Tournament Thursday at the Troy Recreation Center.

Banks School is hosting the 2108 National Archery in School Program (NASP) Regional Tournament underway at the Troy Sportsplex. The tournament began on Thursday and will conclude today. Eight schools in the region are participating including Banks, Goshen and Troy City Schools.

Jonathan Thompson, tournament director, said 305 archers are competing in three divisions, elementary, middle and high school, for the opportunity to participate in the state NASP tournament in April.
“The regional tournament is bringing a lot of excitement to the area,” Thompson said. “The kids are having a good time and the parents are really engaged when their kids are shooting. There is also a lot of excitement about the 3D targets. The kids are having a lot of fun shooting at the animals. We would like to thank the Pike County School board for making theses targets available to us.”

The NASP tournament will conclude with the awards ceremony around 3 p.m. today.

NASP was created in 2002 by the Kentucky Department of Fish and Wildlife Resources to address the lack of archery in physical education classes at public schools.

Scott said Thompson, who teaches at Banks, has done an outstanding job planning and preparing for the tournament.

“It seems that everything is going well and we appreciate all of his efforts to make this tournament a success.”