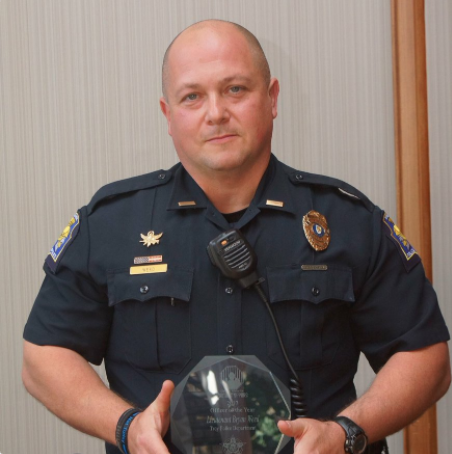 Troy Police Chief Randall Barr calls Lt. Bryan Weed a “man of outstanding character; a man that exemplifies all the qualities that one would look for in a police officer: honor, integrity, courage and loyalty.”

Central Alabama CrimeStoppers recognized Weed as one of their 2017 officers of the year at a luncheon Wednesday, January 31 in Montgomery.

“It’s an honor to be recognized,” Weed said. “I don’t feel like I do anything any more than all the other officers that work at the department. I’ve been blessed to be able to work for a department as professional as ours in a community that I’ve lived in my whole life. I feel honored to be able to serve and live here. It’s like that saying ‘it’s never work when you enjoy what you do’ and I enjoy going in every day.”

Weed has been employed with the Troy Police Department for sixteen years and has served in many different areas within the department. He has progressed through the ranks and currently serves as a lieutenant in the patrol division. Weed has also worked in narcotics, is the commander of the Emergency Response Team and, as an FBI Certified Firearms Instructor, he assists with training and weapons qualification within the department.

“Lt. Weed has always shown a willingness to help in any area that he may be needed,” Barr said. “He continues to help with administrative duties by conducting initial interviews with potential employees for all positions within the police department and he assists with public information as needed.

“Lt. Weed is a proven leader within the Troy Police Department and the community that he serves. He is dedicated to his family and sets a great example for others to follow.”