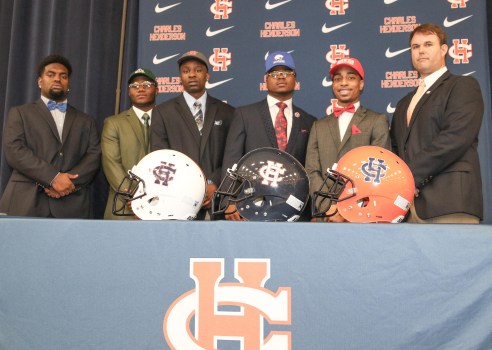 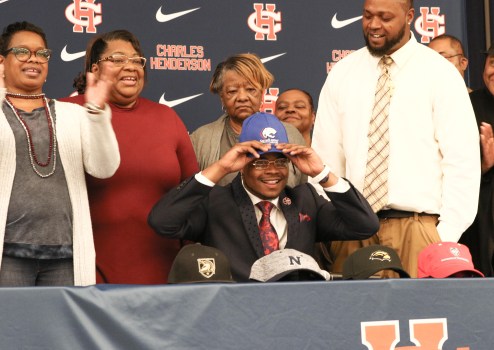 Wednesday morning, that daydream became a reality for five Charles Henderson High School football players, and if they ever did drift off in class, they also made the grades to excel in the classroom, as well as the football field.

In a ceremony held on the campus of CHHS, Tobias Dillard, Jordan Dix-Hudson, Jacob Griffin, Kendarius “Bo” Robinson and Jared Wilson all signed a national letter of intent to play college football.

CHHS Head Coach Brad McCoy was proud of his five young men, their contributions to the Trojan football program, and their hard work as well in the classroom.

“Four years ago when we got here we really had to stress academics,” said Coach McCoy. “Sometimes with kids it goes in one ear and out the other, but all five of those made it a mission that academics would come first. They used their God-given ability they had on the football field, and all that merging together gave them that opportunity today.”

McCoy said each player was talented and a leader in their own way.

“Jacob Griffin was a guy that came to us late, he’s very agile, very athletic, a defensive end for us, and he made a lot of plays,” said McCoy. “He was a guy that came to us later in his career, and I’m very proud of him. Jordan Dix-Hudson battled injury at inside receiver, but was very fast and athletic with great hands. He made some huge plays for us down the stretch.

“Tobias Dillard has been with us for four years at interior defensive line, he can play end, and is very versatile and very physical. Kendarius Robinson moved to us two years ago from Park Crossing, and that was like a blessing that fell out of the sky. He is an immense player. And of course Jared Wilson I think is the epitome of Charles Henderson football, and the City of Troy. He comes from a great family and is a great person. I am very excited for Jared and all of these guys for days to come.”

Wilson, had offers from many schools including Army, Navy, Air Force, Southern Miss, UAB, Morgan State, The Citadel and the University of West Georgia, before choosing the University of South Alabama in Mobile.

“At South I knew I was going to get a lot more playing time,” said Wilson. “At the military schools I would have had to of gone to a prep school for a year and then start my freshman year. It’s also closer to home, while the others were nine to 18 hours away, and now my family can come watch me play.

“The most important person for me was Phillip Jones, my running back coach. He’s been with me since my freshman year, and the one that got me here today, and pushed me to work hard and to be the best that I can be.”

Tobias Dillard was thankful of his time at CHHS, and he is looking forward to the future.

“I’m real excited, it’s a dream come true, to get to play at the next level,” said Dillard. “I’m just blessed. I just felt like I was at home at Union. I liked the campus, and I believe I will do good up there. I will play either defensive line or linebacker there. It’s been a lot of work here at Charles Henderson, there were not any days off.”