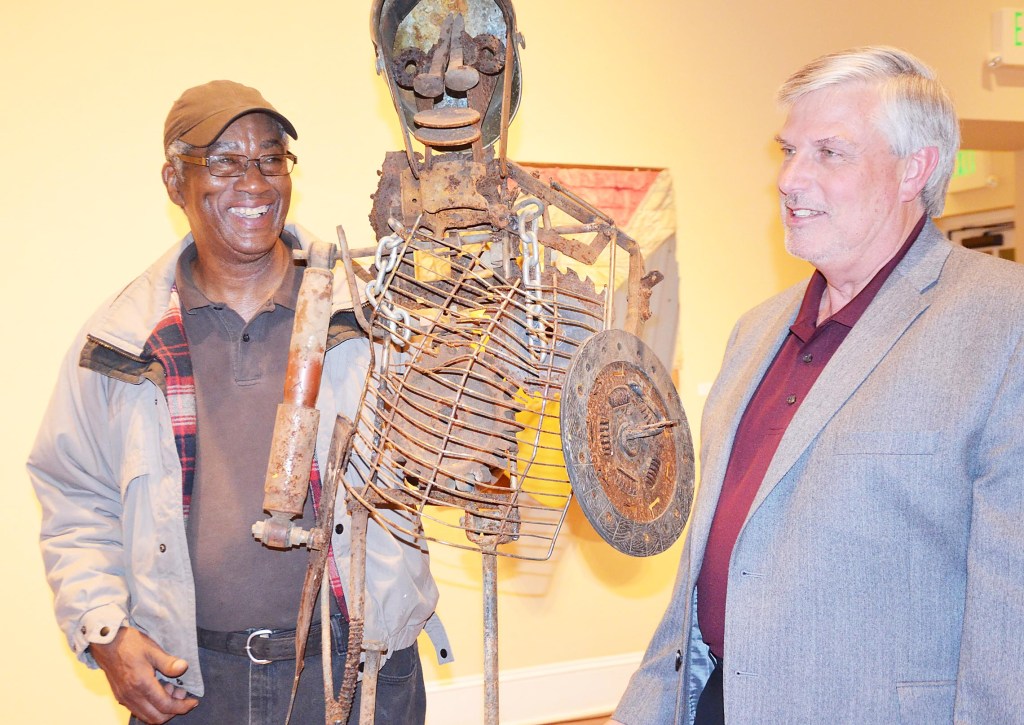 Every piece of artwork that Alabama artist Charlie Lucas creates has a story.

But the stories Lucas told at the reception in his honor at the Johnson Center for the Arts Thursday night had more to do with life and the living of it than his art.

The found objects artist from Selma was funny and he was philosophical.

He poked fun at the times in which we live. Times when the drive-thru is now the Sunday dinner destination rather than grandmother’s house. Times when people put their names on the bumpers of their cars and wings on buffalos are trendy restaurants.

He entertained the audience with stories of his long and close friendship with the late Kathryn Tucker Windham, Alabama’s legendary storyteller. He shared a story of the time they went to an ice cream shop. He got one flavor and she got another.

Sitting there at the counter, he gave her a lick of his ice cream and she gave him a lick of hers.

“When we started to pay, the lady behind the counter wouldn’t take our money,” he said. “She said with entertainment like that, they ought to pay us. People couldn’t believe the friendship that we had. But Miss Kathryn was a dear, sweet lady and I do miss her.”

Lucas described himself as a humble person who came up hard but with the determination to make something of himself.

“I worked in the fields and I worked hard,” he said. “When I was 13 years old, I went out on my own and I’ve been on my own ever since. When I was a boy, I made toys so I kept making toys, only big toys. I made the toys out of whatever I could find. I’d learned to put things together by watching my daddy work on cars and my granddaddy that was a gunsmith and that caned chairs and my great-granddaddy that was a blacksmith. I learned from them and from my mama. She made quilts.”

Lucas said he has a strong belief in God and that faith has taken him from where he was to where he is today.

“Every morning when I get up, I turn my face to the sun and I pray,” he said. “That brings me close to God.”

Lucas said his faith in God and his relationships with people like “Miss Kathryn” bring about a change in his heart that is so precious that he sometimes doesn’t know what to do with it.

“When you take a journey, it takes a long time,” he said. “God gave a gift to me and a journey to take. I see something new every day. And, when I can’t see the magic in things and the beauty in life, in all that’s around me, then that’s when I’ll quit doing art.”

Bill Hopper, chair of the Troy-Pike Cultural Arts Center, said Lucas’s presentation was an experience no one had anticipated and expressed appreciation to him.

“Your artwork is beautiful and, Charlie, you are a beautiful man,” he said.

The Charlie Lucas exhibition will close on February 11 as will the Lois Wilson exhibit that is featured in the JCA lowery gallery. The late Lois Wilson is also a found objects artist.

The JCA is open from 10 a.m. until 5 p.m. Wednesday through Friday and until 3 p.m. on Saturday. Admission is free.