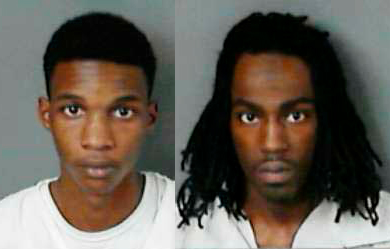 Two suspects in a burglary and shooting Wednesday night have been arrested after a tip led investigators to their supposed getaway car.

Quentin Newson, 23, and Shyhem Jackson 20, were arrested Thursday on one charge each of third-degree burglary in connection with the case.

Thomas said the suspects fired three shots at a neighbor witnessing the burglary and that the neighbor then returned fire.

“The car was hit in the rear and he also shot out one of the tires,” Thomas said.

According to Thomas, a development led investigators to Southland Mobile Home Park, where deputies found the car.

“We recovered from the residence a clip and 9mm ammunition and also two rounds of 9mm ammo on the floor of the vehicle,” Thomas said. “We were advised by on of the subjects that they had thrown the gun from the vehicle and we feel confident that he is telling the truth. Both have confessed.”

Thomas said the investigation is still in process and investigators are hopeful that the TV stolen from the residence will be recovered.

Both suspects are incarcerated in the Pike County jail on the burglary charges and Thomas said more charges are pending regarding the shooting.

Third-degree burglary is a Class C Felony punishable by 1 to 10 years in prison.