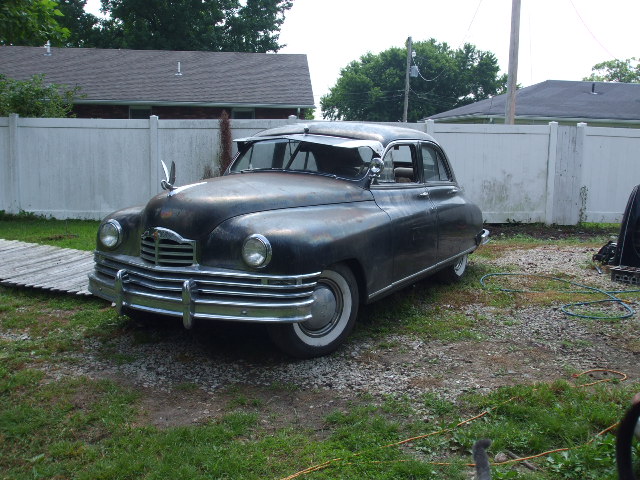 This 1949 Packard went missing sometime between Jan. 11 and Jan. 26 from the access road between the Econolodge and Julia's restaurant.

When Jean Brunton’s trailer broke while travelling through Troy, he decided to leave the trailer and the car sitting atop it in the town until he could get it fixed.

But when he returned with the part he needed, the trailer and car were gone.

Now, Brunton is asking for the public’s help in finding the vehicle.

The car is a black 1949 Packard Super 8 four-door sedan that Brunton said he hasn’t even gotten the chance to drive yet.

He was driving back to Tampa, Florida when he said a hub broke on the trailer, so he stopped to try to get it fixed but couldn’t get the right part. So he pulled it onto an access road at Julia’s Restaurant and Econolodge and stayed for the night and then continued his travel without the car and trailer.

“I asked the owners of the motel and the restaurant and both of them said it was fine to leave it there,” Brunton said.

He ordered a replacement while in Florida and then brought it back to fix the trailer on Jan. 11, but it wasn’t the correct part, so he left again and ordered a new part.

When he returned again, both the car and trailer were gone.

“I called the police department, the sheriff’s office and all the towing companies around,” Brunton said. “None of them knew anything about it. I’m hoping somebody saw who took it.”

Brunton said video surveillance by one of the neighboring businesses goes back to Jan. 21 and shows the car already missing by that date.

Troy Police Chief Randall Barr said he has spoken with Brunton and is aware of the situation, but no report has been filed at this time.

Anyone with information on what may have happened to the vehicle can call Brunton at 352-345-2877.