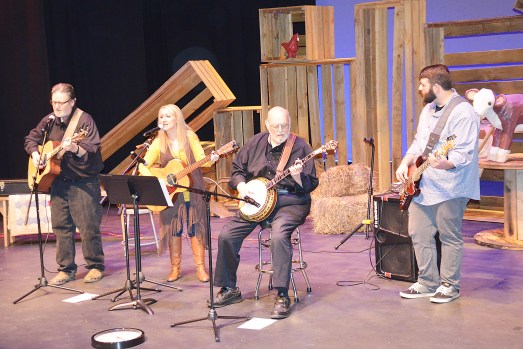 The Lighthouse String Ensemble was a featured band at the Pike Piddlers Storytelling Festival Friday at the We Piddle Around Theater in Brundidge and the Trojan Center Theater in Troy. Other bands were The Benton Brothers and The Hendersons. 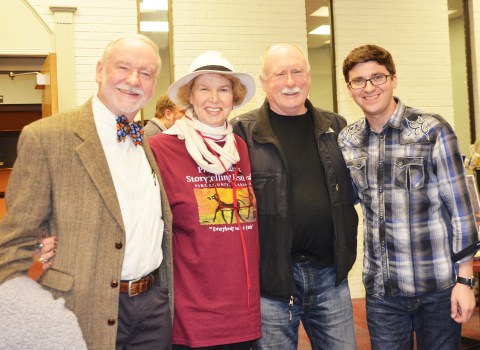 New Yorkers, Marsha Carlin and Tim Torpey stumbled across information about the Pike Piddlers Storytelling Festival in Pike County the last weekend in January. They made Pike County a destination and fell in love with the art of storytelling. The Festival was the “highlight” of their tour of the South. Pictured with Carlin and Torpey are storytellers, Donald Davis, left, and Josh Goforth, right.

Those who attended the 2018 Pike Piddlers Storytelling Festival in Pike County this weekend were treated to a grab bag of emotions from belly laughs to tears that could not be held back.

“I always take Kleenex to the festival with me because I laugh so hard I cry and then I cry because I am so deeply touched,” said Trojan Bennie Jinright, who is a regular at the Pike Piddlers Storytelling Festival. “I’m always there and I’m never disappointed. But this year was so special. And, those who were there on Saturday night will understand. I wish everybody could have been there.”

Jinright said storytelling audiences do not give token standing ovations. Those are reserved for performances that command them.

“There were two standing ovations at this festival and both of them were so well deserved,” she said. “But each storyteller was outstanding. Donald Davis, Josh Goforth, Elizabeth Ellis and Tim Lowry — it just doesn’t get any better than that.

Festival goers Marsha Carlin and Tim Torpey are New Yorkers. They have traveled all across the country and many places around the world. The only place in the United States that was foreign to them was the South. So, they decided to spend 40 days south of the Mason-Dixon Line visiting places of historical significance and scenic beauty and others simply for the entertainment of it.

The couple visited the big cities like Natchez and Atlanta. They visited the touristy places including Nashville, the home of country music, and Memphis, Elvis’ stomping grounds.

Torpey found an item of interest on the Alabama Tourism website – the Pike Piddlers Storytelling Festival.

“Jim found the Pike Piddlers Storytelling Festival and we thought that sounded interesting so out of curiosity we decided to make Pike County, Alabama a destination,” Carlin said. “We didn’t know what to expect but this storytelling festival has been the absolute highlight of our trip.”

Carlin said the We Piddle Around Theater in Brundidge was like nothing she had experienced.

“It is an amazing place, so unique,” she said. “The storytellers where incredible throughout the weekend and the music was unusual for us but we loved it.”

Torpey said the Pike Piddlers Storytelling Festival is a place where people from all walks of life come together as one.

In today’s world, Torpey said there is a need for storytelling where there is a common thread that runs through the stories and binds people together.

“Storytelling does that, he said. “We are leaving this festival feeling like we have been at a place where we belonged and we will be back,” he said.

“Around 1,000 people attended the four public storytelling concerts and 400-plus students attended school concerts on Friday” she said. “We want to thank all of those who supported the festival in different ways and all of those who came and enjoyed being entertained with something as simple and powerful as a story.”