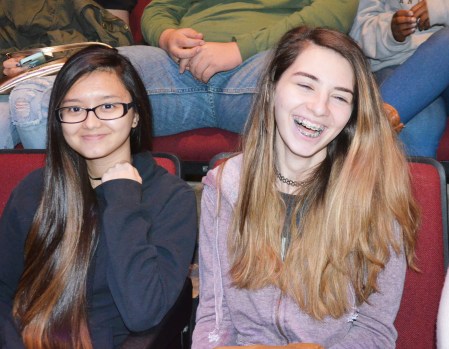 Messenger photo/Jaine Treadwell Sherri Merrell and Jayden Spear were all smiles after Josh Goforth’s performance for students on Friday afternoon. 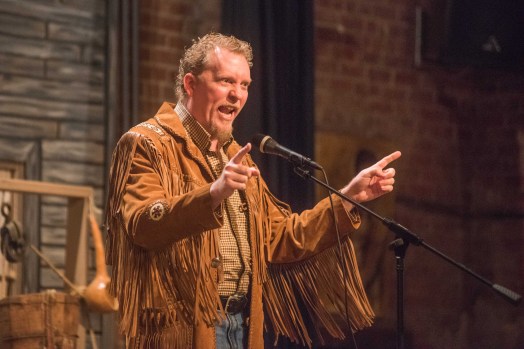 Messenger photo/Jonah enfinger Nationally acclaimed storyteller Tim Lowery talks about many of his adventures out west at the We Piddle Around Theater in Brundidge Friday night during the Pike Piddlers Storytelling Festival that will be going on all weekend.

Storytelling wasn’t what the high school and college students expected.

Perhaps, to a one, the students from Troy University and the four high schools in the county attended the Pike Piddlers Storytelling event at Troy University Friday expecting to be bored to death.

And, perhaps, to a one, they left having been surprisingly “super” entertained.

Storyteller and musician Josh Goforth from the mountains of Western North Carolina was not what the students expected.

“I didn’t know who he was,” said Anna Jordan, a sophomore at Pike Liberal Arts School. “I thought he would be an old man that sat there and played the guitar. He was definitely not what I expected. We all had a great time. His music was fantastic and I loved his stories because they were something we could relate to.:”

On the bus back to school, Anna said everyone was talking about what a good time they had.

“We would all like to see him again,” she said. “We didn’t expect to enjoy it so much.”

Goshen High School students Sheri Merrell and Jayden Spear said, too, they were not expecting the kind of performance they saw.

“Students don’t usually pay a lot of attention at programs and we didn’t know anything about storytelling,” Sheri said. “But it was great, the music and the stories and we were paying attention.”

Jayden agreed that when a large number of teenagers really pay attention, “it’s got to be good.”

Goforth played the guitar, the banjo and the fiddle. He sang songs and told stories.

One of those stories was about his grandfather and there were more than a few misty eyes in the crowd.

“I think that story kind of got to everybody,” said Forrest Dennis, Troy University junior. “Josh Goforth is a great storyteller and he is a great musician. He’s awesome. I would love to see him again. If that’s what storytelling is like, I like it.”

“I had never been up close to a performer before,” he said. “I liked the music and the stories. I’m glad I got to be there. I’ll always remember it.”