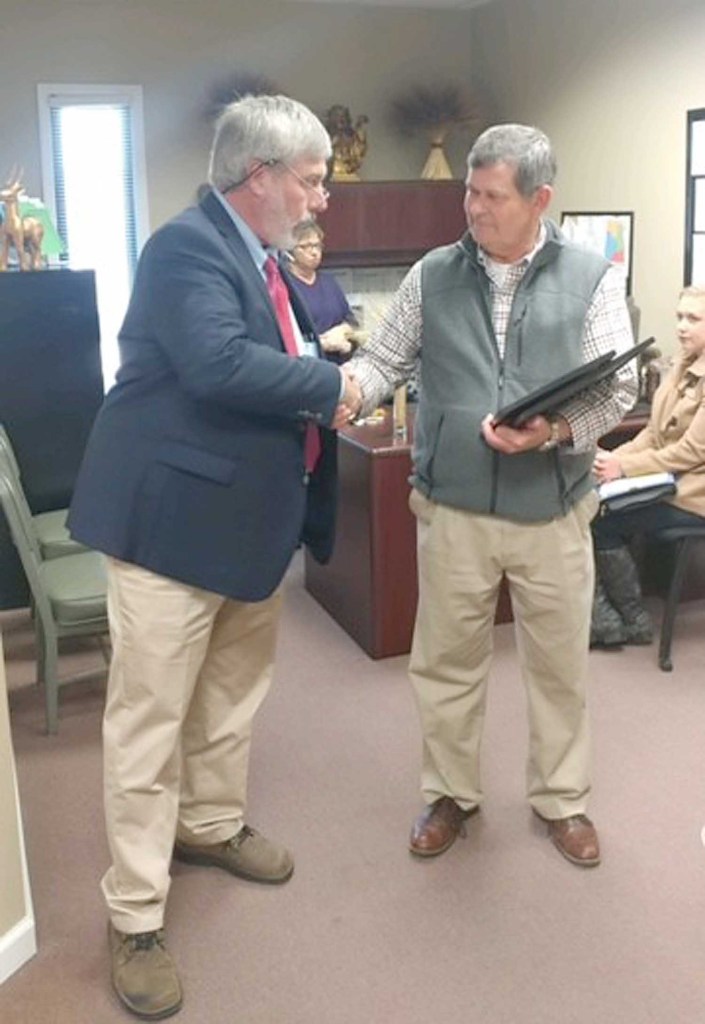 Actually, 34 years and seven months but who’s counting,” Knotts said, with a smile.

“It has been a good 34 years and I have enjoyed working with farmers all across the state,” he said. “Working for the farmers and for the United States Department of Agriculture has been the perfect job for me.”

“Jeff worked with his farmers in the fields and helped them in any way that he could,” McCurdy said. “And, that included the administration of the Farm Bill to the farmers of Pike County.”

McCurdy said he worked with Knotts for 30 years and he was dedicated to his work in and out of the field and was always available to assist the farmers.

“Jeff did an outstanding job for the FSA and Alabama farmers for all those year,” he said. “He will be missed and we wish him all the best.”

It was the encouragement of Knotts’ mother and an icy cold night on an oilrig out in the Gulf of Mexico that pointed Knotts in the direction of the FSA.

“My mother worried about me out on the oil rig but, it was a good job,” Knotts said. “We got to fish and pull sharks up in the crane. But, when the temperature dropped to below freezing and the wind chill was -10 degrees, I decided that job was not for me.”

Knotts’ uncle, Boyd Drinkard, alerted him to a part-time job with the FSA as a field worker in Dale County. He applied and got the job, which he worked he greater part of 1983. He then did field work in Barbour County from 1983 until 1986.

“I went back to Dale County so I could attend Troy University classes after work,” he said.

The class work paid off and Knotts was selected as one of 60 FSA employees to work at the National Headquarters in Washington D.C.

“I worked in the livestock division and I could sit at my desk and look out the window and see the Washington Monument,” Knotts said. “That was something for a country boy that had never even been to Washington before.”

After two years in the nation’s capital and, with all the family and friends’ tours directed, Knotts decided it was time to go back to the home field advantage.

He did compliance work at the FSA State Office in Montgomery from 1989 until 2002, when he became the executive director of the Pike/Bullock Farm Service Agency in Troy.

“Troy is home,” Knotts said. “Even while I was working in Montgomery, we were living in Troy and the children were in school here. It was good to be working in Troy because I could attend the children’s school functions and just be around home more.”

As for his work, Knotts said he enjoyed working with farmers that he knew personally and being a part of the local farming community.

“I enjoyed working with the state, too, and made many friends and developed contacts statewide but it was good to be working at home,” he said. “Working with the FSA was a good decision and I enjoyed my work and the people. I was the perfect job for me.”

The freezing temperatures and icy conditions last week validated Knotts’ decision to look toward the green grass of home.

When the weather is warm enough and the grass is high enough, he will spend many happy hours mowing that green grass.

“I enjoy mowing and anything else that I can do outside,” he said. “I’ve got pine trees and some land that needs seeing about. I’m not in a hurry to find anything to keep me busy.”

Knotts is new to retirement but he is certain that he won’t get bored. He knows how to get busy and stay busy and to, at least, look busy. And, he doesn’t mind doing nothing.