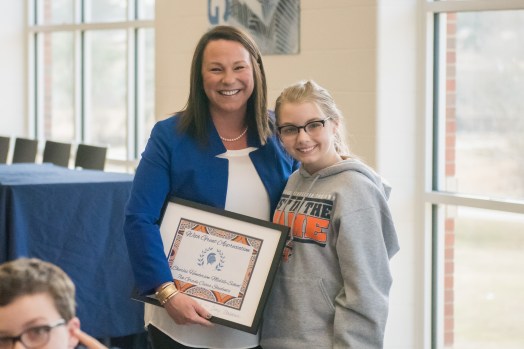 Martha Roby with CHMS student Aicey Hawkins after speaking to civic students at the school.

Roby took a class session with seventh grade civics students at CHMS to talk to them about what the day-to-day life of a U.S. representative looks like.

“The D.C. workweek calendar sets out the number of legislative days we have in D.C.,” Roby said. “So usually I’ll fly to D.C. on a Monday and come back on Thursday or go Tuesday and come back on Friday. Every third or fourth week we get a district work week when I’m home and get to travel around to the 15 counties I represent and meet with people. I use this time to run around and be with my constituents so when I go back I’ve heard what you have to say and I can be a better representative.”

The students had plenty of questions for Roby, including whether she has ever met the President.

“The first time I met President Trump he came to speak to us at a retreat,” Roby said. “I actually had the opportunity to be in the Oval Office for the first time recently when the President signed a bill to reauthorize NASA. As a part of the subcommittee that worked on the bill I was invited and they allowed my daughter to come as well. There were several astronauts there as well, which was really cool.”

Another student asked what some recent topics are in the House.

“Has everybody heard about the government shutdown?” Roby said. “Remember, I said I’m an appropriator. We pass the bills to keep the government up and running. We did everything we needed to do, but the Senate didn’t do their job, so where did that leave us? It put as at an impasse. The date came for the budget to expire and the Senate still had not done their part.”

Roby said policy concerns about a bill to protect immigrants brought illegally to America as children should not have interfered with the budget-setting process.

“Some senators wanted the government to shut down because they wanted a policy passed that isn’t part of funding the government,” Roby said. “We were frustrated because we were going to talk about that later, but we needed to pass the spending bill. We all want to see a good outcome as it relates to that policy issue, but (Republicans and Democrats) have really big differences as to what that looks like.”

Roby also told the students the government-mandated salary for congress members, $174,000, that she could “get fired” every two years if her constituents chose to elect someone else to the office and that she has never thought about running for President.

She did not rule out the possibility though, telling the students that they should always look out for opportunities they may not expect to ever get.

“It’s never too soon to start thinking about what you want to be, what your priorities are. I would urge you to think about what you might not know.”

Shortly after the program ended, Roby travelled south to Brundidge to address members of the Rotary Club.

Roby painted a much brighter picture of the “state of the Union” than the shadow that is cast over this country by cable news.

Roby, who is serving her fourth term in the House, gave an overview of what she said was a successful year in Congress and predicted better days ahead for America’s citizens.

Roby said Kimber Manufacturing, an upscale firearms manufacturer that is coming to Troy, is an example of the economic upswing in Alabama.

“Kimber will bring 360 high-paying jobs to Troy,” she said. “And Wayne Farms is expanding in Enterprise. Despite cable news, the Alabama economic front is moving forward.”

Roby said 2018 is ripe with challenges and opportunities for all Alabama to recommit to its goals and priorities.

Roby said she favors replacing Obamacare with a patient-centered system that is not run by the government that can lower costs and increase choices through more competitive and fewer mandates.

Roby reemphasized her stand on abortion and her dedication to America’s veterans.

“I am unapologetically pro-life and I will fight for life at every stage,” she said.

She said it is critically important that our country does all it can to care for its veterans and ensure the integrity of their service and sacrifice.

Roby said she will always fight to improve education laws with policies that reflect a more conservative, state-driven approach to education.

She also spoke directly to students from Pike County High School who were in attendance, telling them that when she entered New York University, her goal was a career in music business.

However, opportunities presented themselves that led her to law school and to a unique opportunity to serve her country in the United State Congress. Just like the students at CHMS, she advised that the students should be ready for the opportunities that come their way.

“Set goals for yourself, but keep your eyes wide open,” Roby told the students. “Being alert to new opportunities could lead you in a different direction. You can be anything you want to be if you take advantage of the opportunities and accept and meet the challenges along the way.”