‘THE DEAN’ DONALD DAVIS IS BACK TELLIN’ TALES 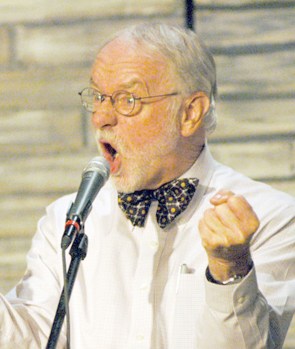 during the 2011 Pike Piddlers Storytelling Festival at the We Piddle Around Theater in Brundidge, Ala., Friday, Jan. 28, 2011. (Messenger Staff Photo/Thomas Graning)

Anyone who has ever heard the Dean of Storytelling, they will agree that Donald Davis is a master at his trade.

Davis of Ocracoke Island will return to the Pike Piddlers Storytelling Festival and Brundidge and Troy this weekend and, as always, by popular demand. No one will be more excited about Davis’ return than “Doc” Kirby, local radio personality and Troy University professor.

“The first time that I was aware of Donald Davis was when I was reviewing a cassette for his publisher, August House —  and ‘cassette’ tells you how long ago that was,” Kirby said laughing. “I was blown away by how clever and funny Donald Davis was and what marvelous stories he told. From then on, every time his publisher put out a new catalogue, I hurried to see if there was something new by Donald Davis.”

Kirby has a yea-high stack of Davis’ cassettes and CDs. He listens to them often and laughs just as hard as if he were hearing them for the first time.

“Hearing Donald Davis on tape is wonderful but nothing is as terrific as seeing him perform stories about growing up in the rural area of North Carolina,” Kirby said. “Personally, Donald Davis is such a nice gentleman and, that he is such a strong supporter of the annual Pike Piddlers Storytelling Festival, is really wonderful.

“There are few things that you can purchase that will give you as much enjoyment as this annual storytelling festival. And, to see all of these storytellers for such an inexpensive ticket is a great opportunity. It’s the best bargain in town.”

Davis will  join Josh Goforth from the mountains of Western North Carolina,  Elizabeth Ellis from Texas and Tim Lowry from South Carolina on stage at the We Piddle Around Theater in Brundidge (Friday, sold out) and the Trojan Center Theater on the campus of Troy University on Saturday.