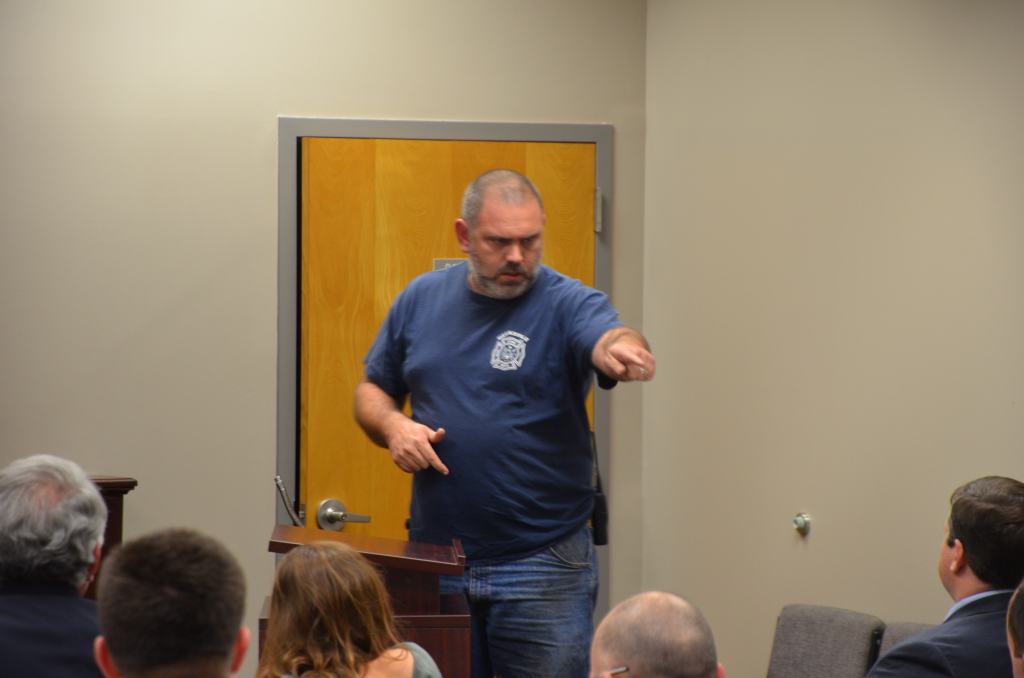 Local residents packed out a public hearing Monday on whether the county should vacate a portion of County Road 7717 to Lockheed Martin, the only abutting landowner.

“Our opposition referred to this inconvenience as though this was simply the shortcut to the property,” said Vernon Wells, Henderson’s attorney. “It’s not a shortcut; it’s the convenient way to go, the way they’ve been going for decades. It adds 2.5 miles not only to his access, but to the access of the (Meeksville) fire department.”

Meeksville Fire Chief Lewis Davis was also in attendance to make his case known against the vacation of the road.

Davis demonstrated how closing the road would add to response times by asking Baker, sitting mere feet away from the podium at which Davis was speaking, to hold his breath while Davis walked around the perimeter of the room to respond.

Nearly 20 seconds later, Davis arrived to Baker and told him to breathe.

“Three, four or five miles doesn’t mean anything until you need it,” Davis said. “I lost my home to a fire when the Troy Fire Department couldn’t get there in time. I don’t want another 9-year-old to have to go through that.”

Baker and other Lockheed Martin representatives responded that they would sit down with Davis and set up a way for security personnel to have gates open for responders in the case of an emergency so the department could use the road as they do now.

In response to Henderson’s concerns, Baker said they shouldn’t be considered strong enough to deny the petition.

“It could be deemed a small inconvenience, but (Reynolds Henderson) is a resident of Rosemary Beach, Florida, and Jeremy Henderson lives in Hawaii,” Baker said. “Travel time for residents of Florida and Hawaii would not be sufficient reason to deny this request. It would be awful to inform a potential employee that they can’t be hired because of access to their… adult playground.”

In response to issues brought up about how utilities would access any existing lines on the site, commissioner Chad Copeland, District 4, said he had verbal acknowledgement from South Alabama Electric Cooperative and the Pike County Water Authority that they were comfortable with the road being vacated to Lockheed.

In answer to another of Wells’ objections, county attorney Allen Jones said due diligence shows Lockheed Martin as the only abutting land owner to the portion of the road that has been petitioned for vacation, despite the petition originally being worded as Lockheed owning “nearly all lands” abutting the northern and southern portions.

Wells also referenced the Alabama Supreme Court’s decision in the case of Thetford v. Town of Cloverdale to suggest that it is not a valid reason to vacate a road merely for the benefit of “individual interest or pleasure.”

“We have to maintain 1,250 feet from any public road,” Carson said. “A lot of those things restrict our ability to expand facilities. We’re in the process of building two facilities right now where we have the ability to do that. We’ve grown from 298 jobs to 460 since I’ve been here and expect to be at 500 with expansion. I can’t tell you how many jobs we’ll bring, but I can guarantee if we have no room to expand we will add no additional jobs.”

In addition to Davis and the Hendersons, many other residents in the area came to voice their concerns over the road closing, including a man who said the closure would add 13 miles of travel to visit his parents’ graves and a woman who said her two “hay men” would both have to go out of their way to reach her property without the road open.

Keith Roling said the closure of the road would simply shut down one of the few smooth roads in the area and force people to travel down rougher paths.

The county commission chose not to make a vote on the issue at their regular business meeting, saying they had more due diligence they would like to do based on all the questions local residents brought up.

“Meetings like tonight, there’s a lot of emotion in the room,” Copeland said. “That’s the first real big item we’ve had with this many people come since I’ve been here. I wish we had that many people at our regular meetings. People would be amazed how many items they would be equally interested in.”

The commission could take action on the petition at any of their future meetings, beginning with their next meeting Monday, February 12 at 6 p.m. upstairs at the Pike County Health Department.

Jones said there is no deadline for the commission to take action on the petition.