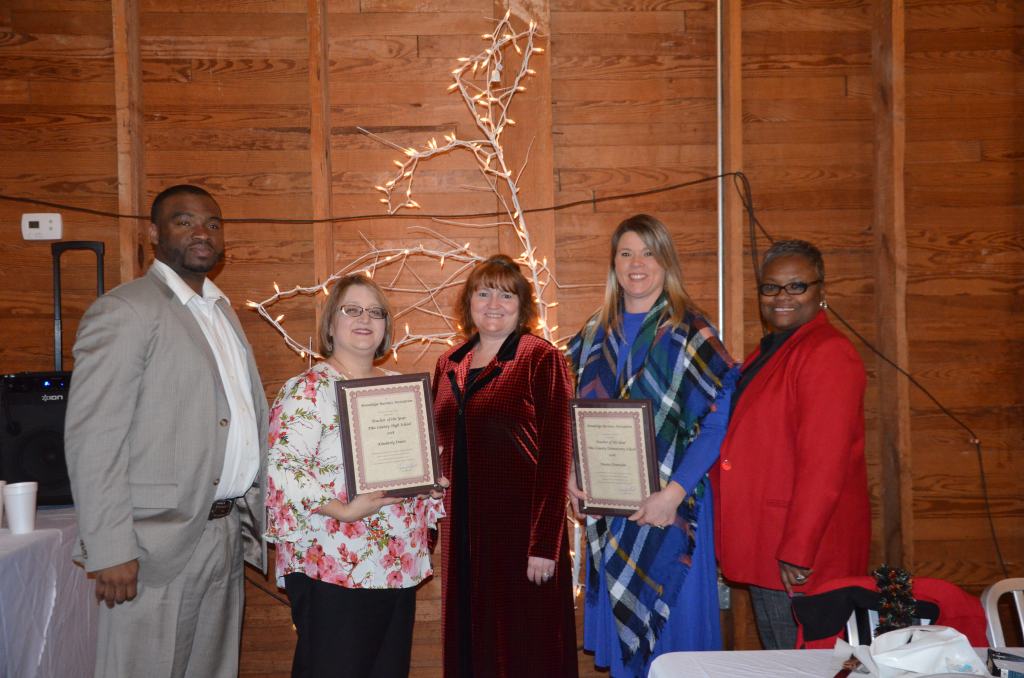 The Brundidge Business Association honored one of its most dedicated and long-serving members with its Person of the Year Award at its annual membership banquet Thursday night at The Warehouse at Collier’s in downtown Brundidge.

Delatha Mobley was described as a “silent giant” because of her dedication, contributions  and willingness to serve her town with no desire for accolades. Mobley has served with only a true desire to help make the City of Brundidge the very best it can be, BBA President Jennifer Garrett said.

“Delatha has helped pave the way for the future of our town and its leaders,” Garrett said. “She has challenged others to do the same.”

And neither is Mobley one to turn away from a challenge.

“If a need arises, Delatha is there to help meet that need,” Garrett said. “Her love for people and for the town she has called home for 65 years has made an impact on everyone she comes in contact with.”

Being a parent of school-aged children Mobley had a vested interest in the quality of education in the Pike County Schools.

“She felt very strongly the members of the board should have children in the schools so she ran for a seat on the Pike County Board of Education and served from 1976 – 1984,” Garrett said.

“Her vision for Brundidge was for revitalization and preservation of the integrity of our town,” Garrett said. “She traveled with other BBA members to Louisiana to view an ‘antique city’ and brought home many ideas that were successful in bringing visitors to our own ‘Antique City.’”

In support of Antique City, Mobley partnered with another business owner and opened Abe’s Antiques in downtown Brundidge. Later, in 1983, she opened Mobley Business at her home and then moved to a downtown location. She purchased a building but did few renovations because she wanted to preserve the integrity of the downtown landmark.

As an owner of a downtown business, Garrett said Mobley is an instrumental participant in the annual Peanut Butter Festival in October and the yearly Veteran’s Celebration and Independence Day Parade.

“Delatha’s  church home in Salem Baptist Church and has been for more than 63 years,” Garrett said. “Her faith and willingness to serve Christ have been evident as she has been active in many of the programs and ministries offered at her church and the surrounding area.”

Mobley is married to Lawrence Mobley and they are the parents of four children, the late Sheryl Mobley Fleming, Ronny Mobley, Lindy Mobley Wood, and David Mobley.

The BBA recognized the Teachers of the Year at Pike County Elementary School and Pike County High School, both in Brundidge.

In introducing Neana Fountain, PCES Principal Tracy Arnold said she is an outstanding teacher who has the abilities to share her knowledge of subject matter with other teachers as well as she is able to share and communicate with her students.

Fountain expressed appreciation to the BBA for the recognition.

“PCES is a great school with great students,” she said. “I am proud to be a part of such an outstanding school.”

PCHS Principal Willie Wright said Kimberly Dunn has been willing to move where she is needed and has now found her niche as the school’s media specialist.

The BBA membership recognized out-going president Jennifer Garrett for her remarkable leadership and then turned the gavel over incoming president Kathy Sauer.

Garrett will continue in a leadership role as BBA vice president. Tonya Williamson will remain treasurer and Laterria Baxter as secretary.