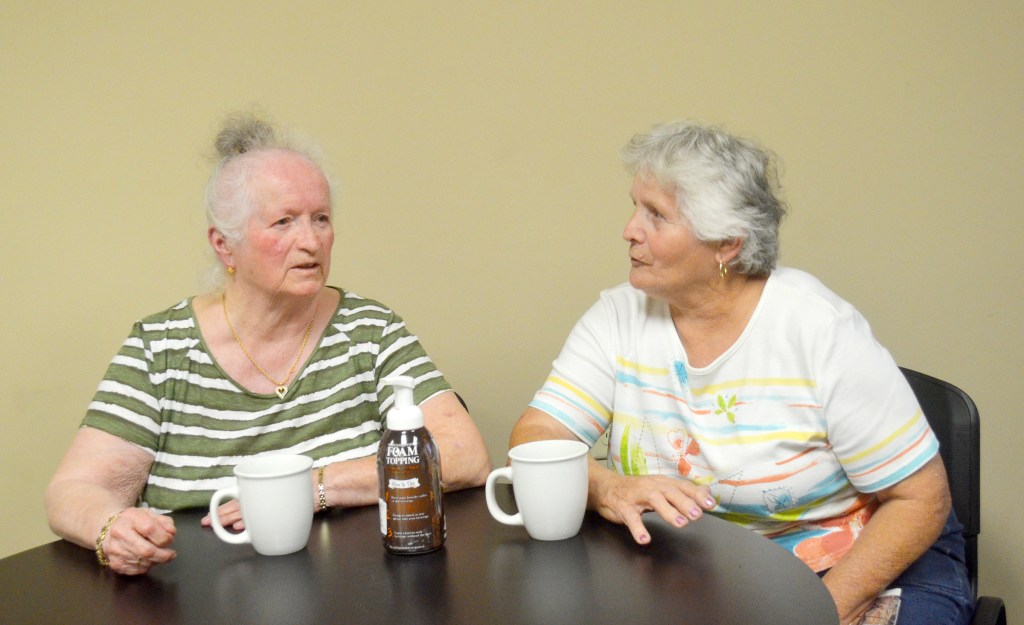 Messenger photo/jaine treadwell Jacqueline Miller and Yvonne Jacques, sisters from the village of Gondreville, France, reminisce on the dark times of World War II. The sisters lived in a cellar for five years with 26 neighbors afraid to step out in the daylight for risk of being tortured or killed by German soldiers.The sisters say it is important to tell their story so that people never forget the horrors that occurred in those years and learn so that those same mistakes are not repeated.

The sisters laugh at the differences between them. Then, the mood quickly changes as they recall their childhood days in France during World War II.

Jacqueline, the prissy one, lives in West Virginia and is visiting her sister in Luverne. They make the effort to spend extended time together each year because doing so fills a longing in their hearts.

The sisters grew up Gondreville, a small village in France. For a time in their childhoods, Gonderville was a safe place, a warm and caring place. Then in 1939, things changed. War came, the Germans came, and there was no safe place.

“Churches, hospitals and schools were supposed to be safe places but they were not,” said Yvonne, who was just over five years old and three years older than her sister, when war came to their village.  “My mother had seen troubled times coming but nothing like what came to us.”

For the next five years, Yvonne, Jackie and their family shared their root cellar with neighbors, 26 in all, as the hiding place from the Germans and as a bomb shelter when the sirens sounded.

“From the kitchen, there were dark, steep steps that led into the cellar,” Yvonne said. “We could go outside and play for a while but we did not go to school because it was not safe to be there. When we heard the sirens, we knew to run inside and hide. From 1939 until 1944, that is the way we lived, running and hiding.”

Because their mother was forward thinking, she had a storehouse of home-canned food in the cellar – vegetables and even rabbit meat.

“But we had no milk, no bread and it was two walking hours to the next village where we could possibly get those rationed things,” Jackie said. “We would go at late night, after midnight.  Between the villages there were three concentration camps and the prisoners were hungry – starving. They slept outside and, as we walked along the back roads, we would run and throw carrots over the fence to the prisoners and they would run and push to grab them because they were so hungry.”

Yvonne said conditions in the prisons were so dire that, as the war stretched into years, the prisoners would eat rats and dogs and human flesh.

To close the road to Gondreville, the Germans commanded young French soldiers to cut down huge trees with crosscut saws and pile them on the road.

“When the soldiers had cut all the trees, the Germans shot and killed them all,” Yvonne said. “You cannot know what it was like, so horrible. Our father was in the French Resistance and we were always so afraid for him. Once we were playing outside and the Gestapo was coming to all the houses. We ran to tell our father and he told us to go back and play. The Germans would know he was there if we were in the house.”

The sisters have haunting memories of a baby being nailed to a church door.

“The Germans took the baby and crucified it because the mother could not tell them where her husband was,” Yvonne said. “There were prostitutes who would tell on their own people, give them up. After the war, the prostitutes were rounded up and their heads were shaved and tar was put on their heads so everybody would know about what they had done.”

The sisters said walking anywhere in or around the village was treacherous because mines were everywhere.

“People would be walking and step on a mine and be blown away,” she said. “Planes would fly over and drop candy in pretty paper and children would run to get the candy bomb. It would explode. So many children were hurt and died.”

Because there were no doctors, the women would close wounds with needles and thread. “They would sew people up, like they were pieces of cloth,” Jackie said. “There is nothing that can relate to living through a war. We were in the cellar all the years of our young childhood. Always watching for the Gestapo and listening for airplanes and running at the sound of sirens. Always sitting with the lights off and fearing for ourselves and our father.”

The sisters said no child should have the knowledge of a baby being placed in a bakery oven or nailed to a church door. Those are things too horrible to know and too painful to remember.

One day, in August 1944, the church bells in Gondreville, France begin to ring. The nightmare was beginning to be over. The townspeople came out of hiding and rejoiced in the streets.

“The Americans came in jeeps and gave us candy,” Jackie said. “We were singing and so happy. We had a ball. And, our soldiers came home.”

Yvonne had contracted rheumatic fever and was so weak she could not stand.

“When I saw my uncle, my favorite uncle, come walking toward our house, I could not wait to get to him,” she said. “I started crawling to him. Like a baby, I crawled to him.”

But among the happiness, there was still sadness for those who did not come home from that war.

It was five years after the war ended that one of the sisters’ cousins was to come home in a casket.

“The locks on the casket were covered in melted wax. Our aunt want to open the casket to see if it was really her son,” Yvonne said. “She melted the wax and opened the casket. Inside there were three skulls. She melted the wax back over the locks. The casket is buried in the cemetery in Gondreville with three unknown soldiers inside.”

The sisters tell their story because it is important not forget that the people of France suffered greatly during WWII. That they had no freedoms for five years and that many lives were lost and others destroyed.

“When people see movies about World War II, we want them to know that it’s not a story. It happened and happened so terribly,” they said. “War is horrible. Just as we, in Gondreville, walked arm-in-arm in the streets when the war was over, we must all walk together so war like that never happens in our world again.”