Brundidge loses a cornerstone in Moultry 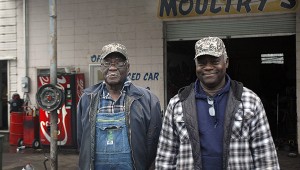 James Albert “Punch Moultry (right) stands next to his son Willie Moultry after Moultry’s Service Center was named “Business of the Year” by the Brundidge Business Association in 2014.

James Albert “Punch” Moultry was the son of a sharecropper.

Nothing came easy to him but that didn’t keep him from achieving his dreams and loving the life he lived.

Moultry was one of those iconic small town characters that make life of others a bit more interesting and enjoyable while making the road ahead a little smoother.

As word of Moultry’s death on Saturday spread around Brundidge so did the sadness.

For as long as most people can remember, Moultry has been a part of the city’s scene, driving through town in his red pickup truck at 30 miles per our chewing on a cigar that he never lit.

“I’ve been knowing Punch since I was in high school and he worked at Johnson’s Garage,” Carter said. “He was always laughing, joking and picking at you. Punch was as good a man as you’ll ever find. He was the kind of man you were proud to call a friend. I thought the world of him.”

Not even his son, Willie Moultry knows why hid dad was called Punch but most people in and around Brundidge know him by that name. And, probably most have enjoyed a light-hearted conversation with him at Moultry’s Service Center, 365 Barr Street in Brundidge. He “entertained” customers as only he could.

Moultry was born south of Brundidge and life was a struggle for his family. He was no stranger to hard work and his first paying job was at a sawmill.

“My dad could do a lot of things and, when the sawmill ran out of log work, he could do other things so he got more work than the other workers,” said Willie Moultry, who followed his dad into the auto repair business. “He left sawmill work and worked for Colin Sheffield at his station down on South Main Street. He washed cars, changed oil and pumped gas.”

But Moultry knew he could do more.

“My dad said he believed the station could do more business if they started replacing brake shoes and water pumps,” Moultry said. “It did and that changed the business.”

Punch Moultry went on to work at Johnson’s Garage and, with that added experience, he was ready to open his own business. In 1972, he got a Small Business Loan and, of the 72 loans that were approved in Pike County during that time, Moultry was the only one that paid his loan back in full, his son said.

Punch Moultry bought land and borrowed a dump truck and hauled in the dirt to level the property for his service station.

“He didn’t get a loan large enough to do what he wanted to do,” Moultry said. “He didn’t have enough money to put doors on the shop, so he took all the tools home a night until he could get money for the doors. It was a struggle but he worked hard and it paid off for him.”

The Moultrys were honored with the Brundidge Business Association’s Business of the Year Award in 2015. They expressed appreciation for the local support that had enabled them to stay in business in Brundidge for more than 40 years.

But for Punch Moultry, it was not all work and no play. He liked drag racing and was good enough at it that he won a few trophies.

“He didn’t have the fastest car on the drag strip and he didn’t care about winning trophies or money, he just loved to race,” Moultry said. “He was known around the track as ‘Burnout Man,’ because he would burn so much rubber that you couldn’t see the car for the smoke. He loved drag racing and he loved his church, New Zion Baptist, and he loved Brundidge and he loved people.”

Brundidge Mayor Isabell Boyd said Punch Moultry was a cornerstone of Brundidge for many years.

“He was a kind and gentle person,” she said. “He was always willing to lend a helping hand to anybody that needed it. I never heard him say a negative thing about anybody. The work he did helped keep Brundidge on the move. People depended to him to keep their vehicles working. They trusted him and he never let anybody down. He will be missed but his influence will continue to play a role in the forward movement of Brundidge.”