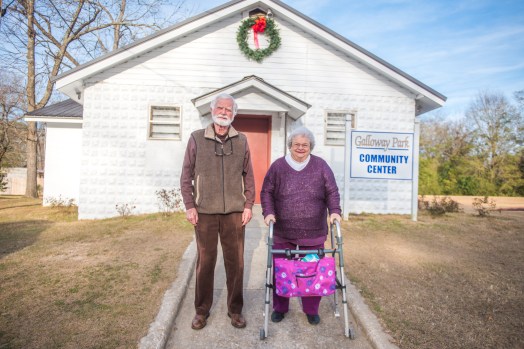 Lawrence and Sara Bowden, above, pose in front of the voting precinct they attended in November. They were photographed on the way to cast their ballots and the pictured was published in the New York TImes. The photograph drew attention from friends across the country. 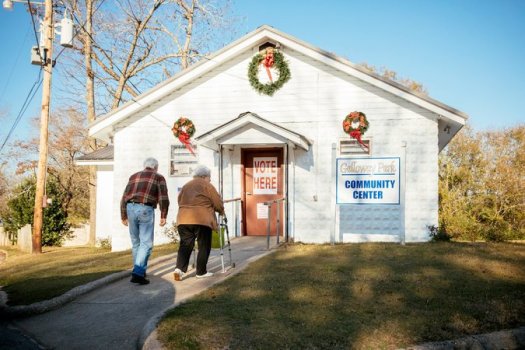 Above is a copy of the originally published photograph (courtesy New York Times).

How many men, or women for that matter, could boast of having his/her photograph in the New York Times and on the front page of The Messenger and getting a Christmas card from President Donald Trump all on the same day?

Lawrence Bowden of Brundidge, laughingly, said “only a select few.”

Bowden continues to get phone calls and emails about the “celebrity” that he must share with his wife, Sara Dickert Bowden.

It all began when the two were doing their civic duty by going to vote on Tuesday, December 12. As they were making their way into Galloway Park, Sara Bowden said she noticed a woman in a coat crouched on the ground.

“As we got closer, the woman got up,” she said. “Two men were standing there and one of them asked if we would like to have our pictures in The New York Times. How could we turn that down?”

The woman identified herself as a photographer with the big city newspaper and asked permission to take the Bowdens’ picture. They agreed and the photographer snapped a photo of the couple as they walked to the Galloway Park voting center.

“We didn’t think any more about it until our granddaughter called to tell us that our picture was in The New York Times,” Sara Bowden said. “Then, other people started to call. They all said they recognized me. I didn’t know I was so recognizable from behind.”

Had it not been that so many people recognized his wife, Bowden said they probably would not have achieved the notoriety.

“Nobody recognized me so, in hind sight, if they had not recognized Sara– we would have just been two old people going in to vote,” Bowden said, laughing.

The couple said being in The New York Times added a little extra joy to their Christmas. They heard from people all around the country at this special time of year.

And, also, he has an icebreaker and/or conversation item on the refrigerator door.

“Only a select few – about 18 million — got a Christmas card from the president,” Bowden said. “But what I was proudest of was the picture of me serving at the We Piddle Around Theater.”

Bowden and his wife are charter members of the theater’s signature folklife play, “Come Home, It’s Suppertime.” He has appeared in every production of the play’s 16-year run.

That means more to him than a picture in the “Times” or a Trump card.