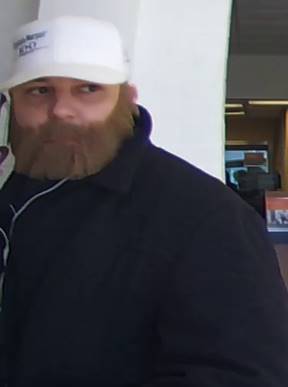 Messenger photo/submitted Montgomery officials are seeking information on a suspect they say robbed a financial institution on Atlanta Highway on Friday. The suspect, pictured above, wore a fake beard during the robbery.

Montgomery Police Investigators released photos of an unknown subject wanted in reference to the robbery of a financial institution located in the 5300 block of Atlanta Highway at approximately 1:09 p.m.  Friday.

Investigators described the suspect as a white male who appeared to be in his mid-20s to early 30s, wearing a fake brown beard, 6’2” to 6’3” in height, 250 pounds, wearing a black/white button down stripe shirt, black jacket, blue jeans, white Captain Morgan hat and black shoes.

The suspect managed to slide a note to the teller and took an unspecified amount in US currency. He was last seen driving down Atlanta Highway in a silver four-door Hyundai Elantra Eastbound.

If you can identify or know the current whereabouts of this subject, please immediately call the Police or Crime Stoppers at 215-STOP.

Your tip may lead to a cash reward.