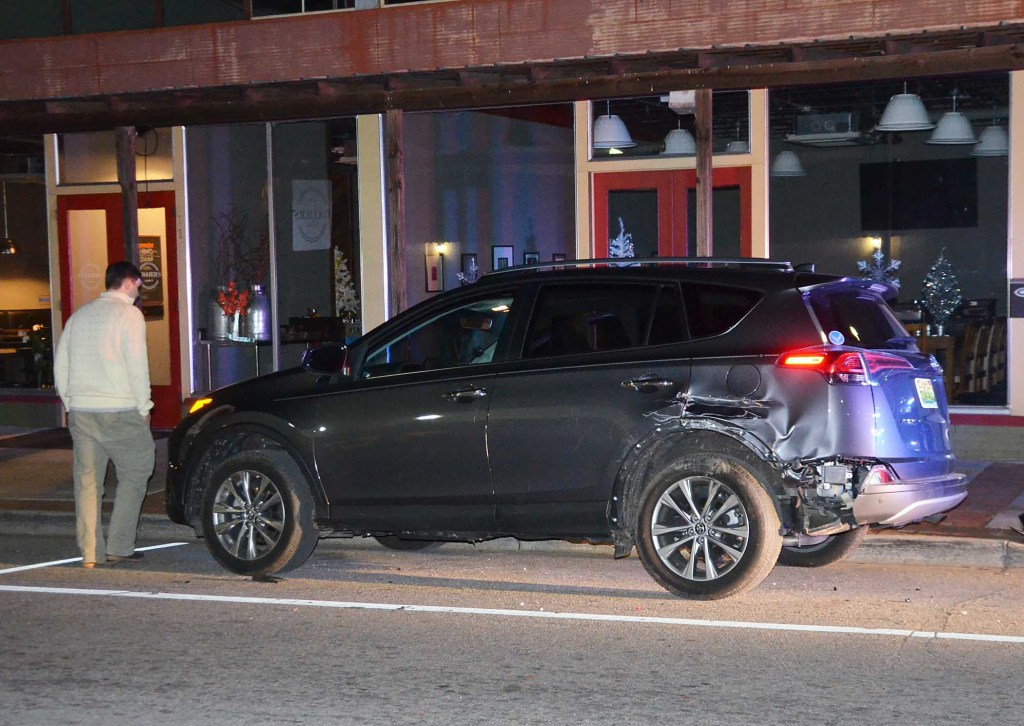 The Christmas lights that are a 65-year tradition in Brundidge were unstrung for a second time this holiday season when an 18-wheeler hit the support pole on the corner of East Troy Street and Main Street Tuesday night. The driver of the Leon Jones Feed & Grain rig failed to make the turn, hitting the pole and then damaging two vehicles that were parked on North Main Street.

The truck first struck a pole that was temporarily in place to accommodate the city’s Christmas lights. The truck then struck at vehicle that was parallel parked in front of Collier’s on Main and then sideswiped another vehicle that was also parked along the street.

Brundidge Police Chief Moses Davenport said several vehicles that were traveling north to south along Main Street were stopped at the traffic light, causing the truck driver to have to make a tighter turn than usual.

“There was nothing illegal about the turn,” Davenport said. “He just cut the turn too sharp and hit the pole, knocked it down and the lights with it. From there, he went on to hit the two vehicles. I can’t say how that happened.”

This was the second time a portion of the city’s historic Christmas lights has been taken down by an 18-wheeler this holiday season.

Davenport said it is not easy for drivers of 18-wheelers to make the sharp turns necessary onto and off of Main Street at the crossroads in downtown Brundidge.

“Those are sharp turns and they are especially to hard to make when other vehicles are stopped at the light and in their turn path,” he said. ‘Sometimes the drivers of the stopped vehicles have to back up to give the big trucks room to turn.”
Davenport said 18-wheelers are a part of the Brundidge downtown traffic.

“We’ve got to find a way to handle the truck traffic so that we can eliminate some of the problems we are having now,” Davenport said. “The City Council is considering putting signs up that will direct some of these big trucks onto Highway 231 when it’s not absolutely necessary that they come through the downtown area.”
Brundidge Mayor Isabell Boyd said the council is looking closely at the truck traffic situation.

“We are looking at signage that would direct these truck drivers along the best route for them and to the benefit of the city,” Boyd said. “We want to find a solution that will work for the truckers and for the residents of the city. There is a solution or maybe solutions to the concerns that we have. We’ve got to decide what is best and then do it.”