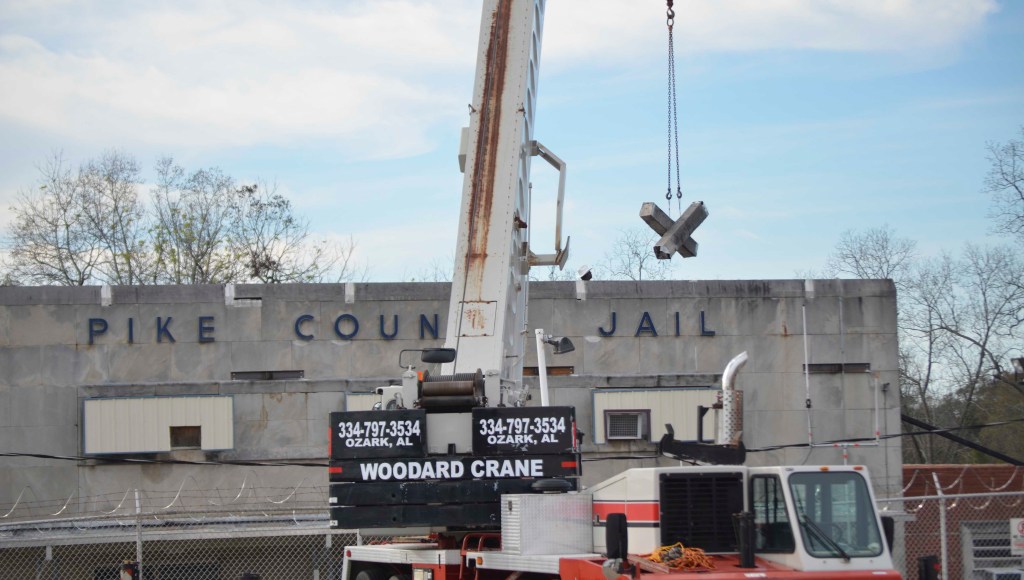 Work is underway at the Pike County Jail, where construction crews are working to shore up the building. County officials say the jail, which was built in 1957, needs to be stablized and made safe while commissioners explore options for constructing a new, modern correctional facility.

It’s been a year full of changes for Pike County, including one that only comes around about twice a century.

The county commission began the year with on major goal: secure funding to construct a new jail.

“We knew we had one of the older jails in the state, so we had an understanding of where we were at with our jail,” said Harry Sanders, county administrator. “We had managed through that issue for several years now, but it became apparent we couldn’t go any further when the sheriff (Russell Thomas) reported some of the problems arising. We knew we were not going to be able to continue to maintain what we had there.”

So the county sought for a way to fund this new jail, which they projected could cost up to $8 million that the county doesn’t have.

They soon settled on a temporary sales tax of 1.5 percent in most of the county to fund the project, except in Troy, where the temporary tax is only 0.5 percent.

“We appreciate Sen. (Jimmy) Holley and Rep. (Alan) Boothe for being strong partners in this,” Sanders said. “The commission could not have ventured into building a new jail without their help.”

Boothe and Holley passed the local bill authorizing the commission to raise the sales tax in the summer and by October, the new tax rates were in place.

“So with the funding in hand to build the jail, we’re busy trying to make sure that after 60 years that we do a good job on this one,” Sanders said. “We’re taking it slowly and judiciously trying to answer all the questions as best we can… We hope that whatever we construct now will be as resilient as what we’re replacing now.”

The commission enlisted the help of TCU Consulting Services to create a plan for the construction of the new jail and to conduct a study into what specifications it will need to meet to adequately serve Pike County for years to come. TCU began their work in September and are expected to have completed their study by February.

In addition to the sales tax hike and the study into the jail construction, the county also set aside money for the first time in years to go toward local roads.

“Our commissioners have really worked hard and are continuing to work hard,” Sanders said. “It’s a small amount of money; we wish it was more. But it’s a start.”

The county also decided to switch over to a mass notification system for the Emergency Management Agency instead of tornado sirens and to assist the 911 center with viewing pertinent information when a call comes in.

“The mass notification system is a better way, Sanders said. “We still have sirens that give warnings, but there are just so many times where that’s just not enough… we feel is going to be of tremendous importance as we move forward.”

As the new year begins, the county is seeking to follow up behind the City of Troy and legalize Sunday alcohol sales. The county passed a resolution in December requesting authority from the state legislature to hold either a referendum or commission vote on the issue.