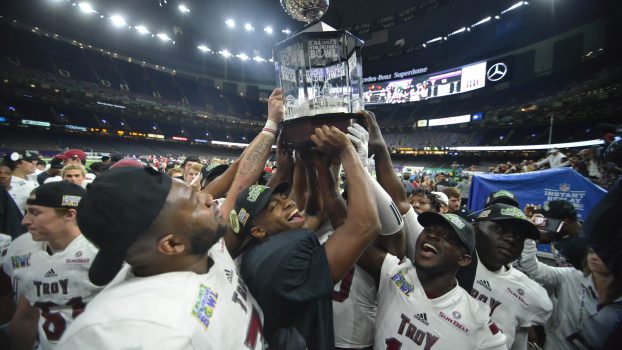 The 2017 athletic year was historic for the teams of Troy University, with three teams taking home conference titles. Both on the field and the court, 2017 was a year to remember for players and fans alike.

The men and women’s basketball teams both won Sun Belt crowns in the 2016-2017 season and did something that has never been done in program history: advance to the NCAA Tournament in the same season.

Head coach Chanda Rigby led the Trojan women to an NCAA Tournament appearance in 2016 with playmakers Ashley Beverly Kelley and Caitlyn Ramirez. In the 2016-2017 season, Beverly Kelley was gone, leaving Ramirez, Amanda Mendoza and others to fill the void.

After losing their season opener to Auburn, the Trojans rattled off five consecutive non-conference wins. The Trojans finished the non conference slate with a 7-4 record after playing notable teams that include Tennessee, Jacksonville, Auburn and UAB.

In the finals, the Trojans got 13 points from ArJae’ Saunders in their 78-64 win to claim the Sun Belt championship.

The first round of the NCAA tournament didn’t go the way the Trojans had hoped when they fell to Mississippi State 110-69 in Starkville.

“It was a huge blessing and it was very special,” Rigby said. “We have been in touch with all seven of those seniors and all of them are employed. They graduated from Troy and they are employed. That goes back to how they found a way to win. Whatever the challenge was, they would rise to it.”

The men’s basketball team had only made the NCAA Tournament one time heading into last season. When the season began, there wasn’t much optimism that 2017 would bring trip number two, but that is exactly what happened.

The Trojans didn’t have a spectacular regular season, finishing 22-15 overall and 10-8 in conference play. It was the first time Troy reached the 20-win mark though since the 2009-2010 season.

The Trojans finished the regular season with a 57-54 win over Little Rock and they entered the tournament as a sixth seed.

Round 2 brought Georgia Southern to the Trojans and Troy made easy works of the Eagles, winning 90-70 thanks to 52 combined points by Wesley Person and Jordon Varnado. After an easy win over Georgia State, the Trojans went up against Texas State for the conference championship.

Varnado and Person again led the Trojans, combining to score 34 points in a dramatic 59-53 win over Texas State.

The Trojans drew perennial power Duke in the opening round of the NCAA Tournament.

The Trojans hung around with the daunting Blue Devils. They went into halftime trailing 52-38. In the second half, the Trojans were outscored 35-27 and ultimately fell to Duke 87-65. Varnado led the way with 19 points, while Person had 15 and Alex Hicks had 14.

“March was an incredible month for us,” Cunningham said. “Heading into the tournament we felt like we were playing as good as anyone else in the league. It was a great experience to not only win the tournament, but be a part of March Madness. I think playing Duke on a national stage added to it more.”

The Troy football team returned much of their production from the historic 2016 season. After finishing with 10 wins for the first time in the program’s Division-I history, the excitement level was high heading into 2017.

Neal Brown began his third season at the helm and with quarterback Brandon Silvers and running back Jordan Chunn entering their senior seasons, the time was now for the Trojans.

The Trojans opened up the season with a road showdown with Boise State. Despite getting an interception returned for a touchdown by Blace Brown, the opener was a letdown for the Trojans when they fell to the Broncos 24-13 for an 0-1 start.

The Trojans bounced back and defeated in-state foe Alabama State 34-7, New Mexico State in the conference opener and Akron at home 22-17 in dramatic fashion to improve to 3-1.

In Troy’s next game, the Trojans traveled to Baton Rouge to take on SEC power and nationally ranked LSU under the lights. Heading into the game, a lot of questions circulated about the two pervious meetings between the two teams that saw the Tigers sneak away with late wins. In 2017, the Trojans held the lead throughout the game. With the Trojans up by three late in the game and the Tigers driving, the Trojans clinched the 24-21 win with a Brown interception.

The Trojans garnered national attention with their win over the Tigers. Coach Brown made appearances on ESPN and radio stations across the state.

The Trojans returned home after a bye week to take on in-state rival South Alabama and everything came crashing down when the Trojans fell to the Jaguars 19-8.

The loss dropped the Trojans conference record to 1-1 on the season.

They didn’t lose the rest of the season.

The Trojans rattled off six straight wins including a 32-25 win over Arkansas State in the season finale to claim a share of a conference championship. Silvers led the Trojans down the field in the game’s final minute to score the winning touchdown.

With a 10-2 record, the Trojans had an opportunity to claim win number 11 for the first time in program history when they took on North Texas in the New Orleans Bowl.

The Trojans left little doubt in their 50-30 win.

Head coach Mark Smartt led the Trojan baseball team to a 31-25 overall record. Of their 31 wins, 16 of them came in conference play. The Trojans finished in fourth place behind Coastal Carolina, South Alabama and Georgia Southern.

The Trojans fell in the opening round of the conference tournament to the second seeded South Alabama 9-1.