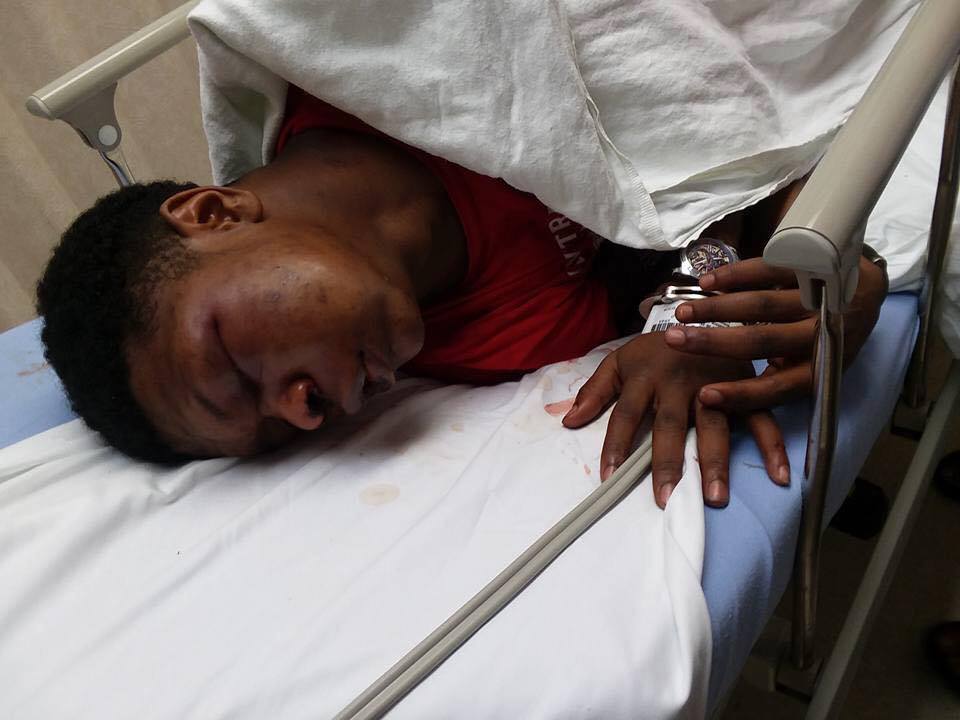 A photo shared by Angela Williams shows her 17-year-old son Ulysses KeAndre Wilkerson with a bloody and beaten face after a confrontation with Troy police late Saturday night.

National civil rights attorneys are stepping in to help get answers for the family of a teen beaten during an encounter with the Troy Police Department.

Ulysses KeAndre Wilkerson, 17, was arrested after a foot chase that began shortly before midnight on Dec. 23. Police Chief Randall Barr said the teen refused to comply with officers’ commands, leading to the use of force. Social media photos showing Wilkerson in a hospital room with a beaten and bloodied face quickly went viral, drawing national attention.

The family has now retained civil rights attorneys including Benjamin Crump, a lawyer who represented the families of Michael Brown, Trayvon Martin and Tamir Rice in nationally televised cases.

Dustin Fowler of the Dothan firm Buntin, Etheredge and Fowler said Thursday his firm is now representing the family along with Crump.

“We will do everything in our power to seek justice for Ulysses Wilkerson, an African-American teenager who was brutally beaten at the hands of police in Troy, Alabama, on Dec. 23,” the attorneys said in a statement.

The attorneys say they have been in contact with the State Bureau of Investigation, which has taken over the case, and said the bureau is working diligently towards getting answers. “The family is adamant about the community staying engaged to help seek for justice for their 17-year-old son,” they said. “This is not just a matter of black and white, it is a matter of humanity.”

In search of answers

“I know there is some body cam video and audio as well,” Anderson said. “I only know of one officer that was directly involved that did not have body cam video.”

Anderson said he has not spoken with Troy officers since Christmas and is waiting for the State Bureau of Investigation (SBI) to finish its investigation and report before commenting further.

Jackson had posted on Facebook Thursday that he and his organization “spoke with Pike County District Attorney Tom Anderson hours ago” and that Anderson told them “some of the officers involved in the beating of 17-year-old Ulysses Wilkerson were not wearing body cameras.”

Jackson maintains that Anderson did speak with a representative of his organization.

Another question that the family and activists want answered is whether an officer involved in the incident has been placed on leave.

Troy Police Chief Randall Barr said that the officer has been on leave since his shift ended the night of the incident and that the officer would not be returning in a field capacity during the course of the investigation. He would not say whether the leave was personal or administrative.

“If he comes back to work, it will not be in an enforcement role,” Barr said.

Local residents and activists from outside the community have planned a rally in support of the family at 11 a.m. Saturday outside the Troy Police Department to seek answers. Among the demands of protestors is the release of body camera footage of the incident.

Barr said a request to hold the rally at the Troy Police Department has been filed and said the department is willing to facilitate the protest.

“We want that to be a peaceful and safe event for them and everyone involved, which includes us and citizens that live here everyday,” Barr said. “We’re going to provide them with a place to have their voices heard and for them to be safe.”

The family is holding a press conference today at 9 a.m. and the Pike County branch of the NAACP will hold a press conference at 4 p.m. calling for an “immediate and comprehensive review of the City of Troy Police Department’s policies, procedures, practices and conduct. The purpose of the review is to ensure an event such as Mr. Wilkerson’s will never be repeated, and all citizens are treated fairly and equitably.”

Local churches are also responding to the incident by organizing a community-wide prayer service at First United Methodist Church Saturday at 9 a.m.

The prayer service is actually one of a series that began last year following national incidents including the fatal shootings of two black men by police officers in Minnesota and Louisiana and a massacre of police officers in Texas in retaliation.

The incident began after officers observed Wilkerson walking out from behind a closed business downtown at approximately 11:52 p.m. Saturday. “Officers approached the subject and as they exited their patrol car, he fled on foot,” Barr said.

Barr said officers pursued the subject on foot to Madison Street. “Officers were able to apprehend the suspect on Madison Street, but he resisted arrest and refused to comply with commands from the officers to place his hands behind his back,” Barr said.

“The subject continued to struggle with officers and kept reaching toward his waistband as if he was attempting to access a weapon, all while repeatedly ignoring officers’ commands to stop resisting and give them his hands.”

It was then that Barr says officers resorted to physical force.

The teen was taken to Troy Regional Medical Center and then to University of Alabama Birmingham. He has since been released.

Barr said officers retraced the path taken during the pursuit and found a handgun lying on the ground, which has now been taken in as evidence.

Wilkerson was charged with obstruction of governmental operations and resisting arrest, both misdemeanors. Barr said Thursday that those charges have not been dropped.

Barr and Mayor Jason Reeves have handed over the investigation of the incident to the State Bureau of Investigation (SBI).

“There has been a lot of speculation on social media about the arrest of a juvenile this past weekend,” Mayor Jason Reeves said Tuesday. “(On) Sunday I turned the matter over to the State Bureau of Investigation (SBI) for an independent investigation. I would caution the public to be calm and patient as we await the final report from the state. Until then, I’m not able to discuss the matter since the investigation is ongoing.”

SBI officer Heath Carpenter said no more information will be released until the investigation is completed and presented to Anderson for a grand jury.

Anderson said the report could be finished and ready to be presented in February to the grand jury.