Family of teen beaten in arrest speaks out 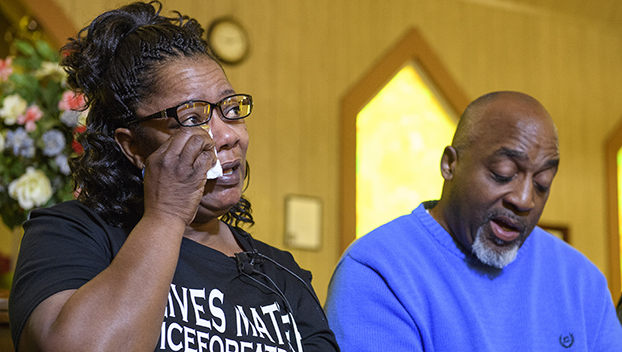 The family of a teen beaten during an arrest by the Troy Police Department held a press conference Friday morning to call for justice in his case.

Ulysses KeAndre Wilkerson, 17, was injured during an arrest Saturday, Dec. 23 after officers say they saw him emerge from behind a closed business in downtown Troy and pursued him to Madison Street before arresting him on misdemeanor charges of resisting arrest and obstructing governmental operations.

“As a mother I was shocked, horrified and devastated to see my son this way, a victim of police brutality,” said Angela Williams, Wilkerson’s mother. “While I’m hopeful that the State Bureau of Investigation will uncover the truth, I still call on the community to take a stand. We will not settle until we know the truth behind the brutal beating of my dear son and these police officers are held accountable for their crime.”

“There’s a lot of rumors out there, a lot of things being said,” said Kenneth Glasgow, family advocate. “We’re not particularly interested in all the rumors and all; we just want the facts… (The family) just wants the truth. They want everyone to remain peaceful – and I repeat everybody remain peaceful – and organized and let’s get down to the truth. None of us know what happened down there.”

Editor’s note: This story will be updated with more information from the press conference.