A TIME FOR CHANGE: Brundidge prepares for growth in 2017 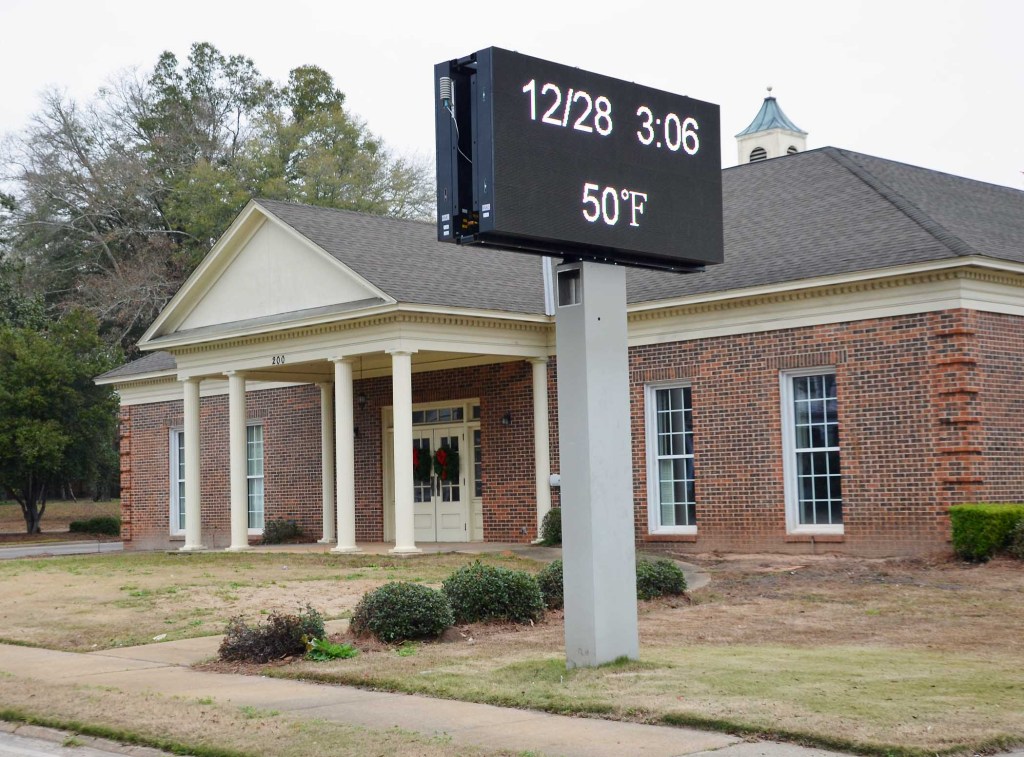 A digital clock is reinstalled at the former BB&T building after the Brundidge City Council purchased the building to transform it into the new city hall.

If Brundidge residents were polled as to the most important happening in the city during the year 2017, the answer would probably be the return of the street digital clock.

When BB&T closed its downtown facility, so went the street clock that residents depended on for time and temperature.

When the City of Brundidge purchased the BB&T building in May, that opened the door for the return of the street digital clock.

Brundidge Mayor Isabell Boyd said the city purchased the BB&T building for $200,000 and the council approved another $200,000 line of credit for the renovation of the building, which will be the new city hall.

Boyd said a larger building was needed to accommodate the offices and operations of the city.
During the year 2017, the city closed out its Clean Water Project, a $2 million project for upgrades to the city’s wastewater treatment facility and the rehabilitation of all the lift stations.

“The access road to the Magnolia Vegetable Processors facility was completed, Boyd said. “The new business offered employment opportunities to about 40 people.”

The mayor cited the growth of the R.E. Barr Nutrition Center as a highlight of the year 2017.

“The nutrition center provides nutritious meals for our senior citizens, Boyd said. “The participants enjoy the fellowship of one another and the activities and events that are provided for them. The nutrition center is a vital part of our community.

“The Tupper Lightfoot Memorial Library continues to offer more programs and events to people of all ages. The library’s hours have been extended to 6 p.m. and several new board members are bringing new ideas and energy to the board.”

The city now has several emergency shelter designations for those who live in mobile homes or live alone and feel threatened by weather conditions.

“Salem Baptist Church, Brundidge United Methodist Church and Galloway Park have been designated at emergency shelters,” Boyd said. “The renovations at Galloway Park are bringing more people to the park and it has become more of a community center for inside and outside activities.”

The remediation of the city park that was closed about 20 years ago is set to begin in the next few weeks at Ramage Park. The remediation will include a walking trail and possible picnic facilities.

“During the summer, we were able to offer swimming classes to our children at the Troy Recreation Center,” Boyd said. “Hopefully, more children will take advantage of this opportunity next summer.”

On October 2, Troy Bank & Trust signed an agreement to acquire First National Bank of Brundidge and is awaiting the approval of the FDIC.

“That sale was big news because First National Bank has been in Brundidge since 1904,” Boyd said. “That will be a big change for Brundidge but we are looking forward to the new opportunities for our citizens.”

Boyd said Supreme Oil facility on the north side of town will close, probably during the first quarter of the new year.

“That will be a loss to the city but we will accept the challenge of replacing it with another industry,” Boyd said. “The city of Brundidge is prepared for industrial growth and we are looking for ways to revitalize our downtown area. We are committed to our community and to making it the best it can be for people of all ages and from all walks of life.”